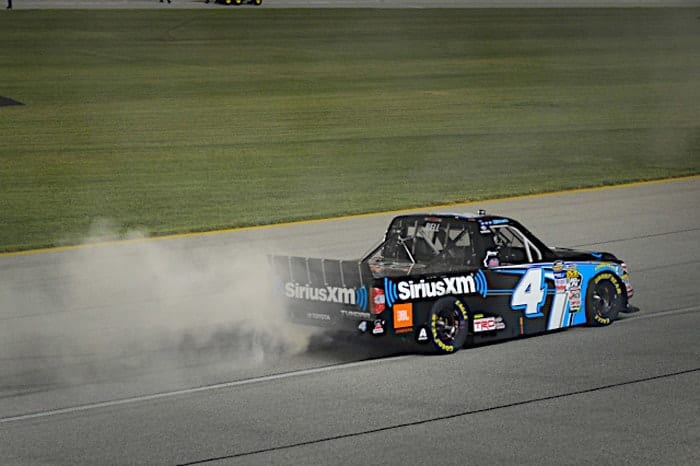 The NASCAR Gander Outdoors Truck Series heads to Joliet, Ill., and Chicagoland Speedway this weekend, and 33 teams are signed up on the preliminary entry list. Barring any changes, one driver will be sent home after qualifying.

Joey Gase is piloting Jennifer Jo Cobb‘s No. 0 this week, while Bayley Currey is driving the No. 1.

Dylan Lupton makes his first start for DGR-Crosley in its new fourth truck, the No. 5 Toyota. His teammates will be in their usual rides – Anthony Alfredo in the No. 15, Tyler Ankrum in the No. 17 and Natalie Decker in the No. 54.

Despite it originally looking like Niece Motorsports would have TJ Bell in its No. 44, Spencer Davis will be driving that machine.

Here it is! Excited to have gotten the call from @NieceMotorsport to run the 44 @TeamChevy Silverado for them this weekend @ChicagolndSpdwy! Thankful for this break to drive for Niece is an understatement. Looking to make https://t.co/wD9CN48jn6 Niece and the guys proud #LetsGo pic.twitter.com/7iAV3U37dP

Meanwhile, Brandon Jones is driving the No. 51 this weekend for Kyle Busch Motorsports.

Josh Bilicki and Jesse Iwuji are in Reaume Brothers Racing’s Nos. 33 and 34, respectively, while its No. 32 is currently listed as TBA.

Ted Minor is trying to make his first NGOTS event since 2017 in his self-owned No. 25.

The Camping World 225 will go green around 9 p.m. ET on Friday, June 28, with television coverage on Fox Sports 1.

I would put my money on Johnny Sauter to win this week in Chicago.