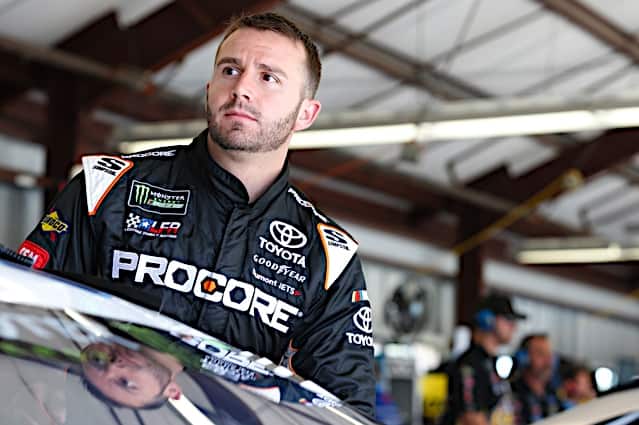 This past Sunday (June 23) was a milestone day for Matt DiBenedetto when he finished fourth at Sonoma Raceway — his first career top five in the Monster Energy NASCAR Cup Series. Despite the result, Leavine Family Racing’s No. 95 holds a worse average finish than each of the past two seasons when it didn’t have support from Joe Gibbs Racing and Toyota.

The top five result could be a sign that the team is on the upswing, but DiBenedetto is only signed through 2019 and Toyota has a plethora of talent in the lower series. This brings the question: Should LFR bring DiBenedetto back in 2020? Michael Massie and Mark Kristl debate.

Of course DiBenedetto deserves another year at Leavine. He hasn’t gotten a fair shot in the No. 95 yet.

It can take a while for a driver to adjust to a new team. Martin Truex Jr. has found instant success at Gibbs, but he still has his crew chief from Furniture Row Racing, Cole Pearn, with him and he was already driving equipment supplied by JGR. But when Truex first showed up to FRR in 2014, he struggled mightily. The team made the playoffs the year before with Kurt Busch and later made the Championship 4 in 2015 with Truex, so it wasn’t a bad team. There were just growing pains between the team.

At LFR, as soon as DiBenedetto got to the team, everything changed. LFR switched manufacturers and alliances, and DiBenedetto was assigned a crew chief, Mike Wheeler, who has been in a slump. Wheeler won races and contended for championships with Denny Hamlin, but went winless in 2018, so his confidence probably wasn’t at its highest entering the season. Runs like Sunday at Sonoma can help get Wheeler back to winning form.

When Stewart-Haas Racing switched from Chevrolet to Ford in 2017, it won the Daytona 500 with Busch right away, but the speed didn’t mean much in that race. From the second race of that season until midway through the year, SHR didn’t win again until Kevin Harvick won at Sonoma. That started the team on the right track, but they still weren’t dominant again until the following season. Similarly, Leavine just had its first good finish of the year at Sonoma, and I expect the team to pick up the pace from there.

NASCAR’s Silly Seasons starts so early in the year before a move that we won’t truly be able to see what DiBenedetto is capable of in that car before LFR has to make moves to keep him or replace him next year. So the best move would be to give him another year with a season’s worth of team chemistry and see what he can do. Otherwise, this season is a waste for everyone.

Christopher Bell and Erik Jones are both more deserving of Cup rides than DiBenedetto, but there is a solution where all three could have a Cup ride and Toyota wouldn’t lose Bell. Jones needs to stay in the JGR No. 20 for another year, and Toyota needs to put the money up for LFR to run a second team with Bell.

Toyota Racing Development is signing all of these young drivers in the lower levels, but it bottlenecks into only five Cup teams — with three drivers who aren’t going anywhere anytime soon. If Toyota wants to keep the talent they develop, then they need to put up the money for another Cup team at LFR with Bell. This would ultimately benefit Bell, as he would have a veteran teammate in DiBenedetto to learn from. In contrast, if Bell is the sole driver in LFR’s, he’ll essentially be thrown to the wolves and he might not succeed.

And if Jones ends up in the No. 95 and it stays a one-car team, then he’ll perform worse than he’s doing now. Jones would be on a team not as good as Gibbs, and he would lose confidence after getting pushed out at JGR. That would be a terrible combination.

So Bob Leavine, sign DiBenedetto back for another year. And Toyota, put some money into another Cup team instead of signing every teenager in the world who’s ever touched a steering wheel. –Michael Massie

DiBenedetto is a Stopgap

DiBenedetto is only 27 years old. He’s not past his prime, but Toyota Racing Development has a pipeline of young talent.

As my colleague, Michael Massie mentions, TRD only has five Cup Series teams. Should they help Leavine Family Racing expand or forge a partnership with XCI Racing or MBM Motorsports? Yes.

Here’s the catch though. If TRD is expanding its Cup Series operations, they need their teams to have top-notch drivers — franchise players, if you will. Is DiBenedetto a franchise player?

No, DiBenedetto is not a franchise player. He has never won in any of the three major NASCAR series. Furthermore, he lacks Gander Outdoors Truck Series experience. TRD uses Kyle Busch Motorsports in the Truck Series to begin drivers’ ascent up the NASCAR ladder. This is the reason Todd Gilliland and Harrison Burton are rumored to be on the hot seat. Both drivers aren’t winning like team owner Kyle Busch expects, and TRD continues to develop drivers, such as Hailie Deegan.

As noted, DiBenedetto earned his first career Cup Series top-five finish at Sonoma. In his career, he has led 73 laps. Fifty of those led laps have come this season, so DiBenedetto is improving, but is it too little too late?

Yes, it is too late.

Bell is the top prospect in NASCAR, and he lacks a Cup Series ride. DiBenedetto has served as a stopgap until Bell is ready to compete in the Cup Series. Bell won the 2017 Truck Series championship. He has seven Truck Series wins and 12 NASCAR Xfinity Series wins, finished fourth, respectively, in his first full-time Xfinity Series season in 2018, and this season is second in the point standings and has won four races.

Bell is the driver who makes team owners salivate, trusting they can sign him and sponsorship will follow. Mark my words, the 24-year-old Bell will be racing full-time in the Cup Series in 2020. The question is with which team? Right now, TRD has five chartered teams. All four Joe Gibbs Racing teams are likely set for 2020 with their current drivers.

That leaves Leavine Family Racing and their No. 95 Toyota. Team owner Bob Leavine recently admitted they are not set for sponsorship for the rest of this season. If they promote Bell to the Cup Series next season, companies may be more willing to come onboard.

If Bell is not driving for TRD next year, he will join William Byron and Bubba Wallace as TRD drivers who left Kyle Busch Motorsports to race for a different manufacturer to ultimately make it to the Cup Series. TRD also lost Kyle Larson along the way.

DiBenedetto has served as a nice stopgap for LFR. He led some laps in the Daytona 500, brought more publicity to the team and drove a Darrell Waltrip-inspired paint scheme at Sonoma.

TRD needs to expand their Cup Series operations. If they forge a partnership with XCI Racing, DiBenedetto could serve as the driver for the team in its first full-time season. He helped BK Racing and Go Fas Racing expand, and he has helped Leavine prepare to take a step up in the Cup Series. However, if Leavine wants to achieve better finishes, Bell is the best driver for its No. 95 Toyota. –Mark Kristl

Well said. Christopher Bell is the most talented driver in NASCAR today and everybody in the garage knows it. If he isn’t signed to the #20 team by EOY, some other team owner will steal him away. You don’t think that #48 driver is in the hot seat this year? Or JR Motorsports with that Smartie, Kelly Earnhardt? Or Tony Stewart? As a plus, Christopher brings that Rheem sponsorship now whether it’s a primary or a block of the inventory. Yes, it’ll be a top-tier ride and he’ll be an instant success.

Not sure he is most talented but certainly the top driver without a cup ride.

The 95 team needs to have continuity for a couple of seasons, that is how a team can actually grow. Give the guy a chance at a second season as the team itself is still learning how to handle and what to do with better equipment than they have ever had.
Teams still need to develop as they mature and consistency within the team helps immensely.

Matt was in position for a top 5 if not a victory at Daytona before being wrecked out due to some other drivers fault. If that had happened this article would never have been written.