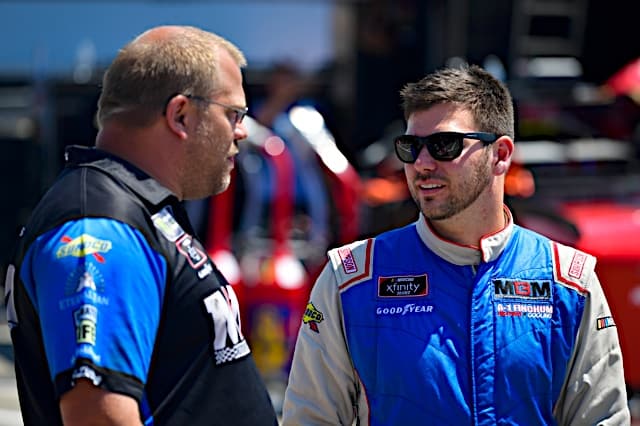 The driver/crew chief dynamic is one of the key components of being successful in NASCAR. This weekend at Chicagoland Speedway marks the one-year anniversary of Brian Keselowski calling the shots for MBM Motorsports driver Chad Finchum.

Keselowski, 37, older brother to Monster Energy NASCAR Cup Series champion Brad Keselowski, has 67 NASCAR national touring starts. The most notable coming in 2011 at the Daytona 500, when his younger brother pushed him to fifth-place in their respective Duel race. But much to his own chagrin, he traded in his firesuit for a headset to lead underfunded teams primarily in 2017.

When driving together — 27 races — the Keselowski and Finchum pairing have a best outing of 14th which happened last July at Daytona International Speedway. Despite their success and trying times, it’s been a process to make it work.

“I’ve seen an improvement in Chad [as a driver], which helps a lot,” Keselowski recently told Frontstretch. “As a crew chief, you can only do so much. You can’t drive it, too. He’s really not torn up a lot of equipment, which helps a lot, and we can just keep getting better instead of trying to fix stuff.”

Being a former driver, Keselowski can put himself in certain situations when Finchum is driving. Admittedly, the two use the “1-10 scale” on describing if the car is too loose or too tight, which is common for many teams.

In present day NASCAR, there aren’t many crew chiefs that have been former drivers. People like Paul Wolfe (16 Xfinity starts) come to mind, who leads the No. 2 Team Penske car for the younger Keselowski brother. Back 16 years ago, Robbie Reiser (32 national touring starts) was atop the pit box for Matt Kenseth when he won the 2003 Cup championship.

Because Keselowski and Finchum are both racers — both drivers believe it gives them a slight advantage on the competition, though the team still has to balance a budget at MBM.

“I feel like it, yeah,” Keselowski said of having an advantage. “Just knowing when a driver says, ‘Hey, this thing is kind of tight but jumps sideways loose,’ And it’s like ‘Ok, is it too tight because you’re too tight, you put a lot of wheel into and it jumps sideways, or is it too tight and jumps sideways because of something else.’ As a driver, I can relate to that and have a good idea on where it needs to go to fix it.”

“He understands what I feel and what I like in the car,” Finchum stated. “It’s even to the point now where when he’s setting the cars up at the shop and we go unload for the first practice, he’ll say, ‘Here’s what we did, and here’s what we need to do, but this is the way I know you like to drive so we’re going to change this and change that.’ I think that is so key.”

Prior to Keselowski coming on board at Chicago last year, Finchum had five crew chief changes in the opening 15 races of the season — one race in which he failed to qualify at Charlotte Motor Speedway. That was “tough” for the then-rookie driver. But since the two have aligned, it’s been a good relationship on and off the track, as the two often talk football or sit down for a game of Madden.

“I think you have to be able to have a relationship with your co-workers away from the racetrack,” Finchum stated. “I think you have to have a personal side with them and enjoy the activities that you’re going to do … It’s having fun, being light-hearted, light-spirited and I think it allows people to speak freely and tell each other their feelings without them getting stepped on or hurt.”

“We talk a lot about at the track just for something to talk about besides just racing all the time,” Keselowski noted. “It gets a little bit boring if all you talk about are race cars every day of the week. It kind of works out, and I think it’s a good relationship too.”

Prior to matching up for Carl Long‘s team in 2018, the two sides didn’t know much about each other. Keselowski originally went to MBM wanting to race again. However, he knew of Finchum because he crew chiefed in the CARS Tour for Stefan Parsons in 2016. At that time, Finchum was competing in that series as well.

“Honestly, if he came up and smacked me in the face, I would have never of known who he was,” Keselowski said of Finchum. “I knew of the name and knew he’d won races in Tennessee and did a lot of stuff that was really good, but I never raced against him, so I didn’t know a whole lot about the guy.”

Prior to Chicago, the two had never met in person — not even at the race shop — as Keselowski was hired by MBM the week of the event.

“As soon as I got into the garage, I walked up to the hauler, put my bag up there, walked out to the car and I went and met him and said, ‘Hey Brian, I’m Chad Finchum. I’m your driver,’” Finchum said. “We kicked it off right there and had a solid relationship.”

Over the past year, Finchum has steadily improved, going from a rookie driver to a sophomore in the Xfinity Series. Currently, he sits 27th in points, six points behind MBM teammate Joey Gase and three points ahead of teammate Timmy Hill.

In 13 starts this year, Finchum has an average finish of 27.6, more than 1.5 positions better than last year. The duo has nine DNFs together, though only two have them have been because of an incident (Bristol Motor Speedway last August, Pocono Raceway earlier this month). The others have been either mechanical or a start-and-park.

Despite their close-knit relationship, there have been some challenges along the way, but a lot of it is out of their control.

“It’s mostly budgetary constraints,” Keselowski said. “Not affording to buy the stuff that you want or need to go faster. It’s not like you can change that. I think we’ve handled that somewhat decently. Sometimes, things jump up and bite you that you wish you didn’t have bite you, but for the most part, we’ve done a pretty good job with it.”

Finchum echoes Keselowski, not believing there has been a real challenge between the driver-to-driver, now driver-to-crew chief relationship. Though he could see a potential clash in driving styles should the team go to a track where both sides think their way is the fastest way to get around, Finchum noted that hasn’t happened yet.

As the season progresses, Finchum’s primary goal is to improve at every racetrack and finish inside the top 30 in the championship standings.

“All of the tracks that we run two times a year, when we run there in the spring, whatever finish it is, when we come back later in the year, I want to beat that,” Finchum said. “I think that’s always the mentality and an uplifting thing to think about. If you can do better when you go back, you’ve made gains and showed improvement.”

Meanwhile, Keselowski’s goal is similar to Finchum’s: improve as a crew chief and help MBM grow, as he’s signed on for the full season. There will be times that he’s pulling double duty between the Cup and Xfinity races as a crew chief, doing so six times already in 2019. He’s crew chiefed seven total Cup races (no Xfinity race at Kansas Speedway in May) for MBM Motorsports.

Overall, it’s been a successful first year, taking baby steps before you can walk.

If Chad had the funds he would be winning races in this series.