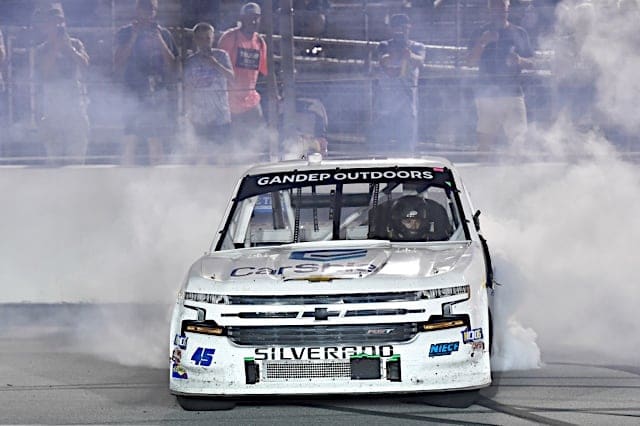 The Gander Outdoors Truck Series will kick off the 2019 playoffs in mid-August at Bristol Motor Speedway with a midweek showdown. However, there’s still a ton of racing left before setting the field of eight drivers who will compete for this year’s championship.

Just four series regulars have victories this season, and one of those (Ross Chastain) is not in the top 20 in points at this time, so there are still plenty of opportunities for someone to steal their spot in the championship battle. The next two events run on the mile-and-a-half ovals of Chicagoland Speedway and Kentucky Speedway. But after that, you’ve got the short, 150-mile Pocono Raceway visit, followed by Eldora Speedway — both of which present unique challenges and could turn into surprise victories for an unexpected driver. Once those four races are complete, that leaves the high-speed Michigan International Speedway as the final race to set this year’s playoff field.

Three races have run since Chastain and Niece Motorsports announced the pairing would attempt to run for the Truck Series championship. Following a 10th-place run at Texas Motor Speedway earlier this month where he finished fourth and seventh in the first two stages (read: more points), it looked like what was going to be perhaps the biggest challenge was complete when he took the checkered flag first at Iowa Speedway. But with a failed post-race inspection and a stripped win later, suddenly Chastain had earned just five points, lost the victory and was credited with a last-place finish, his first outside the top 10 all season.

Instead of letting the Iowa disqualification derail the next race, Chastain went out and won at World Wide Technology Raceway at Gateway last weekend and even joked about the area of the truck that had failed inspection the previous week in victory lane. This time, the win remains and Chastain has the one victory he’ll likely need to make the playoffs, though he currently sits outside the top 20 in the standings.

A less than 40-point deficit stands between Chastain and a playoff spot. Of the 15 drivers between him and 20th-place Josh Reaume, only four are entered in Friday’s race at Chicagoland: Norm Benning, Natalie Decker, Jennifer Jo Cobb and Joe Nemechek. That’s not to say Chastain will enter the top 20 this weekend, but nearly every driver between him and the spot needed to be eligible for the playoffs runs a part-time effort, making it more of a matter of when, not if, he’ll get there.

The bigger question is whether Niece Motorsports can actually be taken seriously as a championship contender. For an organization that hadn’t found victory lane until earlier this year, can the pressure of having a title on the line translate into the on-track success Chastain has found so far this season? Only time will actually be able to answer that question. It’s a cinch past statistics don’t mean a thing this year as Chastain has blown most of those previous numbers out of the water.

With a unique combination of tracks ahead before the playoffs and even going into the championship battle, it’s absolutely possible Niece Motorsports will be in that conversation when it comes to setting the Championship 4 for Homestead-Miami Speedway in November.

For the first time since their tangle at Iowa Speedway, Austin Hill and Johnny Sauter, who was suspended for the series’ latest race at Gateway, will be back on track together. Neither driver seemed to want to give an inch for their role in the situation, either. Both have their versions of what happened, and it’s likely both think they were in the right.

But right or wrong, Sauter was parked for a single race, though he still retained his playoff eligibility and will have the opportunity to run for the championship later this year. Meanwhile, Hill was warned that NASCAR will be watching his actions more closely for his part in the incident as well.

Sauter spent his weekend racing at Dells Raceway Park in the Dick Trickle 99 and finished second to Ty Majeski. As far as whether he and Hill will talk about their contact at Iowa?

“No, I don’t have much to say,” Sauter told Autoweek after his second-place run. “There isn’t anything to talk about. Honestly, I can’t let it become a distraction. This is a championship-winning effort with my [No.] 13 team. Duke and Rhonda (Thorson, team owners) have been gold to me, and I’ve said that 1,000 times.

“I can’t let this be a distraction to my team. My guys deserve better.”

After NASCAR announced Sauter’s one-race suspension, Hill reached out on Twitter inviting Sauter to talk about the incident. In all likelihood, both drivers will use their brains and avoid anything that even remotely brings their behavior into question. In fact, it wouldn’t be all that shocking for NASCAR to pull the two aside when they arrive at the track to force a conversation and to make it clear that contact between the two will not be tolerated.

But we all know what can happen in the heat of the moment on the track when there’s already tension between a pair of drivers.

Much has been said this season about full-time Kyle Busch Motorsports drivers Harrison Burton and Todd Gilliland to the point where even team owner Kyle Busch has been publicly critical of the pair. And I’m sure plenty of that criticism lies in the fact that the No. 51 KBM Toyota, which has been shared by multiple drivers this season, has run so well. After all, that truck alone has six victories, five of which came from Busch and one from Greg Biffle in his return to NASCAR at Texas Motor Speedway.

But consider this for the No. 51 in the rest of the races it’s run this season.

Christian Eckes has piloted the truck twice, once at Daytona International Speedway and again last weekend at Gateway. He started on the pole in the season opener but was swept up in the Big One that happened right after the beginning of stage three. Before that, though, he finished stage one in third. Fast forward to Gateway and Eckes started on the pole once again (rain canceled qualifying) and finished fifth and fourth in the first two stages, respectively. In fact, until a late spin in stage three, Eckes was running inside the top five and likely would have finished right in that vicinity.

Meanwhile, Brandon Jones and Chandler Smith have ran the other three events for the No. 51 Toyota, posting results of 13th, fifth and eighth. The truck has an average finish of sixth so far this season, which is leaps and bounds above Burton’s 11th and Gilliland’s 11.6.

Both of the organization’s full-time drivers certainly have a ton of weight on their shoulders to perform quickly before the playoffs begin, and they did just that at Gateway, though only one has the finish to show for it. Gilliland scored a runner-up finish and Burton likely would have ended up in the top five if not for late-race contact with KBM teammate Smith that put the No. 18 into the wall.

Burton and Gilliland find themselves in a precarious position when it comes to making the playoffs too. Gilliland is currently 31 points below the cutline, and Burton sits last in the top eight and will fall out of there as soon as Chastain moves into the top 20 or a driver outside the top eight wins over the next few weeks.

It’s not like the pair are bad drivers or they likely wouldn’t be racing for KBM in the first place. But when it comes to a team that is entirely capable of putting both full-time trucks inside the playoffs and winning, it’s time to perform and close the deal or move on because there are certainly other drivers in the team’s sights waiting for a place to race.