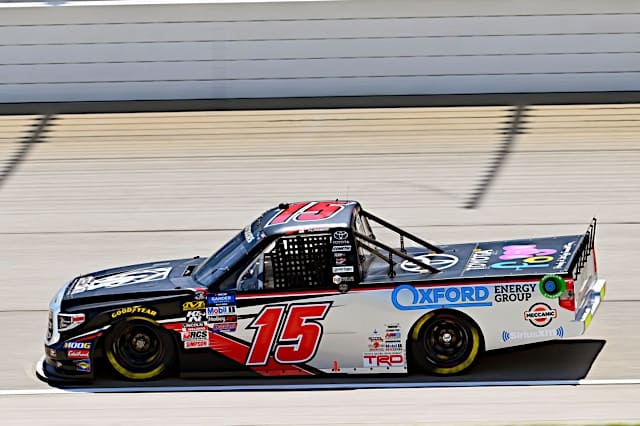 Brandon Jones paced the field in the opening practice session. He drove 20 laps around the 1.5-mile track in Joliet, Ill. Driving the No. 51 Kyle Busch Motorsports Toyota, Jones laid down a fast time of 175.678 mph. He will compete in his third Truck Series race this season.

Kyle Busch Motorsports drivers swept the top three fastest times. Harrison Burton wheeled his No. 18 Toyota to a time of 175.160 mph, and Todd Gilliland was 0.233 seconds behind Jones with a time of 174.357 mph.

Rounding out the top five were Brett Moffitt and Alfredo.

26 of the 32 drivers entered for the Camping World 225 completed a lap in this practice session.

In second practice, Alfredo led the field with a fast time. He completed his lap in 176.269 mph, faster than the fast time set forth by Jones in the first practice.

Moffitt picked up two spots in this session, second on the leaderboard. He wheeled his No. 24 GMS Racing Chevrolet around the track for 20 laps. He was 0.046 seconds slower than Alfredo, but still came in at 176.005 mph.

Alfredo continued to show speed in his No. 15 DGR-Crosley Toyota, leading the third and final practice session. He led final practice with a speed of 176.494 mph, besting his top speed in the second practice.

Johnny Sauter returned to the Truck Series with a fast No. 13 ThorSport Racing Ford. He barely missed fast time by 0.008 seconds, but he still timed in at 176.448 mph.

Austin Hill, who tussled with Sauter at Iowa Speedway, finished the session right behind Sauter in third. Hill completed 35 laps in the final practice, but his first lap was his fastest. He timed in at 176.108 mph.