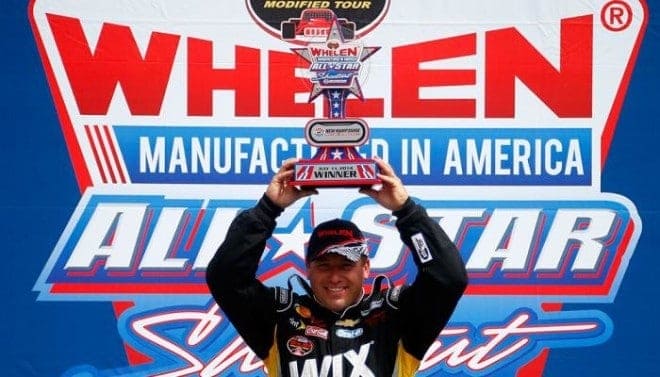 Ryan Newman gets an invite to the Whelen Modified All-Star Shootout and takes the win at New Hampshire Motor Speedway. Credit: Getty Images

The Monster Energy NASCAR Cup Series is about to have myriad changes take place over the next couple of years — or so it’s said.

In 2020, the schedule is rumored to be drastically different, and in 2021 the Gen-7 car is set to hit the track. Reports describe the vehicles as everything from more modern with independent rear suspensions and greater comparisons to the street versions, all the way to possibly having hybrids on the track.

Whatever the case may be, it will be a fantastic time to have a new manufacturer jump into the fray that is NASCAR.

2012 was the last year we had four manufacturers compete for the whole season, and even then there were only two or three Dodges on the track. Looking at the fields today, there are predominantly Chevrolets and Fords on the speedways with a smattering of Toyotas, although the Joe Gibbs Racing Toyotas are the ones to beat most every week right now.

As the prospect of a new manufacturer begins to peek over the horizon, there are a few things that will hopefully happen should a fourth automaker reenter the NASCAR ranks.

For those of us currently looking in from the outside at the Toyota camp, it’s in a bit of a pickle. Everyone sees Christopher Bell consistently running near the front of the Xfinity Series races and most likely contending for a title this year. Even casual observers can see it is time for him to move up, but where will he go? The Gibbs cars are full of competitors who are not ready to retire or move on to another organization.

Leavine Family Racing just came into the fold as a satellite of JGR, albeit not at the same level as Furniture Row Racing was during its partnership. That is the extent of any Toyotas with factory backing, which is what Bell most certainly deserves.

Harrison Burton and Todd Gilliland are most likely going to be looking for Toyota rides in the not too distant future as well. Don’t forget Chandler Smith is also running well in the ARCA Menards Series and will probably be rising up the Toyota ladder rather quickly over the next couple of years, especially given his recent debut in the Gander Outdoors Truck Series.

What this all boils down to is that manufacturers in the sport need to make a commitment to NASCAR to field a significant number of cars. Only running two or three cars is not doing any justice to the brand recognition for the fans, and it also isn’t providing the training grounds for the developmental drivers. If drivers are working through the ranks to get to the big leagues but can clearly see there is no place for them, what motivation does that provide? There needs to be ample seats at the top level to provide rides for a decent group of drivers and to give fans enough contenders for whom to root.

That gets us to the potential of a new manufacturer. There are discussions about Honda and Volkswagen both having some interest in joining the sport. The Richard Petty Motorsports-merging-with-Andretti Autosport talk has gone on for months.

If either or both of these companies join the ranks of the sport, NASCAR should require them to field at least six cars on any given weekend. That is not an undue burden on the companies, and it gives a reasonable amount of input and support into the top level of the sport. With 36 charters in play, there is more than enough room for five manufacturers to field six cars each every race weekend.

In addition to the top level of the sport, new manufacturers should also be required to help the developmental levels of the sport. Field a respectable number of entries in the Truck and Xfinity ranks while also lending support to the regional series — K&N Pro Series, ARCA and Whelen Modifieds, plus the Whelen All-American Weekly Series. The developmental series are not only where the future stars of the sport currently reside, but they are also where the future fans of the sport are getting their first taste of the competition. Many people take their children to local races to find out if they’re interested in going to see auto racing before making the financial commitment to go to a national event. Supporting those series, either through vehicles or just support monies, will go along way toward ensuring the future viability of the sport.

The changes that are going to hit this sport in the next couple of years are going to change it dramatically. The guidance and forethought of the new leadership of the sport will hopefully engage new players to a level we have not seen in some time. If it is done properly, the sport will not only survive but thrive over the coming decade, while also hopefully encouraging a whole generation of fans who do not have a love affair with the automobile to at least become race fans.

Yo think Nascar will and ually require a new manufacturer to do anything like what they made Toyota do? Spend X number of years in trucks and Xfinity before allowing them into Cup. Then force them to support K&N and ARCA? I would be way more concerned that they will lose another manufacturer at this point. Nascar will have to change what they race to attract new manufacturers. Look no farther than Formula E to see where Manufacturers want to spend their money.

They’re taking a LONG time to screw up the Gen-7 disaster. Why don’t they just go back to Gen-0?

Have you seen the JGR tweet about CBell? A pic of him and the words “The next generation! “. That tells me the deal is done. Don’t know what the deal is, but……

I could see a scenario where Honda joins (or doesn’t) but either GM or Ford (or both) pull out. Lets face it, the technology is old, the fan base is thinning, and both Ford and GM are going through transition periods and restructuring for an all electric future. NASCAR is going to have to do a lot of convincing because now that they have eliminated HP from the sport, whats left to separate themselves from one another and market?

Good luck in getting any manufacturer to field a team of 4-5 cars. And as for Toyota, who cares that if they didn’t spend gobs of money throwing it at NASCAR, there probably be 20 cars starting. Toyota owns NASCAR.