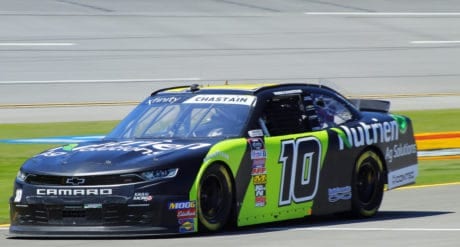 In 2018, Kaulig Racing first upped its organization to two entries in one race. Now, it’s adding a third.

Full-time driver Justin Haley had already been announced for the No. 11, as well as AJ Allmendinger in his team debut, driving the part-time No. 10.

Joining them is occasional Kaulig competitor Ross Chastain, who will pilot the team’s No. 16.

“Being able to bring a third car to Daytona and have our part-time driver Ross Chastain behind the wheel only increases our chances of getting the win,” team owner Matt Kaulig said in a press statement. “Not by the addition of a car, but by the additional teammate our two drivers Justin Haley and AJ Allmendinger will have – Daytona is all about teamwork.”

Chastain has driven multiple races for Kaulig in its No. 10 while also competing for JD Motorsports with Gary Keller in the four-car organization’s No. 4. As of earlier this month, he is no longer a full-time Xfinity driver, having shifted his points declaration to the Gander Outdoors Truck Series.

Daytona will mark Allmendinger’s 2019 series debut, while Haley is 10th in Xfinity points with one top five and 10 top 10s.

Barring an entry list of 38 cars or less, Chastain will have to qualify his way in to the field.

Hopefully they will push A.J. to the win!! He needs a full-time ride!!

CAN Y’ALL DO A NICE ARTICLE ON MORGAN SHEPHERD?? I WAS AT HIS LAST WIN AT ATLANTA AND HE IS A FINE CHRISTIAN MAN WHO SHOWS UP AND QUALIFIES I DONATED TO HIS CHRISTMAS FUND FOR YEARS HELPING THE POOR FAMILIES IN KENTUCKY. . TODAY’S FANS DON’T HAVE AN IDEA ABOUT HIS ROLLER SKATING SKILLS. HE WAS A MAJOR PLAYER BACK WHEN HE HAD FIRST RATE EQUIPMENT.

LOVE YOUR SITE. WE NEEDED YOU AFTER JAYSKI BAILED !!
SAY HELLO TO DREW PATEY FOR ME !!!