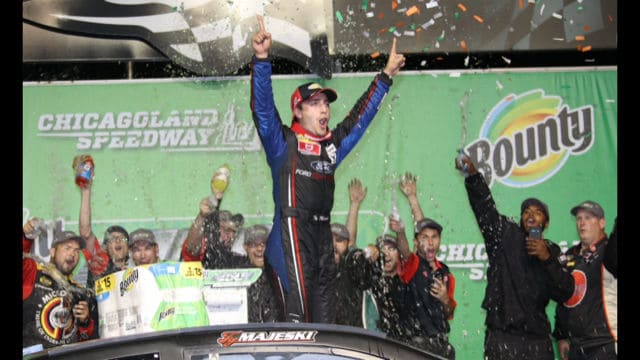 When Ty Majeski was in the lead in the final laps of the Bounty 150, someone on his radio referred to his performance as a clinic. Majeski certainly put one on Thursday night, winning the Bounty 150 at Chicagoland Speedway by a margin of nearly 10 seconds. Majeski has now won three ARCA Menards Series races this season.

The ARCA Menards Series race in Joliet, IL, was initially delayed by inclement weather. Once the green flag flew, a few cautions quickly occurred. Within the first 10 laps of the Bounty 150, two caution flag periods occurred. Then on lap 17, Eric Caudell spun, bringing out the third caution flag of the race.

Following the lap 32 caution flag period, Majeski took the lead from pole-sitter Michael Self. On lap 52, Tanner Gray blew a right front tire and couldn’t save his No. 54 DGR-Crosley Toyota from smacking the wall in Turn 3. As a result of the damage, Gray was done for the night.

Venturini Motorsports teammates Christian Eckes and Harrison Burton combined to lead the Bounty 150 up to lap 69. Eckes brought out the caution flag on lap 65. He also spun due to a flat left rear tire. On the restart, Majeski took the lead, yet he faced a conundrum.

Joe Graf Jr. spun on the backstretch. Although Majeski enjoyed a superb Bounty 150, his teammate Graf Jr. struggled throughout the whole day. He detected an issue in his No. 77 Ford during practice, and the team ultimately decided to go to a backup car. Graf Jr. came down pit road many times, yet his Chad Bryant Racing team never gave up.

When pit road opened during the caution flag period brought on by Graf Jr., Majeski stayed out. Most of the lead lap cars pitted, though. Majeski lined up on the outside line, determined to keep the No. 20 Toyota of Burton stuck behind Eckes, who also didn’t pit.

On the restart, Eckes took the lead for a lap, but Majeski charged back to the front. He took the lead on lap 82 and extended it to a 9.179 seconds margin when the checkered flag flew.

“A freakin’ hot rod” is how Majeski described his No. 22 Ford as he celebrated over the radio upon winning the Bounty 150. He dominated the ARCA Menards Series field, arguably his most impressive feat this season.

In his post-race interview in the media center, Majeski admitted he has dominated in many late model races. He is a four-time ARCA Midwest Tour champion. What he was proud of was the performance of his No. 22 Ford.

“This was my best race in this level,” Majeski remarked. “Chad Bryant has some of the best stuff in the garage.”

Finishing second in the Bounty 150 was Burton. He will pull double duty this race weekend at Chicagoland Speedway, also driving the No. 18 Kyle Busch Motorsports Toyota in the NASCAR Gander Outdoors Truck Series race on Friday, June 28.

Bret Holmes finished in third place. Even though he finished better than the other championship contenders, he commented that “Self is earning more bonus points than us.” Nevertheless, Holmes continued his consistent season.

Self had a slow pit stop in the Bounty 150, but recovered to finish in fourth place. He remains the unofficial ARCA Menards Series points leader by 30 points over Holmes.

Rounding out the top 5 was Travis Braden. He leaves Chicagoland Speedway unofficially third in the point standings, 55 points behind Self.

Too bad Majewski can’t drive a xfin car to save his life.

Every time I see or hear his name I think of the Charles Bronson movie.

Some of these starters were 30-40 MPH slower than the front runners. That is too dangerous for a high speed race. ARCA future don’t look good.