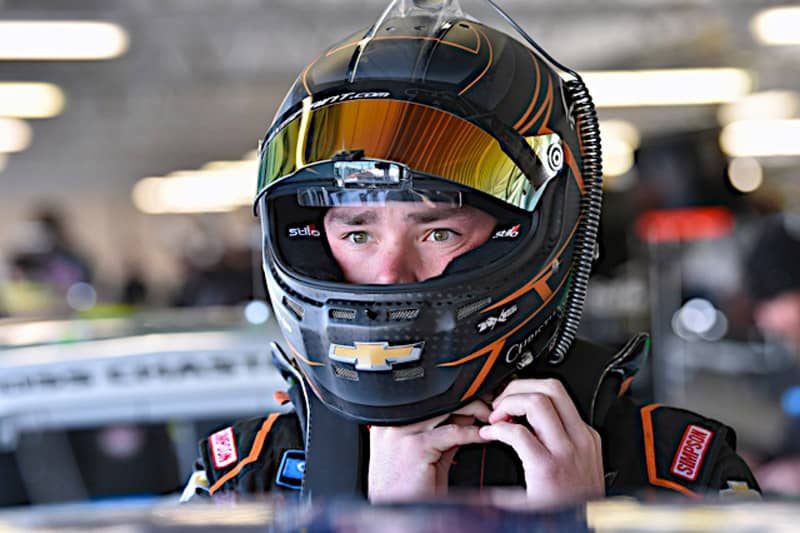 Brett Moffitt won his first NASCAR Gander Outdoors Truck Series race of 2019 without leading a single lap. He made sure his second win was a bit more emphatic this time around in the Camping World 225.

Friday night (June 28) at Chicagoland Speedway, Moffitt took control with an unsponsored No. 24 GMS Racing Chevrolet. Winning the race off pit road during stops after the second stage break, Moffitt proved untouchable over the race’s final 75 laps. He only lost the lead during a final cycle of green-flag pit stops, pulling away from his competition with ease.

The No. 24 team’s strength on pit road also shined through. Moffitt’s lead over eventual runner-up Brandon Jones grew by more than two seconds after those final stops. The defending GOTS champ and the 2018 Truck Series race winner at Chicagoland wound up in victory lane with nothing but white paint on the quarterpanels, a sponsorless organization getting its act together after an up-and-down start to 2019.

“It’s frustrating to go from a small, one-car team to the megateam in the Truck Series and we didn’t have the results early,” Moffitt said in victory lane. “But it’s getting a hell of a lot better now.”

For Moffitt and his crew, the win will go down as their second victory in 2019, but the first that saw the team cross the finish line ahead of everyone else. Moffitt was declared the race winner at Iowa Speedway two weeks ago after Ross Chastain was disqualified for a post-race inspection failure. With Friday’s victory, Moffitt and Chastain each lead Truck Series regulars with two wins apiece.

Though Moffitt was strong for much of the evening, Jones and Grant Enfinger were the story of the first two stages Friday night. Enfinger would take the lead from pole sitter Austin Hill on lap 13 and held the point until the final lap of stage one. That’s where a surging Jones (who made it from 19th to the front in the opening 35 laps) used a last-lap pass to steal a first stage victory.

It was more of the same in stage two. This time, Enfinger was able to hold off Jones’ last-lap charge on lap 70 to rack up a win himself.

Enfinger’s strong night was derailed, however, as soon as the final stage started. Caught in the middle of a four-wide pack entering turn 1 on lap 79, Enfinger would fall to the back of the top 10 catching his truck. But he was then pushed into the turn 4 wall when Spencer Davis got loose underneath him, triggering a lap 80 wreck that also collected Austin Wayne Self.

Here's what has the #CampingWorld225 under the fifth caution of the night at @ChicagolndSpdwy. pic.twitter.com/R4YBeqBRTZ

#NASCAR … Grant Enfinger not happy with Austin Hill on pit road after the race pic.twitter.com/bq9P203ZXp

Stewart Friesen wound up third in the final rundown while Harrison Burton and Hill rounded out the top-five finishers.

KRISTL: BURTON ‘WORKS HIS BUTT OFF’ FOR 4TH-PLACE FINISH

There were plenty of additional storylines to be found inside the top 10. The battle for the final playoff spot grew much tighter after 225 miles at Chicagoland; Burton scored a strong fourth-place finish while Ben Rhodes bowed out of the race on lap 1. It was an apparent engine issue that saw his No. 99 Ford billowing smoke in turn 1 immediately after taking the green flag. Friday’s DNF marked a career-worst finish for Rhodes, closing what will be the battle for eighth in points to only 13 markers.

Also of note in the points race was Chastain, who enjoyed a seventh-place finish on the heels of his victory at Gateway last week. He has unofficially closed the gap to 20th position in the standings to only 10 points, making a postseason bid all but certain. Chastain must be ranked inside the top 20 in points to be eligible for the playoffs on the strength of last week’s win at Gateway.

Near the back of the top 10, the DGR-Crosley operation enjoyed what may have been its strongest top-to-bottom performance of the season. Anthony Alfredo led the way with a ninth-place finish, his second top 10 of the year. Dylan Lupton, a former Xfinity Series regular making his debut for the team, finished in 10th. That’s his first career top 10 in a truck and his first top 10 in NASCAR’s top three series since the 2015 Xfinity Series race at Mid-Ohio.

Tyler Ankrum finished a solid 13th for DGR-Crosley that was in no way indicative of how he ran; the No. 17 truck was a fixture near the top five all race long before incurring a pit road speeding penalty under green inside of 35 laps to go. Even Natalie Decker rebounded to finish 14th after a lap 44 spin when she appeared to come down across the nose of Todd Gilliland.

Of note at the back of the field, Norm Benning and his No. 6 crew was called to the NASCAR hauler early in the race after failing to obey the black flag for not meeting minimum speed under green during the first stage.

But this race was all about Moffitt. Speaking to him as recently as Kansas Speedway last month, the defending Gander Outdoors Truck Series champion couldn’t help but feel frustrated. Both he and his new team at GMS Racing just hadn’t put together a complete race yet.

Now, he’s got an on-track victory for GMS to hang their hat on with the postseason looming ever closer.