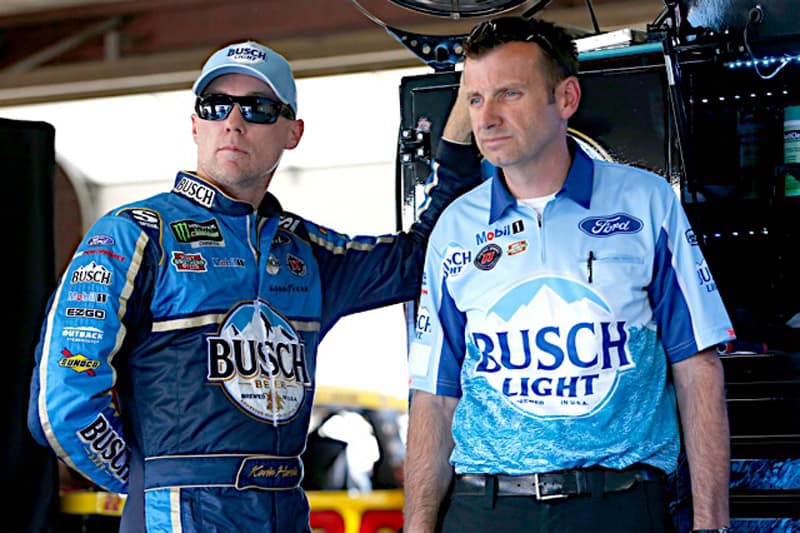 After a fairly uneventful day on a road course, Monster Energy NASCAR Cup Series drivers get back to their normal routine at Chicagoland Speedway Sunday (June 30). Yes, that means the lower horsepower/aero duct package is back to pair with your latest daily fantasy DraftKings roster.

Also, cars will be impounded after qualifying Saturday before getting inspected Sunday. Anyone who fails tech the first time will have their qualifying time disallowed, which could potentially give you good value in your lineup. Check practice results Saturday and the final starting lineup Sunday before making necessary adjustments to your roster.

There are quite a bit more laps in this race than there were last week (267 vs. 90) so you will want drivers who can lead. Bonus points for fastest laps and positive place differential are also important. As always, the winner of the race could also give you a big boost to your DraftKings score.

Now, here are this week’s selections!

Here it is, nearly July and the Freaky Fast Stewart-Haas No. 4 Ford team is still searching for their first win of the season. Is Chicagoland the week? Perhaps, but either way, for daily fantasy purposes, he could be a good fit in your roster. Harvick has the second-highest average DraftKings points among the 1.5-mile tracks this year at 64.5. Since Chicago is another intermediate, it stands to reason that he would again earn a lot of fantasy points. However, he’s the second-most expensive driver, so know you would need some key value racers in your lineup.

Not only has Harvick done well at this length of track, but he’s also run well at Chicagoland in the past. His only wins here were in his first two Cup starts at this track, in 2001 and 2002, but he’s finished in the top 10 in four of the last six races here. Granted, they only come to Chicagoland once a year, but Harvick’s been around the sport long enough to know his way around this course. If he does well in practice but somehow starts near the rear, I will definitely have him in my roster.

Elliott has been the only driver to have a victory apart from Team Penske and Joe Gibbs Racing this year. Even though that win came at Talladega, his Hendrick Motorsports team has shown flashes of speed. In fact, his average DraftKings points at Las Vegas, Texas, Kansas and Charlotte combined is 62.75. That’s an incredible score for under $10,000.

Though he’s only run three races at Chicagoland, Elliott finished third and second his first two times at the track. He also led 117 total laps in those first two events. If he does so again in this race, it would be a bigger score for your DraftKings lineup. In addition, Elliott can get some good place differential points, especially if he doesn’t qualify as well.

Elliott’s teammate almost won at Kansas, a 1.5-miler, earlier this season. He ended up giving DraftKings users 79.3 points with his second-place finish back in May. The driver of the No. 88 Nationwide Chevrolet has been surging up the standings as of late.

One good thing for fantasy purposes is Bowman hasn’t started in the top 10 during the past four races this year. However, he’s only capitalized on that in two events, but one of those was at Charlotte. He scored 49.5 DraftKings points after finishing seventh in that race.

While Bowman doesn’t have a solid track record here, he does have two Chicagoland top 10s. Both of those also came within the past two races he ran (2016 and 2018).

If Bowman follows the trend that he’s set so far this season at 1.5-mile tracks, he would be an excellent value for your DraftKings lineup. Practice results and starting position will be helpful to know for sure whether he is viable or not.

Newman’s lone win at Chicagoland came way back in 2003. However, he does have a top-five finish as recently as 2015. I have him here more for the potential value that he’s shown throughout the 2019 season driving the No. 6 Ford.

It was a rough start since joining Roush Fenway Racing but Newman is on a two-race top 10 streak. That’s very respectable for the program. Additionally, in nine of the past 10 events so far, he’s scored at least 30 DraftKings points. While Newman hasn’t done as well at the 1.5-mile tracks, he could carry momentum from the last two weeks to change that.

It was a disappointing end to a strong run at Sonoma last week, but Suarez looks to bounce back. Still, the Stewart-Haas Racing driver is somewhat risky, since he’s started in the top 10 in each of the past four races. He only finished higher than where he began in two of those events.

But one thing I do like about Suarez is that he tends to do well at 1.5-mile circuits, averaging 40.75 DraftKings points across those four races this year. Also, he finished just outside the top 10 at Chicagoland in his two starts.

Hopefully, Suarez can keep up that trend and deliver a top-tier performance.

For the second week in a row, Buescher is my Honorable Mention. He wasn’t as good last week out in the road course at Sonoma, struggling most of the day, which makes him very inexpensive. Though he did finish ahead of where he started at last year’s race at Chicagoland, I have him here because of his performance at similar tracks. He scored an average of 40.25 DraftKings points across the four races. Also, before last week, he was on a four-race, 40-plus fantasy points streak. Buescher has performed exceptionally well for JTG-Daugherty Racing so far this year and looks to keep it up this week.

While Tifft hasn’t exactly been the best Dark Horse Performer, his price is still very cheap, which could give you good value and enough money to snag a top-tier driver. His average DraftKings points at similar tracks is 23.75, which is just about the value for his price tag. Though he hasn’t started at Chicagoland in the Cup Series, he did begin each Xfinity race seventh and finished sixth and 16th, respectively.

Hopefully, the Front Row Motorsports rookie can provide the value you need for your fantasy lineup.