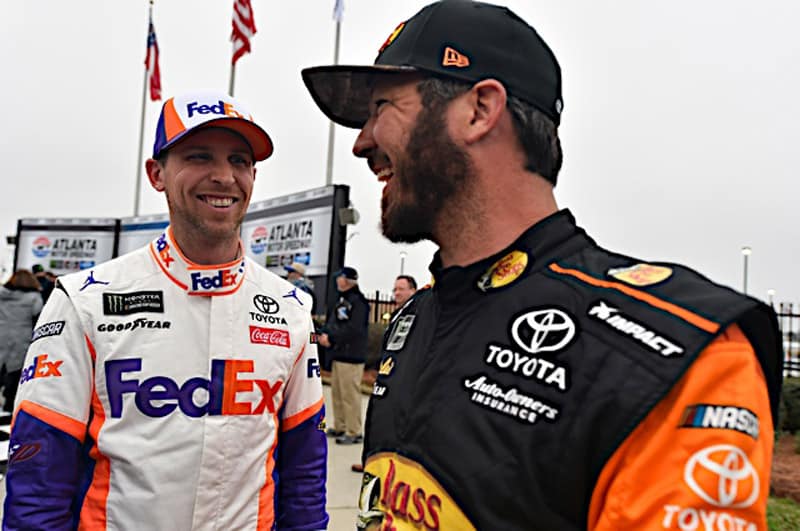 The Monster Energy NASCAR Cup Series returns to a more traditional track this weekend as the series will race on 1.5-mile Chicagoland Speedway. It is important when filling out your daily fantasy NASCAR FanDuel roster to make note of who has been fast on these types of cookie-cutter tracks this year. They’re still the bread-and-butter of the NASCAR schedule, this size of track nearly making up half of the 36 races.

Last year, Chicagoland provided one of the most nail-biting finishes of the season, as Kyle Busch dumped Kyle Larson for the win in the final corner. This year’s race could also come down to the end before there’s a clear-cut favorite, as no driver has dominated the track in recent years.

Sunday (June 30) marks the Cup Series’ lone race at the Joliet, Ill., facility this season. One race makes it less data to pull to see who is trending for a good finish in daily fantasy NASCAR this week. You’re going to need all the tips you can get with this lineup.

Also, with only 0.1 points awarded for each lap led by a driver, the need for a dominator is less important when building a winning lineup. The 267-lap race will only have a total of 26.7 points up for grabs in this category. Take note when building your roster and focus on mid-pack competitors who can climb up toward the front on race day.

Truex has been too good this year and too good in recent years at Chicagoland to pass up. He’s won four of the past eight races in 2019 and the chemistry he’s building with his new team, Joe Gibbs Racing, is only going to continue to grow. Truex won last week at Sonoma Raceway and he won the most recent mile-and-a-half race at Charlotte Motor Speedway back in May.

As for Chicagoland, Truex won there in 2016 and 2017. Last year, he came from 36th to finish fourth. Truex is a must have in your lineup this week, no questions asked.

Keselowski’s most recent Chicagoland win came in 2014, but he’s still been solid in every recent appearance. Keselowski finished outside the top 10 in his first two Chicagoland outings, but hasn’t run worse than ninth since then — a streak of eight straight top 10s at the track. He’s led laps in six of the last seven Chicagoland races and has the third best average finish among active drivers. That number moves to the top of the charts if you factor out his lone start in a part-time Hendrick Motorsports entry in 2009.

As for this year, Keselowski has won three races, with two of those coming on 1.5-mile ovals. Look for him to challenge for the win once again this week.

Joe Gibbs Racing has been the best team in the Cup garage all year, so it only makes sense to put a few of its drivers in your lineup. Hamlin is coming off a top five at Sonoma last week and he’s won two races so far this year, including one at the mile-and-a-half Texas Motor Speedway.

Hamlin struggled at Chicagoland early in his career but he’s found a knack for it recently. He has five straight top 10s at the track, including a win in 2015 from the 29th starting position. In fact, in the last five Chicagoland races, Hamlin has the best average finish among active drivers (4.8). Hamlin is a solid choice to get a top five this week and could potentially contend for the win.

There’s drivers with better track records at Chicagoland than Almirola, but he has a better upside than many of them. The first six Chicagoland starts for him came in Richard Petty Motorsports’ underfunded equipment, where he scored a top 10 and two other top 20s. In the 2014 playoff race at Chicagoland, Almirola ran inside the top 10 for the entire race before a blown engine took him out with 37 laps to go.

Last year, Almirola made his first start at the track in top equipment. He led 70 laps and won a stage before falling to a 25th-place-result due to circumstances outside his control. Almirola has been consistent all year and it won’t be long before Stewart-Haas Racing catches back up to JGR’s and Team Penske’s speed. He could score a really good finish this week.

Byron’s only start at Chicagoland wasn’t that impressive. But he’s been so fast of late that the price makes him a nice add-on to your lineup. The Cup Series sophomore looked like he had a car that could compete for the win in two of the past three races. However, a differing pit strategy set him up to sacrifice track position for stage points.

Byron has led laps in six consecutive races and he won the first stage last week in Sonoma. It won’t be long before these fast runs start turning into top fives and maybe even wins for the 21-year-old.