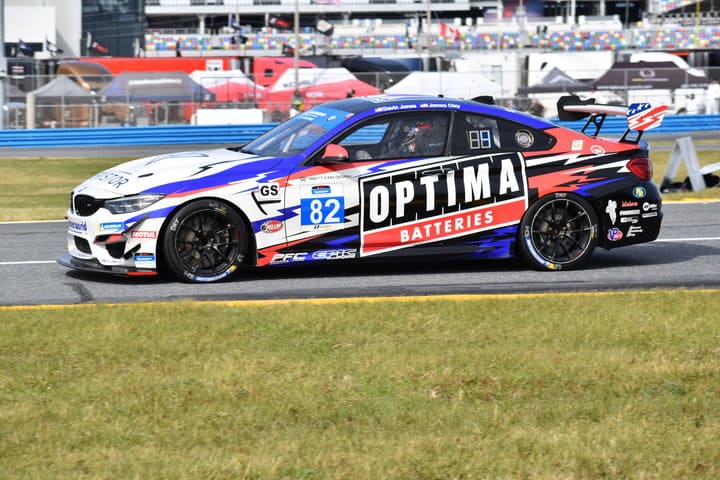 IMSA Michelin Pilot Challenge teams have been treated to warm weather at Watkins Glen International so far this weekend.  BimmerWorld Racing’s Devin Jones is fastest overall in practice this weekend with a lap at 106.514 mph.  He also did all the practice for the No. 82 BMW M4 GT4 on Thursday due to the fact that his teammate/car owner James Clay is splitting time this weekend between Watkins Glen and Pikes Peak.

Michelin Pilot Challenge teams had one practice session on Thursday afternoon in the heat of the day.  Here, the new-for-2019 Michelin tires came into their own.  Jones’ quick lap of the day was set with just a couple of minutes remaining in the session.  It was 1.5 seconds faster than the pole for last year’s race.

Jones’ lap was one-sixth of a second faster than the Mercedes of Winward Racing/HTP Motorsport’s Indy Dontje.  Teammate Christian Hohenadel was third in the No. 57 Mercedes, followed by Riley Motorsports’ Dylan Murry.  Corey Fergus was fifth fastest in his McLaren for Motorsports In Action.

Turner Motorsport’s Robby Foley was sixth quickest in his BMW, then Kyle Marcelli in the fastest of the KohR Motorsports Ford Mustang GT4s.  Murillo Racing’s Eric Foss was eighth, while CarBahn Motorsports’ Jeff Westphal and Rebel Rock Racing’s Robin Liddell in the sole Chevrolet in the field rounded out the top 10.

In TCR, JDC-Miller MotorSports’ Stephen Simpson was fastest in his Audi RS3 LMS with a lap at 104.026 mph, good enough for 23rd overall.  That lap was a quarter of a second faster than the similar Audi of Fast MD Racing’s James Vance.  Mark Wilkins was third in the No. 98 Hyundai for Bryan Herta Autosport, while Colin Mullan was fourth in the No. 52 LA Honda World Racing Honda Civic Type-R TCR.  Alex Popow was fifth in his Alfa Romeo.

Friday morning saw Michelin Pilot Challenge teams up bright and early for a 45-minute session starting at 8 a.m.  Despite the early hour, speeds were actually down.  TeamTGM’s Owen Trinkler was fastest overall in his Mercedes with a lap at 106.384 mph.

Trinkler’s lap was nearly a quarter of a second faster than Westphal and more than four-tenths faster than Fergus.  Compass Racing’s Kuno Wittmer was fourth in his McLaren, while Marcelli was fifth.

Clay, back from Colorado, was sixth fastest in the morning session, followed by Bill Auberlen in the Turner BMW.  Guy Cosmo in the second TeamTGM Mercedes was eighth, then the BMW of Stephen Cameron Racing’s Greg Liefooghe and PF Racing’s Jade Buford.

In TCR, it was again JDC-Miller MotorSports’ No. 54 Audi that was fastest in class.  This time, Mikey Taylor turned in a lap at 104.485 mph to time in 20th overall.  That lap was a quarter of a second faster than Mat Pombo in the No. 73 Civic.  Honda of America Racing Team (HART)’s Ryan Eversley was third quickest, while Michael Lewis was fourth in his Hyundai.  Todd Lamb was fifth quickest in the Atlanta Speedwerks Honda.

Michelin Pilot Challenge teams will qualify Friday afternoon at 1:05 p.m.  That will be immediately preceded by a 15-minute third practice session for warm-up purposes.