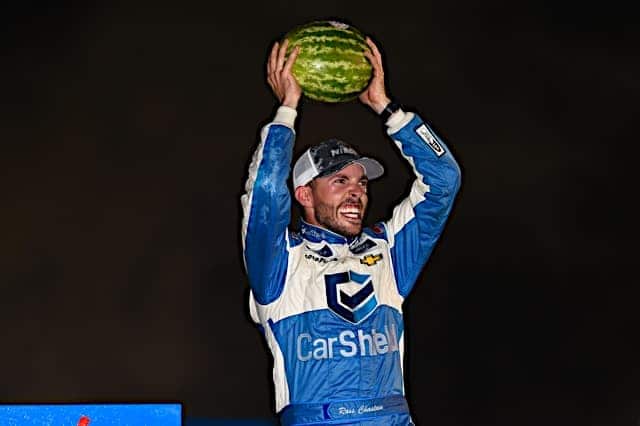 Call him Ross the Boss Watermelon Man Chastain, because this dude deserves to be called two different nicknames.

He’s that good, this story is that cool and the fact that this watermelon farmer keeps on trucking (pun intended) needs to be appreciated.

A borderline journeyman who’s paid his dues and then some, Ross Chastain‘s win and subsequent disqualification a couple weeks ago at Iowa Speedway would only happen to him.

A guy who has run mid-pack/in the rear/started-and-parked for the majority of his career finally started to get noticed as one of those drivers who are doing a lot with a little. And boy, was he.

You know those cliches of drivers who finish top 20 and treat it like a victory? I used to never understand that (youthful exuberance, I guess). But seeing teams like Go FAS Racing, Premium Motorsports, JD Motorsports with Gary Keller and the like slowly and methodically work their way up from tier to tier is a fascinating subplot within each and every race.

You can group Niece Motorsports in there. Er … could.

Yeah, after his Iowa DQ, he came back and won again at Worldwide Technology Raceway at Gateway. This time, the car passed inspection. All Chastain’s gotta do is get his truck inside the top 20 of the standings (which, barring an unforeseen disaster, will happen easily) and he’s in the postseason.

The same guy who raced in the first 37 NASCAR national series races to begin the season (in a row!) before switching his points declaration from the Xfinity Series to the Gander Outdoors Truck Series, starting at zero and quite literally slaying, as the kids say.

I find myself continually saying to myself: “Damn, Ross is really doing it to ’em, huh?”

After losing his Xfinity full-time ride thanks to DC Solar’s IRS trouble, it seemed like Chastain was back to square one — running with Johnny Davis in the red No. 4, middling around 15th and qualifying for the playoffs by virtue of the final spot.

But he wanted more. So instead of sitting back and waiting for it, he went out and got it — and is still getting it.

A few weeks back, I wrote about Kurt Busch’s plans beyond 2018 and if they include returning to the No. 1 Chevrolet at Chip Ganassi Racing next season. If they don’t, and that seat is vacant, who’d be more deserving to fill that seat than Chastain?

However, everybody and their mother in this sport knows the word deserving don’t mean squat. Money wins. It hasn’t always, but nowadays it always will.

Chip Ganassi hasn’t been shy of wanting, liking and signing winners to drive for his iconic organization. Kyle Larson and Kurt Busch are the most recent examples. And it wasn’t even until after Chastain won in Ganassi’s No. 42 Xfinity car last season until the two met and chatted for the first time.

Chastain is a winner, through and through. He personifies the word.

If Ganassi is smart, he’ll keep Chastain in his camp. Victory lane might become a mess, but he won’t regret it.