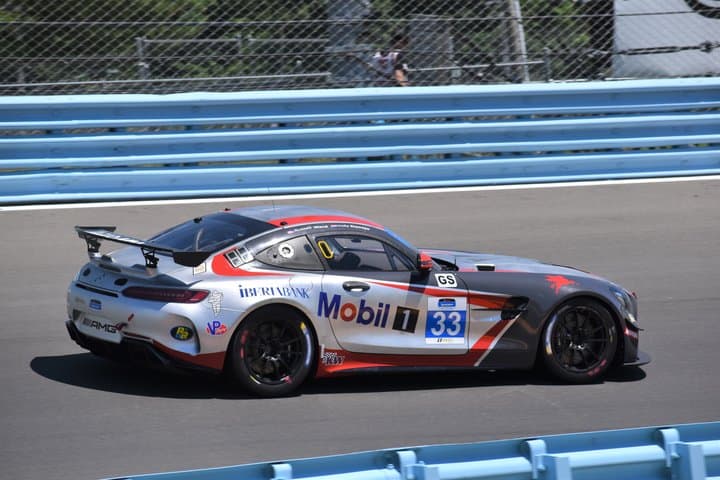 Winward Racing/HTP Motorsport’s Indy Dontje won the pole Friday afternoon (June 28) for Saturday’s Tioga Downs 240 at the Glen with a lap at 106.705 mph, the fourth round of the IMSA Michelin Pilot Challenge season.  It is Dontje’s first career pole in the series.

“The Mercedes-AMG GT4 is running very well here [this weekend],” Dontje told Frontstretch.  “The high speed corners suit our Mercedes very well.  The [Inner Loop], the Carousel and going into the Boot, they all work to our advantage.”

The quotes above are from a sit-down interview that we conducted with Dontje shortly after the session.  Look for that at Frontstretch in the near future.

TeamTGM’s Owen Trinkler qualified his Mercedes sixth, followed by the similar cars of Jeff Mosing and James Cox.  Jesse Lazare was ninth in the Motorsports In Action McLaren, while Nate Stacy was 10th, best of the Ford Mustang GT4s.

The TCR session got off to an unusual start.  On the very first lap on the clock, LA Honda World Racing’s Shelby Blackstock went off-course at turn 1 and nosed into the tire barrier to draw a red flag.  Blackstock exited his car under his own power.

In addition, a number of teams drew penalties for lining up at the end of the pit lane during the red flag instead of returning to their pit boxes.

As a result, teams were only able to get a couple of good laps at speed once the red flag was lifted.  Bryan Herta Autosport’s Michael Lewis ended up on the class pole with a lap at 104.716 mph.

Michael Lewis’ lap, which was good enough for 15th overall, was a half a second faster than Michael Johnson in the JDC-Miller MotorSports Audi.  He was assessed a drive-through penalty for leaving his pit box too early during the red flag, which eliminated a final chance to beat Lewis.

Four teams failed to set times during the session.  Blackstock didn’t get a time due to his aforementioned incident.  KMW Motorsports with TMR Engineering’s Alex Popow had an incident right at the end of the pre-qualifying warm-up.  In addition, Rebel Rock Racing’s Robin Liddell and Bryan Herta Autosport’s Harry Gottsacker did not set times.

The Tioga Downs 240 at the Glen is scheduled to go green at 1:55 p.m. Saturday.  It will be streamed live at IMSA.com and FansChoice.tv.