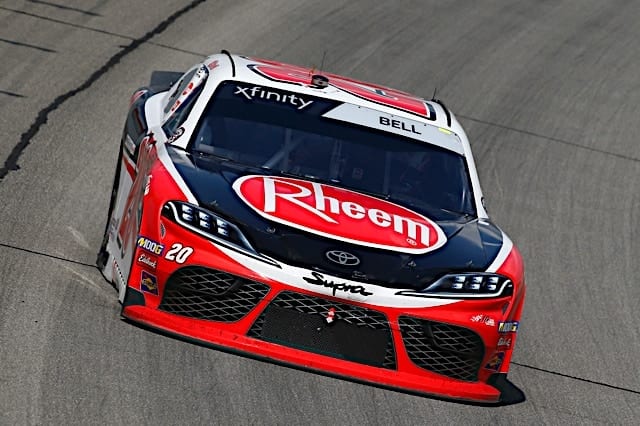 Following the Camping World 300 at Chicagoland Speedway, the No. 20 Joe Gibbs Racing Toyota driven by Christopher Bell failed post-race inspection in the NASCAR Xfinity Series. As a result, Bell has been disqualified from his third-place finish. He will be credited with a last-place finish. Bell also lost the 17 stage points he earned in the Camping World 300. No further penalties will be issued.

After NASCAR made its decision, NASCAR Xfinity Series managing director Wayne Auton spoke to the media about what transpired. He explained that after every race, the top five finishers plus a random car are taken back to tech inspection. In order to be fair to the teams, NASCAR has them take off the shocks so the car is comparable to pre-race inspection.

Unfortunately, when Bell’s team took out the shocks, “the front was extremely low and the right rear was a little high.” NASCAR allowed the team to fill the car up with fuel. When the No. 2o was full of fuel, crew chief Jason Ratcliff said they were ready to be inspected.

The No. 2o Toyota still failed post-race inspection. NASCAR checked to see if there was damage which led to the issue. The car was not damaged, with only a “little rub on one of the quarter-panels.

“The splitter was just fine,” Auton continued. “When we put the [height] sticks on it, the car was low in the front by a lot and the right rear was high by a little bit.”

Joe Gibbs Racing has until Monday, July 1 at 12 p.m. ET. to appeal the ruling. No word as to whether the team will appeal the penalty.

“I think he was as surprised as we were,” Auton remarked. “I can’t say enough about Joe Gibbs Racing and their Xfinity Series program. Christopher Bell, what a driver he is. Jason Ratcliff is one of the best crew chiefs in the garage … but things happen and we feel 100% confident we did our job the way we do every car. We checked every car the same way.”

All other cars passed post-race inspection, although winning driver Cole Custer had one loose lug nut. He retains his Camping World 300 victory. One loose lug nut results in a monetary fine, which NASCAR likely will hand down either this upcoming Tuesday or Wednesday.

According to Auton, since NASCAR implemented this post-race inspection process this season, “This was the first one we’ve even seen come close.” Auton expects Ratcliff and Joe Gibbs Racing to investigate what happened. As for whether there were illegal parts on the No. 20 Toyota, Auton didn’t know. NASCAR doesn’t check for illegal parts. They only check to see if the cars pass the post-race inspection process.

With this turn of events, Bell went from 51 points earned in the Camping World 300 to 1. He most likely will fall from second to third place in the point standings. He still has four wins this season, and Auton confirmed there would be no additional penalties for this post-race inspection failure.

This is the second disqualification in NASCAR this season under this current inspection format. Ross Chastain was disqualified from his victory at Iowa Speedway a couple of weeks ago in the NASCAR Gander Outdoors Truck Series. His No. 44 Niece Motorsports Chevrolet also failed the height requirements.

I wish someone would explain this to low bs to me. They race with the splitter bumping the track so why is being low sitting still so important? I can sort of understand to high in the rear. Although that would seem to slow the car down. I just don’t get it.