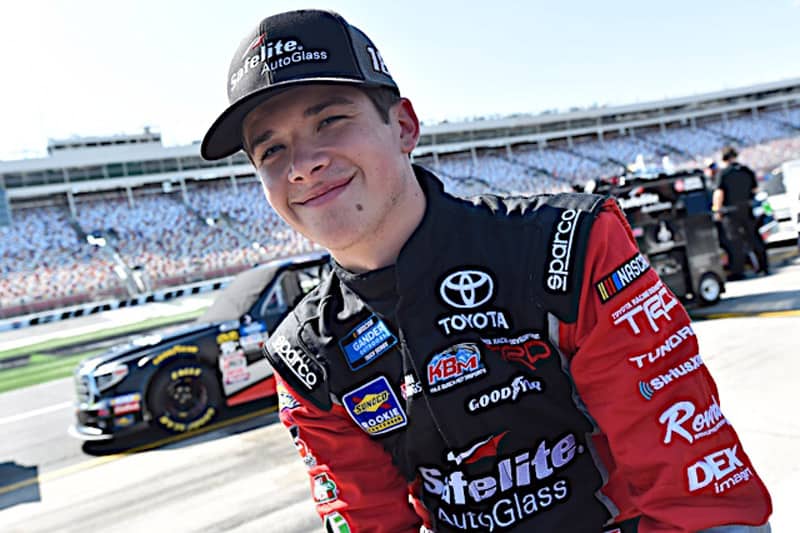 Entering the Camping World 225 at Chicagoland Speedway for NASCAR’s Gander Outdoors Truck Series, Harrison Burton knew the pressure was on to win. With Ross Chastain‘s victory last Saturday (June 22) at World Wide Technology Raceway, the playoff cut line was set to move in the wrong direction for Burton and his Kyle Busch Motorsports team. Add in critical comments from owner Kyle Busch over the past month and the 18-year-old was in need of a quality performance.

Friday’s (June 28) Camping World 225 at Chicagoland Speedway didn’t deliver a trip to victory lane. But it was a step in the right direction for a teenager still finding his footing in the Truck Series. Burton finished fourth in the race, his third top-five finish in the last four races after coming home sixth or better in both stages.

“We had to fight really, really hard,” Burton said of his fourth-place effort. “For the circumstances, we come to the racetrack to win, so when you don’t, it’s always disappointing. But nevertheless a good points day and a good top-five run.”

11 stage points allowed Burton to tie for the second-most points accrued during race. It was a performance that allowed him to gap teammate Todd Gilliland by 45 in the standings for what is, for now, the final playoff spot. Burton also moved to within 13 of fellow postseason contender Ben Rhodes, who suffered an engine issue that left him dead last. The duo will likely be battling for that final playoff position once race winner Chastain enters the top 20 in points.

“We just got to keep gaining, keep chipping away. We got a break tonight,” Burton said. “He’s (Ben) a tough guy to beat so we got to go out and have finishes like this. We got to be perfect coming down the line. It’s really, really hard to make these playoffs. There’s only eight positions and there’s a lot of competitive trucks. Everyone’s kind of battling for a spot. Just clawing and digging, so we just got to keep doing that. Keep being aggressive and show up to bring our friends with us and take the spot from ’em.”

Needless to say, Burton’s performance has definitely improved since teammate Greg Biffle reached victory lane at Texas Motor Speedway for KBM earlier this month. Yet Busch’s criticism about the state of his Truck Series team hasn’t been the source for Burton’s recent good races.

“I don’t think it was his comments in particular,” Burton explained. “I just think it was just the whole team coming together and working hard. We all knew, before he said that, we needed to run better. We need to contend for wins. There’s no magic formula to it. If everyone knew that [formula] then everyone would win the race, right? [Grins] You just got to show up and work your butt off and try to find an advantage.

“[Tonight was] another 1.5-mile where I’m learning to be aggressive and battle is the biggest thing. The more confident you get, the more you’re able to do that.”

After four races in June, the Truck Series gives its drivers a breather; there are only two races in July. Yet because Burton could drop below the playoff cut line with four races remaining in the regular season, his outlook for those races definitely adds pressure.

“Win,” he said of his goals down the stretch. “If we win, it becomes a lot easier not to have to worry about points. We’ll be locked in and it doesn’t matter. That’s the main goal.

“I just need to get out front and lead some more laps to get some stage wins to prepare ourselves for the playoffs.”