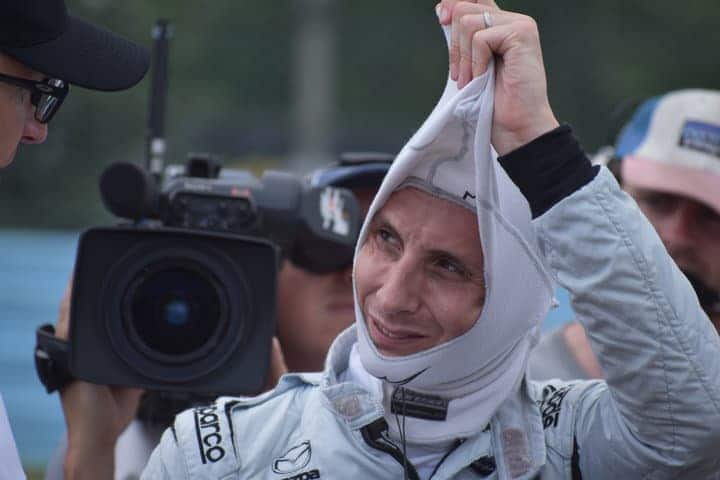 Mazda Team Joest’s Mazda RT24-P showed Saturday (June 29) that it is still the fastest car on high speed circuits. Oliver Jarvis won the pole for Sunday’s Sahlen’s Six Hours at the Glen with a track record lap at 136.548 mph.

“I love this place,” Jarvis said after qualifying. “This place is just amazing. You can just push.  There is so much grip. That was fun. To be honest, I struggled a little all weekend. I didn’t have the balance I wanted. It [was] a close fight. It was Dane [Cameron] again. He was giving me some pressure, [but I overcame it]. It’s really great.”

While Jarvis’ lap was not the fastest qualifying lap of the season, it was still a full four mph faster than last year’s pole. It was two-tenths of a second faster than Acura Team Penske’s Cameron, who was fastest on Friday.  Ricky Taylor qualified the second Penske Acura in third, followed by Harry Tincknell in the second Mazda. Wayne Taylor Racing’s Renger van der Zande was the fastest of the Cadillacs in fifth.

In GT Le Mans, after Ford Chip Ganassi Racing’s Richard Westbrook dominated the previous sessions, it was Corvette Racing’s Antonio Garcia who claimed the pole with a lap at 121.430 mph.  It is Garcia’s first class pole of 2019 and the fourth of his career.

Garcia’s lap was nearly one-third of a second faster than Westbrook in the No. 67 Ford.  Tommy Milner in the second Corvette was third, then BMW Team RLL’s John Edwards and Joey Hand in the second Ford GT.

GT Daytona saw Magnus Racing’s stranglehold on the top of the charts broken. Team owner/driver John Potter qualified the No. 44 Lamborghini in 12th.  At the front of the class will be Meyer Shank Racing with Curb-Agajanian’s Acuras.

Trent Hindman will start from the class pole with a lap at 116.596 mph. Hindman’s lap was three-tenths of a second faster than teammate Christina Nielsen in the Caterpillar Acura. Turner Motorsport’s Dillon Machavern put the sole BMW M6 GT3 third on the grid, followed by Scuderia Corsa’s Jeff Westphal. Montaplast by Land-Motorsport’s Ricardo Feller will start fifth.

Two cars failed to set times during the session. One is the Moorespeed Audi, which has not seen the track since Will Hardeman‘s crash in the opening practice session Friday. The other was AVS Vasser Sullivan’s No. 12 Lexus. They had different reasons why they chose not to participate in the session.

AIM Vasser-Sullivan will opt to change the engine on the No. 12 entry and will not participate in today's qualifying.
The decision was made proactively due to tomorrow's race being scheduled for six hours in duration. The car will start at the back of the field. pic.twitter.com/IaGSybWyaa

As a result of missing qualifying, the No. 12 Lexus will have to start at the rear of the field. Frankie Montecalvo was nominated to qualify, but they will have a free choice as to who will start.

The Sahlen’s Six Hours at the Glen is scheduled to go green at 9:45 a.m. Sunday morning. The race will be streamed live at NBCSports.com and on the NBC Sports App.  Highlighted coverage of the race will air via tape delay at 7 p.m. on NBCSN.