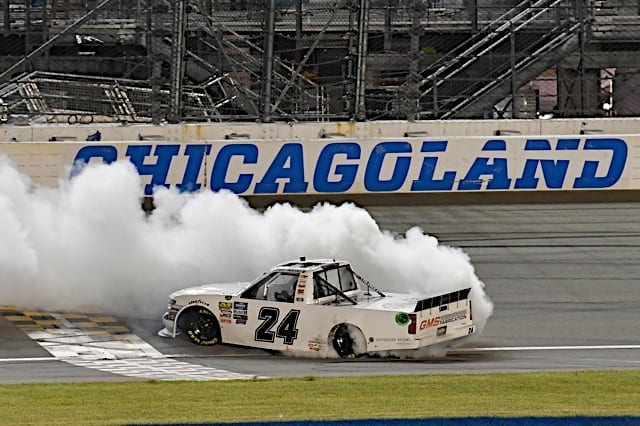 In a Nutshell: Brett Moffitt dominated a large portion of the final stage at Chicagoland Speedway to win the Camping World 225 by a more than four-second margin over Brandon Jones. Moffitt extended his lead during a late-race round of green-flag pit stops and held onto the top spot for his second win of the season. Stewart Friesen, Harrison Burton and pole sitter Austin Hill rounded out the top-five finishers.

Who Should Have Won: Moffitt. In this race last year, Moffitt scored one of his six victories en route to the 2018 NASCAR Gander Outdoors Truck Series championship. He backed that up Friday (June 28) with a strong run again this season. Moffitt led 72 of 150 laps, the most of any driver in the race, and clearly had the best-handling car over the final stage. The win marks his sixth top-five result and eighth top 10 in 12 races with GMS.

Almost immediately after the green flag flew, smoke began billowing out of the rear end of Ben Rhodes’ No. 99 Ford.

Problems for the 9⃣9⃣ right out of the gate!@benrhodes heads to pit road to try and diagnose the issue. We stay green! pic.twitter.com/WdmiPoxJSM

After spending a few minutes on pit road, Rhodes pulled his truck to the garage where the team worked to find the source of the issue. Speculation said it was an internal problem that caused the motor to build pressure and push oil out through the back of the engine block. It proved to be terminal and Rhodes finished dead last after completing only one lap.

“It’s just sickening. Everybody’s been in a situation where they just feel sick from something that’s happened to them and that’s just what this is,” a disappointed Rhodes said later from pit road. “It’s awful. It puts us in a bad spot for the playoffs picture. What hurts the most is that I thought we had a truck that could have won tonight.

“My guys are doing everything right; they’re working their butts off and we’re having weird stuff happen to us. In practice, we had an ECU and battery that needed to be changed out. Here, it was just dumping oil out of the main seal. I don’t know what to say… just a big letdown.”

But Rhodes is far from the only ThorSport Racing driver to suffer trouble at Chicagoland. Matt Crafton missed final practice due to a motor change and went most of the race without any issues. But under the fifth and final caution, his engine just shut off, causing Crafton to lose multiple positions under yellow before it refired. The driver of the No. 88 Ford managed to finish eighth but the truck could have easily run top five.

Before Crafton faced his in-race troubles, Johnny Sauter, who returned to the track after missing last week’s race at World Wide Technology Raceway at Gateway, faced early overheating issues. In fact, the problem was bad enough that he pitted early at the end of stage two to give the team more time to diagnose the problem. After some work on the truck, Sauter reported everything on his gauges appeared to be normal, but the damage had already been done. He ended up 19th, three laps down by the time the checkered flag flew.

Meanwhile, after leading 49 laps and winning stage two, Grant Enfinger got the worst of a four-wide situation shortly after a lap 78 restart. After nearly spinning and sliding back several positions, Spencer Davis got loose inside Enfinger, sending him into the outside wall before Davis spun down the track and right into the side of Austin Wayne Self’s No. 22.

Here's what has the #CampingWorld225 under the fifth caution of the night at @ChicagolndSpdwy. pic.twitter.com/R4YBeqBRTZ

Significant damage to the right rear corner of the truck took Enfinger out of contention for the win. In fact, he was even forced to make an unscheduled pit stop for a flat tire. The No. 98 team was able to keep racing but finished 16th, two laps down and far from where they expected it might end up.

After winning the 2018 title, Brett Moffitt found himself ousted from his Hattori Racing Enterprises ride in favor of Austin Hill. As late as January, it looked like he would end up sitting on the sidelines without a place to attempt to defend the title before GMS Racing went and snatched him up. Fast forward five months and here Moffitt sits, earning two wins and what would be the postseason lead with 11 playoff points.

The 2019 season is now starting to look a little like Moffitt’s 2018 championship run. At this point last year, he had wins at Atlanta Motor Speedway, Iowa Speedway and Chicagoland Speedway while sitting third in the standings. Moffitt also had six top fives in those first 11 races last year, along with results of 26th, 12th, 16th, 18th and 11th for an average finish of ninth.

This year? No win at Atlanta (Kyle Busch won that race) but victories at Iowa and Chicagoland to put on his resume. Moffitt also occupies a third-place slot in the full-season standings, some 53 points behind Grant Enfinger. Those two victories come with seven top fives, eight top 10s and an average finish of 9.1, though there’s one more start in that span this season.

Both years are shaping up to be eerily similar and puts Moffitt in a position to potentially defend his championship. Now, we all know anything can happen, especially in the playoffs (see William Byron). But 11 playoff points is a total Moffitt will be happy to carry with him throughout the championship battle.

What I found most interesting about Moffitt’s win Friday night was that it was almost like a sigh of relief for crew chief Jerry Baxter. Anytime a driver changes teams, that first win together is special, and this one was technically the first where Moffitt took the checkered flag ahead of everyone else.

“We are working really hard. All of the guys at KBM (Kyle Busch Motorsports) have been working their butts off, week in and week out. They are giving us really fast trucks. They are really fun to drive. I am just lucky to be in this position. We are fighting to get into the playoffs. It is a lot of fun for a team to try and come back and get in the playoffs. If we get in, they better watch out.

“Fourth place is a good finish, but not what we needed. We need to win. It will make it a whole lot easier to know if we are in the playoffs or not.” – Harrison Burton

KRISTL: BURTON ‘WORKED HIS BUTT OFF’ FOR 4TH-PLACE FINISH

Points Update: Grant Enfinger continues his stranglehold on the points lead, despite a rough finish at Chicagoland. Stewart Friesen sits second, 52 markers behind and just one ahead of Brett Moffitt in third. ThorSport Racing teammates Matt Crafton and Ben Rhodes round out the top five.

Harrison Burton is sixth in the standings, followed by Daytona winner Austin Hill. Todd Gilliland, Sheldon Creed and Johnny Sauter round out the top 10.

Currently, Moffitt, Hill and Sauter have victories that would take them to the playoffs with four races remaining in the regular season. Ross Chastain has the win but sits 24th in the standings, just 10 markers behind 20th-place Jennifer Jo Cobb. If the playoffs were to start today, Enfinger, Friesen, Crafton, Rhodes and Burton would join this year’s race winners.

P4 heck of a job there @HBurtonRacing and Mike and @KBMteam – HB says proud of you guys there from where we were yesterday to where we ended today way to rebound -Mike says hell of a job all day kid- now we r in the game – thank you @safelite @ToyotaRacing @deximaging as always!

Faught hard to get to the top 10. Got the air off the RR and got into the 98 trying to keep it straight. Sorry to Grant and the Niece guys. Hate tearing stuff up, not a good way to end a hard fought day of our up hill climb from the back. Hate it for everyone…

Up Next: The Gander Outdoors Truck Series takes next weekend off before heading to Kentucky Speedway on Thursday, July 11. Coverage for the Buckle Up in Your Truck 225 begins at 7:30 p.m. ET on FOX Sports 1; the race can also be heard on your local MRN affiliate or SiriusXM NASCAR Channel 90.