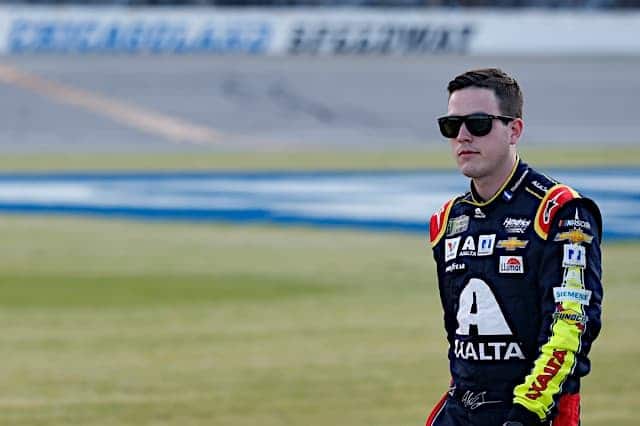 After a rain-plagued day at Chicagoland Speedway, Alex Bowman needed a push for his No. 88 car to reach victory lane in the 2019 Camping World 400. Revving the engine and driving the car into the frontstretch grass dug his tires straight into the dirt.

“I’m the dumb guy,” Bowman said. “That won the race and got stuck in the mud.”

But Bowman’s smarts on the racetrack is what earned him a win Sunday (June 30) in his 134th Monster Energy NASCAR Cup Series start. For a moment, it was all slipping away as Kyle Larson erased Bowman’s three-second lead during the final laps. For a second straight year, Larson also charged from second place and actually blew past the No. 88 Axalta Chevrolet with eight laps remaining.

The outside line is where Larson made up his time while Bowman struggled in lapped traffic. But after dropping to second, the 26-year-old from Tucson, Ariz. readjusted his line and found a way to pass Larson back.

“I’m just tired of running second,” Bowman said. “I didn’t want to do that anymore. I feel like this is the last box, aside from going and chasing the championship, that I needed personally for myself to validate my career. ”

So Bowman regrouped, slipped past Larson with six laps left and surprisingly started pulling away. Larson also lost the handle in the final few laps and wound up half-a-second back by the checkered flag.

“I could see him struggling,” Larson said. “When I got by him, good. But he could get big runs on me down the straightaways. He got to the inside, got me tight.

“I wish I could have done some things different. He did a good job regrouping and figuring out how to make his car drive better and got the win. Would have liked for him to wait another week or so but happy for him, he’s an open-wheel guy.”

The win comes at an opportune time for Bowman just weeks after major primary sponsor Nationwide said they won’t be returning for the 2020 season. As owner Rick Hendrick also searches for a replacement he now has a Cup Series winner to market. Bowman, the seventh winner in 17 Cup races this season, has finally broken through in his second full season replacing Dale Earnhardt Jr.

“This is all I’ve wanted, my whole life,” he said. “Everyone can stop giving me crap… we finally did it!”

Bowman’s victory also came after a three hour, 18-minute red flag for rain. A race scheduled for 3 p.m. ET didn’t finish until well after 9 p.m. The race was highly competitive, with 23 lead changes among 13 drivers as NASCAR’s new lower-horsepower package took well to the 1.5-mile oval.

“It was a battle,” described third-place finisher Joey Logano. “Restarts were insane. Three, four-wide all over the place.”

Jimmie Johnson and Brad Keselowski rounded out the top-five finishers. For Johnson, it was a season-best finish that came with crucial stage points which gave his No. 48 team a bit of a cushion over the rest of the teams on the playoff bubble.

“Just a solid performance,” Johnson said. “The way some of those restarts unfolded, the No. 88 had a good opportunity, got the lead and got control. Can’t wait to see Alex and congratulate him.”

Ryan Blaney, Erik Jones, William Byron, Martin Truex Jr. and pole sitter Austin Dillon rounded out the top-10 finishers. Kevin Harvick, who dominated much of the first two stages, ran 14th after leading 132 laps. A chance at victory was squandered when Harvick brought out the race’s final caution on lap 173 by scraping the outside wall.

Kyle Busch, Ryan Blaney and Clint Bowyer were some of the other playoff-caliber drivers who experienced tire trouble on Chicagoland’s aging surface. For Bowyer, a stage one wreck after a flat left him 37th; he’s now dropped to the 16th and final spot in the playoff seedings.

So the 88 got a win. And Jr. was probably in the booth to watch it. Big surprise. I bet Mr. H was smiling like Vito when he found out the money he put up for a hit was collected. Money well spent.

All I saw with this clown’s win is the start of the weak link folks into the “playoffs”. I believe that to be too of the “phantom fans” favorite (without every any proof) CLYDE.