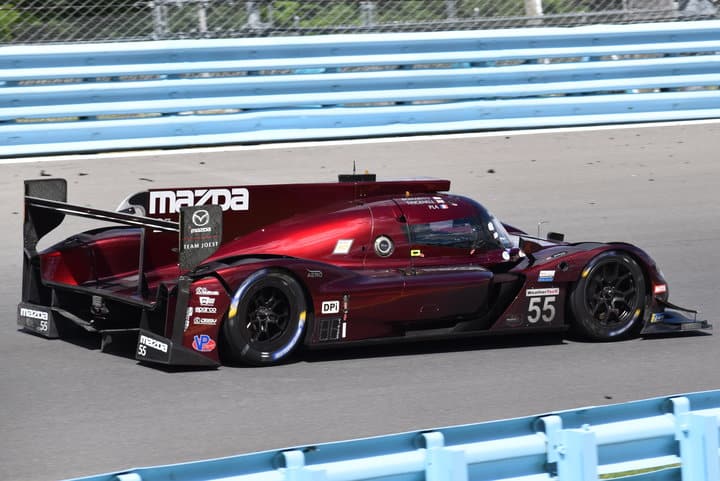 Mazda has struggled on and off for the past five years in the IMSA WeatherTech SportsCar Championship.  Their car is fast, but they’ve had bad luck.  Sunday (June 30) saw Mazda Team Joest put it all together as Harry Tincknell, Jonathan Bomarito and Olivier Pla claimed overall honors in the Sahlen’s Six Hours at the Glen.

“This was a great weekend right from the first practice, ” Tincknell said during the post-race press conference.  “As soon as we rolled the cars off of the truck, we were right on the pace, wet or dry.  We knew we had the pace; we knew we had the car.  We just had to go get it done.”

The Mazdas did not go unchallenged.  A short-fill on a pit stop with 75 minutes to go put Acura Team Penske’s Juan Pablo Montoya in the lead.  Montoya was not quite as fast as the Mazdas, but he made it as hard as possible to pass them.  Tincknell was able to get past Montoya with an aggressive move entering turn 8 with 43 minutes to go.  Oliver Jarvis was able to jump Montoya during the subsequent final round of stops to set up a Mazda Team Joest one-two finish.

The Mazdas ran nearly flawless for the whole six hours.  The only real scare occurred in the closing laps when part of the engine cover came loose on the No. 55.  Rather than fly off the car, the piece (which was still attached to the car) laid down upside-down on the left sidepod.  There was a fear in the closing laps that it would come off, or that IMSA would put the black flag on the No. 55 and force the team to address it.  That did not come to pass.

Jarvis and Tristan Nunez was one-third of a second back.  Acura Team Penske’s No. 6 for Montoya and Dane Cameron was third, followed by Wayne Taylor Racing’s Jordan Taylor and Renger van der Zande in the best in the Cadillacs.  The No. 7 Acura of Helio Castroneves and Ricky Taylor was fifth.

The LMP2 race was dominated by PR1 Mathiasen Motorsports.  Despite an incident in which Matt McMurry was hit by Castroneves in turn 1, the team led nearly the entire race.  What won them the race was an incident that involved their competition from Performance Tech Motorsports in the Inner Loop.  Andrew Evans was hit by the Porsche of Patrick Pilet and spun.  He was then hit again by BMW Team RLL’s Tom Blomqvist.  This hampered the No. 38 ORECA 07-Gibson significantly.  Later on, Evans stalled the car in the Boot, bringing out a caution.  That put the team way down the order.

From that point on, the team of McMurry, Gabriel Aubry and Eric Lux drove on to an easy class victory.  The margin of victory was a full 20 laps.

The GT Le Mans class started off with instantaneous trouble for Corvette Racing.  On the first lap, Tommy Milner had contact in the Esses with Porsche GT Team’s Laurens Vanthoor.  That contact put Milner into the wall with the rear end, then back across the track and nose-first into the wall.  Milner’s Corvette C7.R was heavily damaged and done for the day.  In addition, Riley Motorsports’ Ben Keating clipped the rear end of Milner and spun into the wall himself.  Paul Miller Racing’s Ryan Hardwick and PFAFF Motorsports’ Scott Hargrove also cut tires and were forced to pit.

Early on, Ford Chip Ganassi Racing’s Richard Westbrook and Corvette Racing’s Antonio Garcia shared the lead.  Later on, BMW Team RLL’s No. 25 came up into contention and was able to lead briefly.  Blomqvist hitting the spinning Evans in the Inner Loop significantly damaged the M8 GTE, which ultimately hurt their competitiveness.  In the final hour, an issue during refueling resulted in a pit fire.  Connor de Phillippi was able to bail out of the car safely.  One of the BMW Team RLL crewmembers ended up with his foot on fire.  No injuries were reported.

Ultimately, it was pit strategy that got the No. 911 Porsche of Pilet and Nick Tandy in the lead late in the going.  Despite that, it was far from easy as Garcia was running Tandy down in a hurry.  On the final lap, Garcia tried hard, but could not get alongside Tandy as the Porsche factory driver held on for the win.  It is the second win of the year for the No. 911 and the fourth win in a row for Porsche.

Garcia and Jan Magnussen were under a half-second back in second.  The two Ford Chip Ganassi Racing Ford GTs were third and fourth with the No. 67 ahead of the No. 66.  Due to the positioning of the overall leaders, they ended up a lap down to the class winners.  BMW Team RLL’s No. 24 for John Edwards and Jesse Krohn were fifth.

GT Daytona saw Meyer Shank Racing with Curb-Agajanian dominate much of the race with their Acura NSX GT3 EVOs.  Trent Hindman led from the pole with Montaplast by Land-Motorsport’s Ricardo Feller in quick pursuit.

Pit strategy ultimately dropped the Montaplast Audi down the order, but it kept the Acuras in play.  For much of the second half of the race, the Shank Acuras ran first and second.

Starworks Motorsport attempted to pull a fast one on the rest of the class by trying to make it to the finish with one fewer pit stop.  Ryan Dalziel saved as much fuel as he possibly could, but ran out with 13 minutes to go.  They would eventually finish three laps down in 12th.

That gave the lead to Mario Farnbacher in the No. 86 Acura.  For the previous 20 minutes, Turner Motorsport’s Bill Auberlen had been chasing him down and made it very close in the final laps.  However, Farnbacher was able to hold off the veteran Auberlen to take the win.

Auberlen, Robby Foley and Dillon Machavern finished two-thirds of a second back.  After the race, Machavern explained that their late charge to the front could have been a lot easier.

“Unfortunately, we ran into a little trouble.  We got hit by a Prototype, so we had to claw back,” Machavern told Frontstretch after the race.  “I think we had something for the win if we didn’t have to come all the way back.  Overall, a really great recovery.  We really needed it.”

There’s no rest for the weary in IMSA.  The IMSA WeatherTech SportsCar Championship will be back in action next Sunday at Canadian Tire Motorsports Park for the Mobil 1 Sportscar Grand Prix.  Coverage will air live on NBC Sunday at 1 p.m.

I need to watch more IMSA… this was a good race!