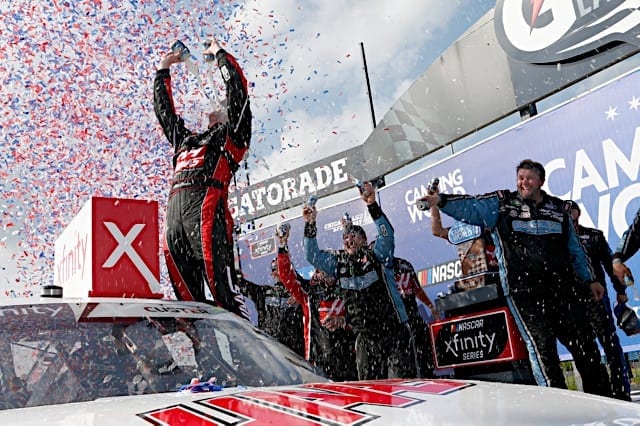 He was the quiet, unassuming replacement for Dale Earnhardt Jr. that spent years toiling in underfunded rides. Alex Bowman has spent the last year-plus racing under the shadows of his flashy, more marketable 20-something teammates: Chase Elliott and William Byron. He’s seven titles short of Jimmie Johnson’s brilliance.

Who would have expected, 17 races into the 2019 season, Bowman would have as many wins as his three Hendrick Motorsports teammates combined?

It felt appropriate for Bowman to cash in Sunday (June 30) at Chicagoland Speedway, the first race of NBC’s NASCAR season, with Earnhardt as part of the broadcast booth. (Kudos, by the way, to Earnhardt for calling the track’s Camping World 400 fairly and objectively down the stretch). The understanding of this 26-year-old Arizonan’s long journey was palpable as his victory lane interview was with 28-year-old Parker Kligerman. Both men were stuck with underfunded Cup rides for years; Bowman got the break while Kligerman didn’t.

“I didn’t change much from running 35th every week,” Bowman said. “To go from doing that to doing this is pretty incredible.”

He went on to say a whole lot of drivers can reach this level, seemingly as if he needed to empathize with Parker’s plight. But don’t be fooled; this victory has been building for months with a driver in Bowman whose talent is only now becoming readily apparent. He’s been one of the few bright spots in a down year overall for Chevrolet, posting three second-place finishes in a row this spring.

And down the stretch, when Kyle Larson ate up a three-second lead, then passed Bowman the driver refused to lose his cool. Turning around and passing Larson back is a move we rarely see these days in NASCAR’s aerodynamic ballet.

It’s clear Bowman isn’t the flashiest guy out there; his car actually got stuck in the mud after a post-race victory marked by tears and humility. But champions in athletic competitions aren’t crowned based on popularity. They’re judged by whether they can do the job; Bowman, while lacking Earnhardt’s charisma is increasingly doing it at a playoff-caliber level.

He can’t be counted out in the postseason chase, either, not after surprising most onlookers by sneaking into the round of 12 last year. Seeking a 2020 sponsor with Nationwide ready to pack up and leave after the season only adds a little extra motivation.

Bowman, in his 134th start, snuck past Byron to earn a victory first at Hendrick. Chances are, the way this kid is racing, it’s going to be the first of many. – Tom Bowles

Xfinity Series: Cole Custer is Ready for the Big Time

When you think of top prospects in lower NASCAR ranks, the names Christopher Bell and Tyler Reddick jump off the page. But this year, Cole Custer is making a statement, collecting his fourth victory of the season (15 races) on Saturday at Chicagoland.

Starting from second, Custer dominated the event. The No. 00 car led 151 laps, collecting a stage win as well. At this time last year, Custer has zero playoff points. Now, he has 26, only two behind Bell for the series-high.

Fourth win of the year!! Everyone @StewartHaasRcng gave me a unbelievable car! Looking forward to the rest of the summer ? pic.twitter.com/VQcRHxGb7m

Making his first Xfinity start of the season, Joey Logano placed second. Michael Annett, Brandon Jones and Austin Cindric rounded out the top five. Originally, Bell took the checkered flag in third, however, NASCAR deemed his car to be too low in post-race tech inspection, disqualifying him from the event and finishing last (38th). It’s the first time this season there’s been a DQ in the series.

In Logano’s post-race media availability, he said Custer is “ready” to make the next step in his career, a jump to the Cup Series. It’s the second time this season Custer has beat one of the top Cup drivers heads up for a win (Kyle Busch at Fontana), both coming on low grip, high tire wear race tracks.

Currently, there are no Cup races scheduled for Custer. In three starts last season, the California native had a best finish of 25th, though that was for Rick Ware Racing. Watch out Clint Bowyer, Daniel Suarez and Aric Almirola, Custer’s coming.

Entering Chicagoland Speedway, Brett Moffitt already had one win to his name, but he didn’t get to do the burnout or the celebrating in victory lane. The driver of the No. 24 Chevrolet was given the win when it was stripped from Ross Chastain at Iowa Speedway after his truck failed post-race inspection. This time around, Moffitt got to celebrate and has put his name in the hat as a legitimate threat for the championship with his new team in GMS Racing.

After leading a race-high 72 laps, Moffitt took his second win of the season by nearly four seconds over Brandon Jones. Stewart Friesen, Harrison Burton and polesitter Austin Hill rounded out the top five. Todd Gilliland finished sixth, followed by Ross Chastain, who struggled with handling throughout the race. Matt Crafton ended up eighth after suffering engine troubles that caused him to miss final practice and start at the rear of the field following a motor change. DGR-Crosley teammates Anthony Alfredo and Dylan Lupton rounded out the top five.

The defending series champion didn’t even know if he would have a full-time ride until January after he was released from Hattori Racing Enterprises to make way for Austin Hill. With half of this season’s races being won by Kyle Busch and Greg Biffle (Texas), it’s been easy to overlook the series regulars. Perhaps what’s most important about Moffitt’s win is that it was the first for his pairing with crew chief Jerry Baxter, something that almost always translates into a confidence booster.

While Moffitt isn’t the driver with the best average finish this season – that honor goes to ThorSport teammates Grant Enfinger and Matt Crafton at 6.4 – his numbers to date look nearly identical to those he posted last year during his championship run. That’s not to say he’s a lock to win this year’s title, but you’d be a fool to overlook him when discussing who might make it to the Championship 4. – Beth Lunkenheimer

We all knew Ty Majeski was legit when Mark Martin went out of his way to say Majeski was the next big thing. Majeski was following in the Roush Fenway Racing footsteps. But after multiple lackluster appearances, he found himself as the sole driver without a ride in the NASCAR Xfinity Series of the former drivers of the No. 60.

Majeski found a home in ARCA. Now that Majeski is without an Xfinity ride, he’s landed back in ARCA. After his first career victory a few weeks ago, Majeski is red hot. Thursday night, he was on top of his game, dominating the race at Chicagoland.

Majeski would be a legit title contender if he ran the full season, and it makes us curious if he would’ve landed in that ride sooner, would he be putting on a Michael Self level of domination in the standings. Majeski has one race remaining on his schedule that comes in the season finale at Kansas. Have Majeski’s victories given him back his confidence and landed legitimacy back in our mouths? We will find out soon enough and see if he can land something in 2020. – Christian Koelle

Sports Cars: When It Rains, It Pours For Corvette Racing

Corvette Racing’s No. 4 team has had a tough couple of weeks.  At Le Mans, this car ran as the No. 64 during the 24 Hours of Le Mans.  They were eliminated early on in this crash in the Porsche Curves.

The Corvette was extensively damaged, requiring a spare chassis to be brought out of the woodwork.  This car raced in the FIA World Endurance Championship 1000 Miles of Sebring back in March.  This car lasted less than 30 seconds in Sunday’s Sahlen’s Six Hours at the Glen before it got thrashed.

On the first lap, Porsche GT Team’s Laurens Vanthoor attempted to get to the inside of Tommy Milner in the middle of the Esses.  Contact was made, resulting in Milner first clipping the Armco on the right side of the track, then sliding across and hitting the left-side Armco head-on.  He was then hit by Scott Hargrove in the PFAFF Motorsports and Riley Motorsports’ Ben Keating.  Hargrove was able to continue with a tire change, but Keating spun and hit the wall as well, ending his day.

The crash resulted in big damage to the front and rear of the No. 4 Chevrolet Corvette C7.R.  For now, the goal is to get the car repaired in time for next weekend’s Mobil 1 Sportscar Grand Prix at Canadian Tire Motorsports Park.  With the border crossing (and everything involved with that) and the short week, it’s going to be a busy time for the Corvette team. – Phil Allaway

Max Verstappen overcame an early mechanical issue, when his anti-stall kicked in at the start, and drove from the ninth spot to the win at the Austrian Grand Prix on Sunday (June 30).  He passed the leader, Charles Leclerc, who had commanded the race since lights out, with three laps to go when he darted on the inside of the uphill turn and eased Leclerc off the track.

The two drivers bumped into one another, making contact with their front wheels, but neither suffered any damage and both continued on to the finish, as Verstappen won his second consecutive at the Red Bull Ring.  All seemed to be fine and dandy, as the finish matched what had been an excellent race, and one much needed after the dud in France.

The problem is that the incident between Verstappen and Leclerc drew the attention of the stewards and the pass endured their scrutiny.  It looked as though, what might best be described as a ‘racing incident’, would draw a penalty in a similar way that Sebastian Vettel’s Canadian Grand Prix error with Lewis Hamilton or Daniel Ricciardo’s battles in France did.

Yet, for a change, the stewards made the right call and let the results stand.  Whether or not you may agree with their call, it was time for results to stand as they happened rather than being a matter that should be taken to court and argued by lawyers.  The sport is facing a difficult issue of how to adjudicate these matters and it is important that they actually stay out of the matter at times to let the drivers be drivers.

Perhaps Vettel had it right when he said that they’re not racing for the Kindergarten Cup.  Ava Ladner

Vettel on the stewards investigation Verstappen vs Leclerc: It's racing. We're not fighting for the kindergarden's cup… We're all adults… They should leave us alone.#AustrianGP ?? #Seb5 #F1 pic.twitter.com/r4BLDHii4E

How long does one have to suck in CUP and still be considered “up and coming talent”? Just asking. Racers Reference stats over all, do tell a different story.