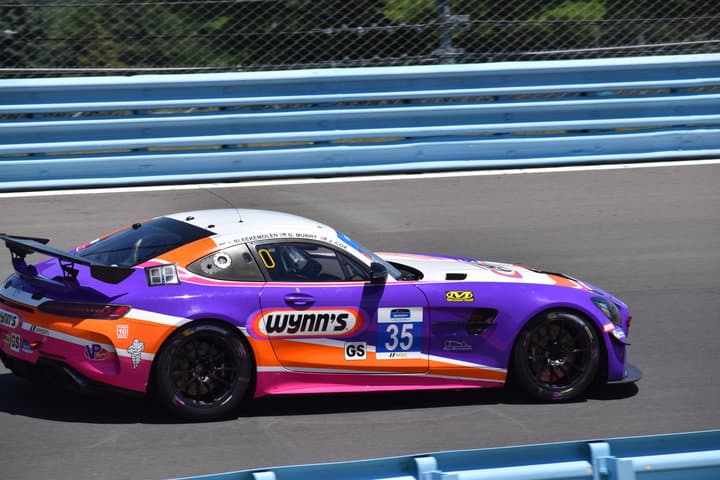 Riley Motorsports’ Mercedes-AMG GT4 of Jeroen Bleekemolen, James Cox and Dylan Murry took the lead on their final pit stop Saturday (June 29) with 40 minutes to go.  Then, it started raining.  Murry dropped back down the order on slicks in the wet, but was able to re-take the lead with five minutes to go and hold on to win the Tioga Downs 240 at the Glen.  It is the first overall victory in IMSA Michelin Pilot Challenge for Riley Motorsports and all three drivers.

“It was really stressful at the beginning,” Murry said after the race.  “We went in and that first pit stop that I made while I was driving the car, we put it on two new left side Michelin tires. I was like, ‘okay, maybe it’s the right choice, maybe it’s not as we got a little over half an hour to go.’  But it turns out [it started raining under the caution] and we didn’t put on rain tires.  It was definitely the right choice.

“This is special for me,” Murry continued.  “To be racing in my dad’s footsteps is even more special.”

Dylan’s father is David Murry, a veteran of decades of sports car racing in GT and Prototypes.  He also had one career start in the-then Winston Cup Series at Watkins Glen in 1999.

Weather was definitely the story on Saturday.  During the pre-race Fan Walk, lightning was sighted close to the track.  That resulted in a grid evacuation that delayed the start of the race for an hour.

Once the race finally got underway, Winward Racing/HTP Motorsport’s Indy Dontje led the field to green and led early.  The race was interrupted by a number of incidents, including one that involved Cox less than 15 minutes into the race when he had contact with the Andrew Wojteczko Autosport Porsche of Scott Hargrove.  Hargrove spun exiting turn 7 and went hard into the tires to bring out a caution.

After the first round of pit stops, Automatic Racing’s Rob Ecklin Jr. was leading overall in his Aston Martin.  Then, TeamTGM’s Owen Trinkler made an incredibly aggressive move from third to try to take it away in turn 1.   That move did not work.

Both drivers pulled away from the scene, but this crash spelled curtains for Trinkler’s day.  Ecklin was able to continue and finished a lap down in 21st overall (16th in Grand Sport).

In the mad scramble to avoid the wreck, Motorsports In Action’s Jesse Lazare was briefly able to take the lead.  BimmerWorld Racing’s James Clay snatched that away a lap later and dominated much of the middle portions of the race until the final round of stops under green.

A few minutes later, the rains came and doused the track, forcing teams to employ multiple strategies.  Following another restart, the sun came out and quickly dried the track.  When a dry line formed, Murry was able to get back to the front and take the win.

Clay and Devin Jones ended up second, 1.946 seconds back.  CarBahn Motorsports’ Tyler McQuarrie and Jeff Westphal were third in their Audi, while Park Place Motorsports’ Alan Brynjolffsson and Trent Hindman were fourth in their Porsche.  Rebel Rock Racing’s Andrew Davis, Frank DePew and Robin Liddell made it five manufacturers in the top five with their Camaro.

The TCR class was just as rough and tumble as Grand Sport.  Just after halfway, a battle for the class lead between JDC-Miller MotorSports’ Mikey Taylor and Fast MD Racing’s Nick Galante ended when Taylor cut his left front tire.

Due to the cut tire, Taylor understeered badly in turn 8.  Galante simply chose the wrong line and got clipped.  As you can see in the clip above, the hit broke the right rear suspension on the Fast MD Racing Audi.  Both drivers went from fighting for the lead to being out of the race.

Even the eventual winners were not spared.  With 35 minutes to go, LA Honda World Racing’s Mat Pombo put his Honda Civic Type-R TCR in the tires in turn 11.

Compared to the Mercedes of Christian Hohenadel that went into the tires first, Pombo got off easy.  He was able to extricate himself from the tires without losing much track position.  Then, he pitted for wet tires.  With three laps to go, Pombo caught the Hyundai of Bryan Herta Autosport’s Mark Wilkins.  He was able to quickly take the lead and pull away to take Honda’s first win of the year.

“I actually wrecked today and still won, you know somebody’s looking out for you when that happens,” Pombo said after the race.  “[The rain] caught me off guard on that last turn, it was just a lot of rain.  I saw it in front of me and slowed down way more than I had before, but there just wasn’t any grip.  The hardest part wasn’t the hit, it was actually trying to find reverse.  Once I got going and we didn’t lose a lap I knew we’d been in good shape.  Today was more about everyone else than it was about me to be honest.”

Pombo and Mike LaMarra‘s margin of victory was 20.905 seconds over Wilkins and pole sitter Michael Lewis.  In this case, that’s the difference between slicks and wet tires.  Roadshagger Racing’s Gavin Ernstone and Jon Morley were third in their Audi, followed by eEuroparts.com ROWE Racing’s Russell McDonough and Ryan Nash.  The No. 37 Honda of Shelby Blackstock and Tom O’Gorman recovered from a crash in qualifying to finish fifth.

Michelin Pilot Challenge teams don’t get much time to rest after this wild race.  They will be back in action Saturday at Canadian Tire Motorsports Park in Ontario.