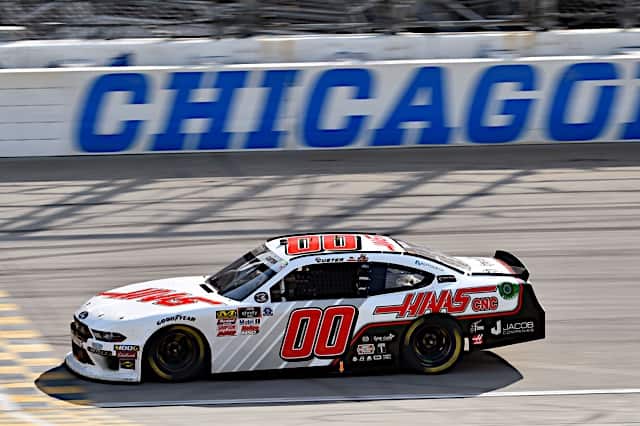 Saturday’s Xfinity Series race at Chicagoland Speedway ended with a familiar face in victory lane.  Cole Custer rolled to his fourth win in the first 15 races of 2019.  Along with Christopher Bell and Tyler Reddick, Custer has dominated the Xfinity Series this season and is one of the championship favorites.  And, just like Bell and Reddick, speculation about Custer’s future is heating up.

Previously, the leaders of Stewart-Haas Racing had indicated they were in no hurry to rush Custer to the Cup Series.  Even so, speculation ran wild last year that Custer could move up to Stewart-Haas’ Cup team as a replacement for Kurt Busch. Busch did wind up leaving SHR, but it was Daniel Suarez who ultimately filled his seat in the No. 41.  Custer remained in the Xfinity Series but has won earlier in the season and much more often compared to his first two years piloting the No. 00.  Despite being only 21 years old, Custer is building a strong case that he is ready to race at NASCAR’s highest level.

The trouble is that SHR fields four cars, the maximum amount allowed by NASCAR’s rules.  If Custer moves up in 2020, someone else has to go.  Stewart-Haas had its most successful season in terms of wins last year, but the organization has been shut out of victory lane in the Cup Series for the first 16 races of 2019.

Custer has been the best thing going for SHR this year, so who should be the most concerned about the possibility of losing their seat to him?

For starters, it is highly unlikely that Kevin Harvick will leave Stewart-Haas before he is ready to stop driving.  From the moment he took the wheel of the No. 4, Harvick has been able to elevate his game to a level that he never quite reached at Richard Childress Racing.  In five full seasons at SHR, he has won a combined 22 races and the 2014 championship.  Last year included eight of those wins and his fourth appearance in the final round of the playoffs.  Despite being winless heading to Chicagoland, Harvick has been the backbone of SHR and veteran leader of their drivers ever since Tony Stewart’s last race.  Harvick isn’t going anywhere.

Clint Bowyer is the team’s next most accomplished driver.  After a disappointing 2017 campaign, he bounced back in a big way last year.  Bowyer’s victory at Martinsville Speedway was his first points-paying Cup Series win since 2012.  He won a few months later at Michigan International Speedway, and suddenly Bowyer was looking like a serious championship threat for the first time in a long time.

However, the No. 14 team could not sustain its strong first half of the season all the way through the playoffs.  Bowyer advanced as far as the round of eight but struggled in those three races.  Just like his teammates, he is winless in 2019.

Any discussion of SHR’s other two drivers must take sponsorship into account.  Suarez finalized his deal to race the No. 41 late in the offseason.  Arris, Suarez’s main sponsor at Joe Gibbs Racing, followed him to SHR, although for fewer races than the company had sponsored Suarez while he was in the No. 19 car.

The thought is that if Suarez returns to Stewart-Haas in 2020, Arris will be free of any lingering contractual obligations to JGR and be able to appear on the No. 41 car more often.  But sponsorship aside, Suarez has put up respectable results in the No. 41.  He is six positions higher in the points standings than he was at this time last year and on pace to score more top fives and top 10s.  He is in good shape to make the playoffs barring a big collapse.

Meanwhile, Aric Almirola is in his second season in SHR’s No. 10 car.  There is no denying that Almirola’s Smithfield sponsorship played a key role in him getting that ride.  Yet Almirola exceeded a lot of people’s expectations last season.  He earned his second career victory by winning at Talladega Superspeedway in the playoffs and advanced all the way to the round of eight.  By finishing fifth in the standings, Almirola proved that he can be a contender with the right team and good equipment.

So far in 2019, Almirola has been relatively quiet most weeks but is ahead of Bowyer and Suarez in points prior to Chicagoland.  Perhaps more importantly, there are no signs of any impending split between Almirola and Smithfield.

Based strictly on performance, none of the SHR drivers deserve to get booted.  All of them are likely playoff participants.  The team’s lack of wins is better attributed to JGR’s and Team Penske’s stranglehold on the field, or, in Harvick’s case, miscues by the crew on pit road.  The drivers themselves all have legitimate claims to why they should remain on the team for at least another year.

However, sponsorship is another matter.  Harvick and Almirola are well-covered, and Suarez probably will be next year.  Bowyer, on the other hand, has only piecemeal sponsorship. Most of his team’s funding comes from Mobil 1 and Rush Truck Centers – deals that Bowyer inherited from Stewart.  Additionally, Bowyer is rumored to be in a contract year.  As a veteran driver with a history of success, he probably commands a higher price than racers like Almirola or Suarez.

If Stewart Haas Racing’s 2020 lineup comes down to a matter of money and sponsorship, then Bowyer is the most vulnerable.  Releasing Almirola or Suarez risks losing sponsorship from Smithfield and Arris.  The No. 14’s sponsorship, however, could be more easily transferred over to Custer, whose contract would surely be smaller than Bowyer’s.

It would not be a totally fair outcome for Bowyer, who has done a fine job in two and half seasons with SHR.  But this is still the organization which picked Suarez over Busch, knowing that the No. 41 team’s funding would improve even if the level of performance would likely suffer.  The second half of the 2019 season will be very important for Bowyer.  It may just decide whether or not he returns to SHR in 2020.

Who leaves SHR? The guy with the fewest $$ Duh.

Why is Stewart Haas having a sub poor season? Because they are known cheaters from last year. They are under microscopic scrutiny from nascar.