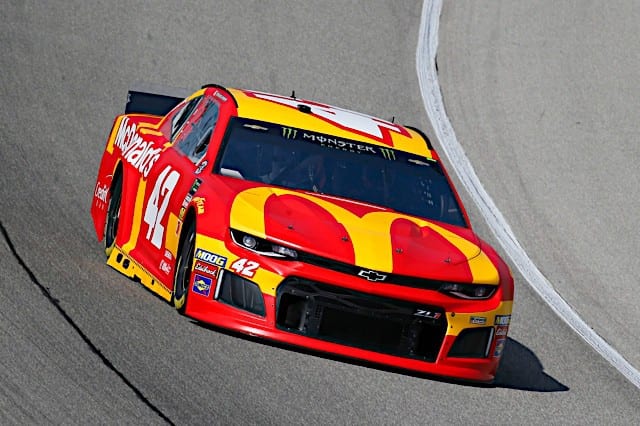 Entering the 2019 Camping World 400 at Chicagoland Speedway, Kyle Larson sat right on the playoff bubble in 15th place in the point standings. He needed a tremendous finish, or the best case scenario, a win.

He qualified his No. 42 Chip Ganassi Racing Chevrolet in 14th place. With impending storms, NASCAR opted to throw the green flag anyway, but only 11 laps ran before the caution flew, and the red flag followed just five circuits later. But after the heavy thunderstorms left the area, it was back to racing.

When the race resumed, the track was very different. The rain washed away the rubber on the track, and the temperature dropped about 20 degrees. Additionally, the end of the race occurred under the lights, something that wasn’t initially in the plans. Fortunately for Larson, he and his crew chief Chad Johnston adapted well.

Larson drove his No. 42 Chevrolet to the front. After failing to earn points in stage one, he took the lead for a single circuit on lap 74. Larson ended stage two in third after snagging the spot in the closing laps of the stage from Alex Bowman. From that point forward, Larson and Bowman raced each other closely. Larson led laps 167-170, and Bowman then led laps 171-218.

Bowman took the lead on lap 226, but Larson continued to give chase. As the laps wound down, Larson made up ground on Bowman.

“I was surprised I was able to get to him. He left an opening,” Larson explained after the race. “My balance was kind of free. I figured he was just going to take off. I was really focused on Joey [Logano] in my mirror. I tried to hold him off and then all of a sudden I was like, ‘Oh wow, I’m catching him,’ and I caught him pretty quickly.

“I was able to get by him pretty quickly too. I then thought I could pull away but he was just able to get some big runs on me. He was able to get to my inside and side-draft me on the backstretch to get by and then he did a good job of hitting his marks and getting the balance up to win.”

On the side-draft which gave Bowman the lead on lap 262, one he never relinquished, there may have been some contact between the two drivers. This current package is highly aero dependent, and momentum is key.

“Maybe it slowed me down a little bit more. It didn’t kill me or anything like that,” Larson said when asked about the potential contact. “I didn’t burn the tires up, but I kind of expected that [move]. It’s just a few laps left to go. When you side-draft throughout the race, you try to leave enough of a gap to not rough somebody up. If you hit ’em, it seems like that person gets mad. Near the end of the race, it’s fair game though.”

Larson held no hard feelings toward Bowman. And while he was happy with the speed in his car, he know Bowman would fight him hard for the top spot. The pair were both winless this season and Bowman had yet to break through to victory lane in his young career.

“When I passed him for the lead, he was very aggressive,” Larson said. “We’ve always raced each other really hard. I was able to time the run right to get by him. When I got out in front of him, he was really struggling, he was really loose off [turn] 4, a little bit off of [turn] 2, and then he found some speed. I thought if I could stretch out my lead to four or five car length gaps, I could win. But you know, he got a big enough run off of [turn] 4 to get a good line and he won.”

“Would have liked for him to have to wait another week or so, but happy for him. He’s an open-wheel guy, so cool to see.”

Reflecting on his own race, Larson was simultaneously encouraged and discouraged.

“Obviously, it was good to contend for a win,” he said. “I felt like we’ve had speed in our cars but we haven’t really contended all race long like we did today. So that was positive. It’s also discouraging not to get the win. I got another second-place finish at Chicago.

The second-place finish, his best of the season, propelled Larson up two spots in the point standings, and he has a 35 point margin above the playoff cut line.

“It was just a good solid day. From the drop of the green, it was really good. I had some bad restarts there for not getting the pushes I needed to get my momentum going. I wish I could have got a win for McDonald’s and got them to Victory Lane. But still a great day for Chevy and Hendrick engines.”

The Cup Series next heads to Daytona International Speedway for the Coke Zero Sugar 400. Larson has just one goal for next weekend’s race.

“Keep all four wheels on the ground.”

Kyle Larson needs to stop being Mr Niceguy. Be a bit more aggressive. Maybe he thought he was racing Kyle Busch and didn’t want to end up being turned.