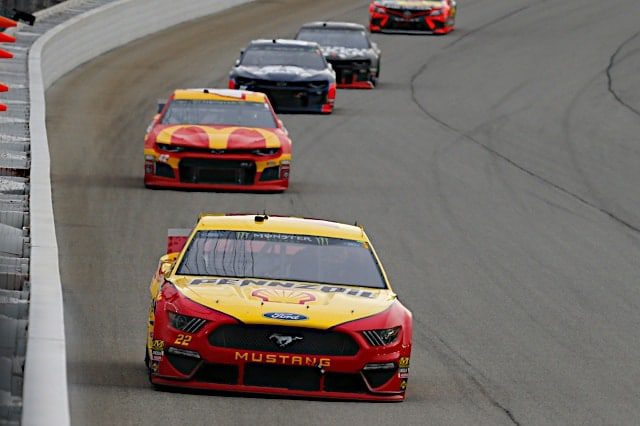 Chicagoland Speedway is a worn-out track that has not been repaved since before the venue opened in 2001. It’s not the oldest asphalt on the circuit (that goes to Auto Club Speedway), but it’s still quite competitive.

TV-wise, Chicagoland Speedway is quite important because it is the point of the season in which NBC Sports takes over from FOX Sports. The result is that you have a much different feel.

Looking back, the decision to actually start the race when they did is mind-boggling. NASCAR got about six minutes of action before lightning put the race under red. I don’t really understand the move here. Knowing what happened Saturday in Watkins Glen makes it even more confusing.

An explanation is in order. Saturday, the IMSA Michelin Pilot Challenge held the Tioga Downs 240 at the Glen. During the fan walk a little more than a half-hour before the race, reports of lightning strikes fairly close to the track came in. At that point (while I was interviewing Ryan Eversley), the fan walk was cut short and the grid evacuated. Everything stopped for what ended up being an hour. At the time, it was indicated that this was an International Speedway Corporation (ISC) policy. In addition, there is a clock that starts after the lightning strike. Everything has to be all clear for at least 15 minutes before the plan to restart everything can even be put in motion. Every lightning strike re-starts the clock.

Last I checked, Chicagoland is an ISC property. Either this situation was explained to me incorrectly, or someone goofed. Martin Truex Jr. apparently radioed in during the pace laps that he saw lightning off in the distance. If so, that, by itself, would have been enough to stop everything at that point.

My thought on that mess is simple: Don’t mess with lightning. We saw what could happen back in 2012 at Pocono with electrical storms. No one wants a repeat of that.

The storms resulted in some tough times for NBCSN. The Peacock Pit Box suffered some damage. Luckily, that should be repaired in time for Daytona this weekend.

During the three-hour red flag, there was plenty of time to review the features covered during pre-race coverage. Likely the biggest one was the debut of the new “Behind the Driver” segment. Here, a driver talks about that someone that was truly key to their development. Joey Logano talks about his working relationship with former racer Mike McLaughlin, who was employed at Joe Gibbs Racing as a driver coach of sorts.

The piece served as an interesting look back at the early days of Logano’s NASCAR career when he clearly had the talent to succeed. He needed help to harness that talent and help deal with the combination of his father Tom and Greg Zipadelli.

In addition, Dale Earnhardt Jr. discussed the battle for the win in last year’s Overton’s 400 with the combatants themselves (Kyle Busch and Kyle Larson). What you saw here was the result of drivers racing around each other all the time. They know each other’s tendencies. Busch knew that the slide was coming a mile away. Both drivers were highly complimentary of each other’s abilities. My takeaway isn’t even so much about the Slide Job (other than the fact that NBC Sports is clearly trying to capitalize on it). It’s that both drivers involved were so calm about it, both then and now. It’s really quite interesting.

There was some anger on Twitter about NBCSN’s approach to the rain delay. Nothing about how they went about doing their driver interviews, but there was a good reason for that: It was dangerous to be outside.

At the time the red flag came out, there were 30 minutes remaining in the Sahlen’s Six Hours at the Glen. Switching to that coverage would have allowed everyone in Joliet to hunker down while viewers could still see some decent racing (three of the four classes were close right to the finish in Watkins Glen Sunday). I do see the merits of such a move, especially for those in the “let’s not compete against each other, we’re all in this together” school of thought.

Instead, NBCSN chose to replay everything they had just aired an hour earlier. Maybe not the best move. Once the storm left, we got interviews. The one with Bubba Wallace was interesting in that Bubba was Bubba. He’s a genuine chap. Interesting that throwing the football around at Michigan hampered Wallace in his Legends car, while Corey LaJoie’s arm was toast the next day during the rescheduled Cup race.

The on-track product on Sunday was quite interesting. Honestly, it makes me wonder what this race would have been like if it had started earlier. When NASCAR America Sunday came on-air at 1 p.m. (noon local time), it was sunny and 91 degrees. By the time the race started, it had clouded over and cooled down significantly. Remember that the rules package actually has improved races at night as compared to last year.

Had the storms never come and the race gone off as planned in 92-degree weather, perhaps we would have having a different conversation about what we saw.

NBCSN made use of an overhead camera for a couple of the restarts Sunday. This gave viewers an excellent view of the action. It was wild and woolly and you could see a lot of it.

Overall, there was a good amount of racing for position, and NBCSN did well to give viewers as much information as they could get. It is most definitely a different feel from what you saw in the FOX Sports portion of the season. The NBC Sports booth is quite a bit younger than FOX Sports’ booth (with the exception of Jeff Gordon), and they can pick up on things a little faster. Also, they are more attentive to the race itself. Production-wise, outside of the broadcast booth, NBC Sports and FOX Sports are quite a bit more similar than you’d think, though.

Post-race coverage was relatively quick given that the coverage was beyond the scheduled sign-off by over three hours. Given the earlier damage and such, it might not have been possible to do that anyway.

Regardless, viewers still got a few post-race interviews before NBCSN left Joliet for tape-delayed coverage of the Sahlen’s Six Hours at the Glen. Still not a fan of the frontstretch interviews. It makes victory lane superfluous, and that should never happen.

Also, Alex Bowman is definitely not the first driver to get a car stuck in the grass after winning. Back in 2001, Randy LaJoie won the Sam’s Town 250 at then-Memphis Motorsports Park, which had been delayed a day due to rain (the fact that the Cup race at Martinsville got postponed is the only reason this race aired live on television). He went to the grass to celebrate. Then, this happened:

I did enjoy watching Sunday’s race. The delay was such that I could follow pretty much all of the race after the Sahlen’s Six Hours at the Glen ended. Only the first 12 laps took place before it ended. By the time it restarted, my recap of that race was already posted.

That’s all for this week. Next weekend, NASCAR returns to Daytona for 650 miles of action on the high banks. IMSA is back in action at Canadian Tire Motorsports Park as well. TV listings can be found under the Television tab.

We will provide critiques of the Cup and Xfinity races from Daytona in next week’s edition of Couch Potato Tuesday here at Frontstretch. In the Critic’s Annex later this week, we’ll cover the Xfinity Series Camping World 300 and the Gander Outdoors Truck Series Camping World 225 from Chicagoland Speedway.

I saw that piece with Logano. Good stuff. However, Zippy from all accounts heard, hated having to be a CREW CHIEF to a 18 year old. After all, he worked with the great Tony. He felt it was a let down, and in turn it was always Tony’s team, facts prove that. Past is past. But what was funny is seeing “ZIPPY” looking at Logano, the look was longing for Tony. As Mike said. “Zippy” was used to being rough with Tony, and it wasn’t flying with an 18 year old. Thank God for Mike! Anybody with a brain knew “Zippy” was longing for his lost love Tony, at that time. Bad moves all around. But it worked out well for Logano.

Yes, we no longer have “boogity, boogity, boogity,” and for that I am grateful. We do, however, have “green flag is back in the air,” and we have, “as they go up through the gears.” We also have cars coming to the pits for “four Goodyear tires and Sunoco fuel” two dozen times every round of pitstops. I will never buy another Goodyear tire as long as I live because I simply cannot stand the sound of that name. Sunoco fuel is not sold in California, so…