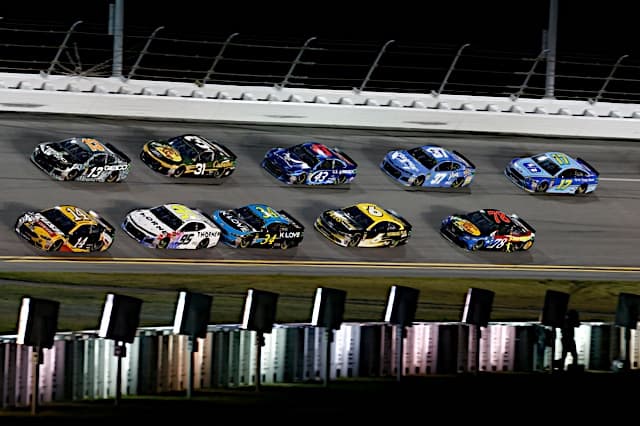 Did You Notice? … Daytona International Speedway has had a different winner for its Coke Zero 400 summer race every year this decade?

It’s a diverse field of drivers, including some from the sport’s middle-tier teams and below. Ragan won for Roush Fenway Racing, along with Stenhouse, while Almirola scored his first victory driving Richard Petty Motorsports’ No. 43.

The past five years in particular have produced an interesting pattern with the summer race. Almirola and Jones bookend the group as first-time winners who clinched their first postseason bid. The other three won Talladega Superspeedway in the spring before backing that up with a second straight superspeedway triumph at Daytona.

Add in the new handling package and we could be in for a weekend of surprises. Remember, Matt DiBenedetto (albeit with a restrictor plate on) was the driver who led the most laps in this year’s Daytona 500. He’s also two weeks removed from his best career finish, a fourth at Sonoma Raceway, driving the No. 95 Toyota for Leavine Family Racing.

But he’s not the only winless driver to watch this weekend. William Byron, this year’s Daytona 500 pole sitter, led the second-most laps in February before getting caught up in a late-race crash. Ty Dillon showed surprising strength at Talladega, leading seven laps before ultimately coming home in 17th. And rookie Ryan Preece has two career top-10 finishes in two superspeedway starts. Even Bubba Wallace, second in the 2018 Daytona 500, can’t be counted out.

A winless driver breaking through here could make the difference in a number of NASCAR Silly Season dominoes. All the drivers listed above except Byron have no chance to make the postseason on points. Stealing a bid squeezes a number of the sport’s most intriguing 2020 employment storylines: Daniel Suarez, Clint Bowyer and Erik Jones are clustered in that 15th-16th-17th range. Just above them sits Jimmie Johnson, the only driver in NASCAR history to make all 15 versions of the playoffs. The last thing they need is a Cinderella.

Did You Notice? … The NASCAR Gander Outdoors Truck Series has the best postseason battle of the sport’s top three series? Once Ross Chastain enters the top 20, four of the eight available slots will be filled by drivers who have reached victory lane. (Brett Moffitt, Johnny Sauter and Austin Hill are the other three.)

What’s intriguing is that of that group, only Moffitt sits within the top five in series points. It means the cutoff for the final spot on points is all the way up to fifth place! To bring that equivalency to Cup, the fourth driver in on points right now would be Aric Almirola. Byron, Kyle Larson, Johnson, Suarez and Bowyer would all be on the outside looking in.

The cutline for the Truck Series could climb even higher. Rhodes, winless and fifth in the standings, is the defending race winner next weekend at Kentucky Speedway. Eldora Speedway levels the playing field in a race where three winless drivers (Grant Enfinger, Stewart Friesen, Matt Crafton) ran 2-3-4 last year. It creates a situation where six, maybe seven spots will be filled by winners by the time we get to the 2019 regular season finale in August at Michigan International Speedway.

The pressure is clearly on these guys to win in a way we don’t see in NASCAR’s Cup or Xfinity series right now. In each of those divisions, several positions will be filled by points. No 2019 winner is below the cutline, increasing the pressure on those above them. And in Xfinity, the difference between 12th and 13th in points is a whopping 98 points.

Perhaps a lesson learned to shrink the playoff field in other series going forward?

NBA and baseball salaries have always been totally out of whack. As much as I admire the skill it takes to play any sport, I’m not sure any athlete is worth over 30 mil a year.

I guess one way to look at it… In NBA, NFL, and MLB, most of the stadiums are built with taxpayer dollars, and all revenue generated goes to the team. How they pulled that off, I don’t know – I bet Bruton Smith and the France family would love for the government to build and maintain racetracks while allowing them to keep all profits from the races. Also, basketballs, baseballs, footballs, and uniforms are a lot cheaper for the teams to provide than a half dozen or so racecars.

Look at the tax breaks nascar is getting, they are right there with the stick and ball sports. The renovation of Daytona sucked up major amounts of taxpayer dollars.

And who can forget the fiasco that Charlotte has found the Hall of Fame to be.

Yes, the stick and ball sports are getting major help but they aren’t alone.

The word you are looking for is “crapshoot”, as in, “restrictor plate races are crapshoot”. Don’t just look at the winners for the last ten races, look at the top ten finishers. I hope a back runner does win it. A wasted place in the chase with a driver with no hope to win and the loss of a playoff spot for one of the teams that think they are entitled to be in it.