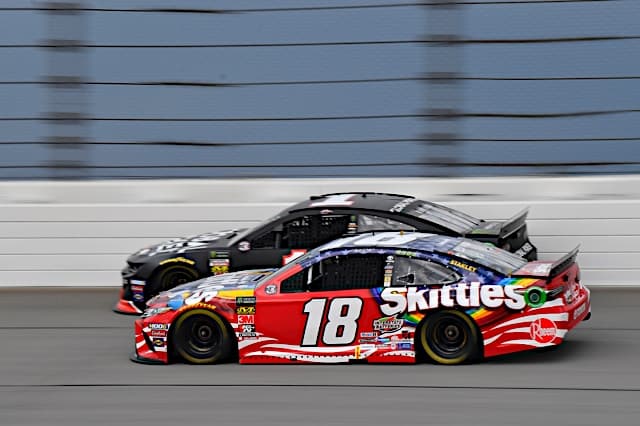 After finishing second three times in 2019 and having to wait out a three-hour delay due to a monsoon invading Chicagoland Speedway after lap 11, there was no denying Alex Bowman as the Tuscon, Arizona, native passed Kyle Larson in the closing laps to score his first career win in the Monster Energy NASCAR Cup Series.

For Joe Gibbs Racing, meanwhile, it was a rough afternoon. Denny Hamlin and Erik Jones had average days, while teammate Martin Truex Jr came home ninth. The real loser was Kyle Busch, as he tagged the wall early in stage one and could not rally; the four-time winner this season had to settle for 21st.

Here’s how Bowman’s triumph — and JGR’s issues — factored into this week’s power rankings.

It was not the day that Busch was looking or even expecting. The defending winner of the Camping World 400 hit the wall early in stage one, cut a tire and never recovered. He cut another tire on a restart and had to pit during green flag conditions.

That didn’t stop him from being a respectable guy, as he went out of his way to talk to some of the fans that were touring his Kyle Busch Motorsports shop the following day.

Noticed a few fans n the lobby at @KBMteam today so decided to go say ?? , sign a few autographs n take a couple pics ? Thx for stopping in. #RowdyNation pic.twitter.com/FgQno2sMaE

After winning at Sonoma Raceway, Truex was looking to go back-to-back, but like his teammate, it just wasn’t his day. Truex started in 18th and finished fourth in stages one and two, but it just didn’t seem like he had anything for the Hendrick Motorsports guys.

On the bright side? The Cup Series heads to Kentucky Speedway in two weeks, where Truex has won every single stage there since stage racing’s inception.

Tough weekend for us, but we managed to get some stage points and 9th at the end. We’ll take that and go to Daytona. @bassproshops #TeamToyota pic.twitter.com/Y7BzQvhjSp

“Here’s how good Truex’s season has been: He had a terrible finish in ninth, and Austin Dillon had a great finish in 10th.” –Michael Massie, Frontstretch

After a disaster of a weekend at Sonoma, Logano rebounded nicely at Chicagoland. Sure, it may have not been a win, but it was a solid top-five finish. On to Daytona International Speedway, where he and his teammate are fairly good at superspeedway tracks.

Started 19th and finished 3rd at today’s @NASCAR race at @ChicagolndSpdwy. My No. 22 @ShellMotorsport @Pennzoil @FordPerformance Team did a great job helping me battle from the back to the front and we’ll head to @DISupdates as the points leader. pic.twitter.com/qimg6BfFaz

Like teammate Logano, Keselowski was coming into the Chicagoland weekend looking to get back on track, and that is exactly what happened. Keselowski finished fifth in what was a relatively calm race for him and even collected a couple of stage points. Decent day for Keselowski and the No. 2 crew.

Sorry for those who are stuck in the rain but also pumped for those who can stay to watch us race at night. These cars are setup to put on a great race during the night time at 1.5 mile tracks. https://t.co/tyjwtO56jx

It seemed it was going to be a calm day for Hamlin, as the No. 11 car wasn’t the best but still was able to challenge for a top 10.

Even after the race, he was displeased and was not afraid to share his frustrations on Twitter.

Next up? A trip back to where he won his second Daytona 500 back in February.

Ruined our day. And for what? A nickel and dime judgment call? This intent is not why this rule was put into place. Let’s go back to using common sense. https://t.co/KdlBT234bp

We knew it was going to happen — we just didn’t know when. Chicagoland was the answer, as Bowman led 88 laps and took the No. 88 to victory lane. Even though he got his car stuck in the grass after doing his burnout, that didn’t wipe the smile off his face, as evidenced by this post on Twitter.

Never. Give. Up. #NASCAR pic.twitter.com/brx3ZAcwSM

“Bowman the Showman did it. So many second-place finishes, and just like Chase Elliott he finally broke through” –Rob Dutzar Jr, Rob’s NASCAR Blog

“Clearly the best haircut in NASCAR belongs to the newest race winner, and he is not a rookie.” Rob Tiongson, The Podium Finish

I know I keep sounding like a broken record, but ONCE AGAIN, it was the same story, different result. Harvick led five times for 132 laps and received eight stage points, but once it was all said and done, Harvick had to settle for 14th.
It is just one of those seasons for Harvick and the No. 4 team.

Being a Kevin Harvick fan in 2019 pic.twitter.com/8I9WZVqQOp

“Led the most laps, but was never the same in dirty air.”- Joy Tomlinson, Frontstretch

It was a much better day for Elliott than last week, as he actually got to finish this race! After blowing his engine in Sonoma, Elliott came back strong but was the slowest out of the four Hendrick Motorsports guys. All in all, it was a good team weekend, if you want to focus on the positives — and that is what Elliott did.

Happy for @AlexBowman88 and @Ives_Greg, they’ve been doing a nice job and definitely deserved a W!

After a struggle of a first half of the season for the No. 12 team, it seems like Blaney and Co. is turning a corner. He finished third last week in Sonoma and continued the string of good runs by capitalizing with a sixth-place finish at Chicagoland.

To top it off? He got to go to a  Chicago Cubs game the Thursday before race weekend!

The man is up! @Kimbrel46 pic.twitter.com/8FWsN2arE7

“Young Jedi Man was a lot like El Diablo with his Chicagoland finish – now you see him, now you don’t.” -Tiongson

It looked like Larson was going to break his long winless streak when he passed Bowman with under 10 to go, but Bowman charged back to the front and passed him to get his first career win. If Larson continues to run like that, that win streak will be gone before you know it.

Well thought we had that one. @AlexBowman88 did a great job. Cool to see him get his first win. Heck of a day for @TeamChevy and @TeamHendrick Engine shop. Thanks for another fast @McDonalds car @CGRnascar

While his teammate was battling for the lead and the win, it was a struggle of a day for Busch and the No. 1 team. Perhaps he will have a better run at Daytona, where has won before.

Lost a bit of the handle late in the race. Let’s ante’ up next week with a solid run @DISupdates ! #KB1 #globalpoker pic.twitter.com/xv7D4FucN4

Johnson had nothing to be ashamed of, as the seven-time champion led 10 laps and was in the top five for most of the race. He eventually ended up with his best finish of the year, concluding the event in fourth place. That No. 48 team is headed in the right direction.

Way to get it done @AlexBowman88. There is nothing like the first. I hope you burn down the house tonight. ?

“Who would have thought he’d be in the hunt at the end. Hendrick has picked up its game.” –Ed Coombs, SpeedwayMedia.com

“Something probably heard in the late 2000s: Johnson struggled all night. He only led 10 laps and finished fourth.” –Massie

Austin Dillon got one vote? Is POP POP on the panel?