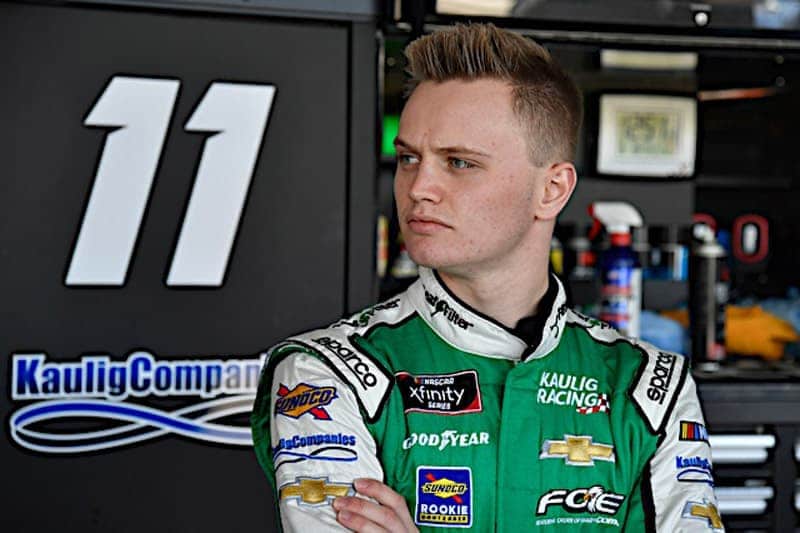 For the 2019 season, Kaulig Racing signed Justin Haley to a two-year deal in the NASCAR Xfinity Series. Driving the No. 11 Chevrolet, the 20-year-old from Winamac, Ind., is currently in 10th place in the point standings. He has one top-five finish and 11 top 10s.

Before final practice began for the Chicagoland Speedway Xfinity race this past weekend, Haley spoke with Frontstretch’s Mark Kristl. Nearly halfway through his rookie season, he repeatedly stressed the theme of “building Kaulig Racing up.”

Mark Kristl, Frontstretch: We’re approaching the halfway point of the NASCAR Xfinity Series season. What are your goals for the rest of it?

Justin Haley: We’ve built up pretty good. We understandably started behind where we wanted to start the season. But, it was pretty fair assessment. We’ve had a pretty good season up to this point. We just keep building and minimizing mistakes. We got a full year next year to get at it. We added a bunch of new guys this year as well, like my engineer Jackson [Ward]. So we’re building them up and building me up as a rookie.

Kristl: What were you behind on then?

Haley: I’m a rookie, so it takes some time to step in. This is a big step up from the [Gander Outdoors] Truck Series. There is a lot more competition, and it’s just a higher step. I was behind as a driver. We were behind as a team just because we all started fresh. This was the first year at Kaulig Racing where Chris Rice wasn’t the crew chief. We had Nick Harrison step in from [Richard Childress Racing]. At the beginning of the year, we had to build up our relationships. We’ve gotten to a strong point now where we can go and really attack the races and be aggressive on our calls.

Kristl: What have you learned most thus far this season?

Haley: I’m learning the limit of it and where you can put ’em and how the air affects an Xfinity Series car and the level of grip in the tires. It’s a lot more demanding of a schedule than the Trucks, so you’re on the road 10 more weekends a year than the Trucks. So I had a lot more time off, and this is pretty demanding stuff. It was just a big step. Overall, as a driver, I’ve just grown into racing these Xfinity cars.

Kristl: Kaulig Racing is steadily building its Xfinity Series program. The team has expanded to a second part-time car, and it will field a third car for the first time in team history in the 2019 Circle K Firecracker 250 at Daytona International Speedway. What is the difference of the team fielding two or three cars in a race as compared to the team fielding just you?

Haley: I really look forward to having Ross [Chastain] because he’s pretty fresh in the Xfinity Series. Obviously, he’s pretty hot right now. But he’s been running the Xfinity Series for a long time, and he gets the car, he gets the package. Ross should be fresh, and he can come in and help us. Next week at Daytona, we’re having three cars. Obviously, at a superspeedway, that’ll be beneficial for us being able to draft. I can use him as a tool, lean on him and get as much data back and forth [between us] as possible.

Kristl: You’ve grown up the NASCAR ladder so to speak this season. You debuted in the Monster Energy NASCAR Cup Series driving the No. 77 Spire Motorsports Chevrolet. Rate your two Cup Series races.

Haley: It’s hard to give it a grade because of the circumstances. Spire Motorsports is a brand-new team. They’re trying to build, they started from nothing, and they’re trying to build up. They only have three or four cars over there even though that’s a full-blown Cup team. I’ve had to build up the team as well. Mainly when I come over there and race those cars, it’s more beneficial to them than it is to me.

I feel like the Cup cars are the easiest cars to drive in NASCAR. They’re on the bump stops, they have no ride height and they got huge spoilers. Even last weekend at Sonoma Raceway, everything’s working. They’ve got good transmissions, they have better power, they have better rear ends, they’re more forgiving and they’re just easier to drive than the Xfinity Series cars. I think everyone in the garage will agree the Xfinity cars are the hardest to drive right now. In the Cup Series, I’ve gone over there to grow Spire Motorsports [more] than myself.

Kristl: How did the deal with Spire Motorsports come about?

Haley: I’ve always been a Spire Sports and Entertainment driver since the beginning [of my racing career]. They’re pretty close family friends. I’ve been there since I debuted in the NASCAR K&N Pro Series. I stayed with them when I raced in [the] ARCA [Menards Series] in 2014. When they need a driver, they call me up, and I’m always cool to go run a Cup Series race.

NOTE: Haley is entered as the driver of the No. 77 Chevrolet for the Coke Zero Sugar 400 at Daytona International Speedway this Saturday, July 6.

Kristl: Anymore Cup Series race lined up with them this season?

Haley: Not right now. If they call me up anymore, maybe later in the season when they get into the playoffs and they’re building up a little bit more. There’s some road courses later I’d like to do, but I’ll see how it shakes out.

Kristl: We’re approaching the one-year anniversary of your infamous Xfinity Series race at Daytona International Speedway. You won the race, but NASCAR deemed you passed below the double-yellow line. How much do you think about that race?

Haley: Not too much. I’ve been asked about that multiple times this week. I won’t prep any differently for it than any other race. I definitely have a chip on my shoulder. Going into that race, it doesn’t matter, it’s just another race for me. We got three Kaulig Racing cars, so we got to try to finish one-two-three. At the end of the day, it’s honestly more for the team than about me anyways. Last year when that happened, I felt bad for GMS Racing, my family and everyone who has got me to this point. The only thing I can do this year is try better. I won’t put anymore emphasis on it. It’s Daytona — with the draft you could get taken out in the first lap. Honestly, with the composite bodies, Daytona’s race (the 2019 Xfinity Series season opener) was pretty crappy. There was just one groove at the top, so hopefully, the racing will be good with no snooze-fest like at Talladega [Superspeedway] and Daytona.

Fronstretch: On Twitter, you commemorated celebrating your first career NASCAR Gander Outdoors Truck Series win. What do those wins means one year later?

Haley: The [World Wide Technology Raceway at] Gateway win was pretty big for me and my team. We realized we could go out and win. At that time, we were a secondary GMS Racing truck to Johnny Sauter. Being the underdogs at GMS, winning proved my spot at GMS, and we contended for a championship.

Every Truck Series win was special for different reasons. Gateway was special because it was my first win. It was a special win for my family too. The Canada [Canadian Tire Motorsports Park] win was big for me because I’ve a huge road racing background and sports cars. The Texas [Motor Speeedway] win was big for me because I’ve always run really well at Texas. Texas has always been my best track. We had the most dominant truck all night. Everyone can say I lucked into that win, but at the end of the day, if Todd Gilliland would’ve taken enough fuel, I would’ve beaten him anyways. We were winning either way.

We were a little team. GMS is a big team, but inside that big team was the No. 24 team. We had pretty big hearts for what we were doing. I’m trying to transition that over to Kaulig Racing. I felt Kaulig Racing would fit me best because it is a smaller organization. GMS was too big for me. They have 150+ employees. [grinning] I just wanted to be the focus of attention. Kaulig Racing had only 20 employees, so I could go over there and build the team up.

When team members enter the hauler as we talk, Haley pats them on the shoulder, not skipping a beat in the interview. These are his guys, and they’re building it up together. Regardless of what the racetrack is, Haley and Kaulig Racing constantly have something in mind.

Haley: Win is the goal every weekend. That’s what we strive for.