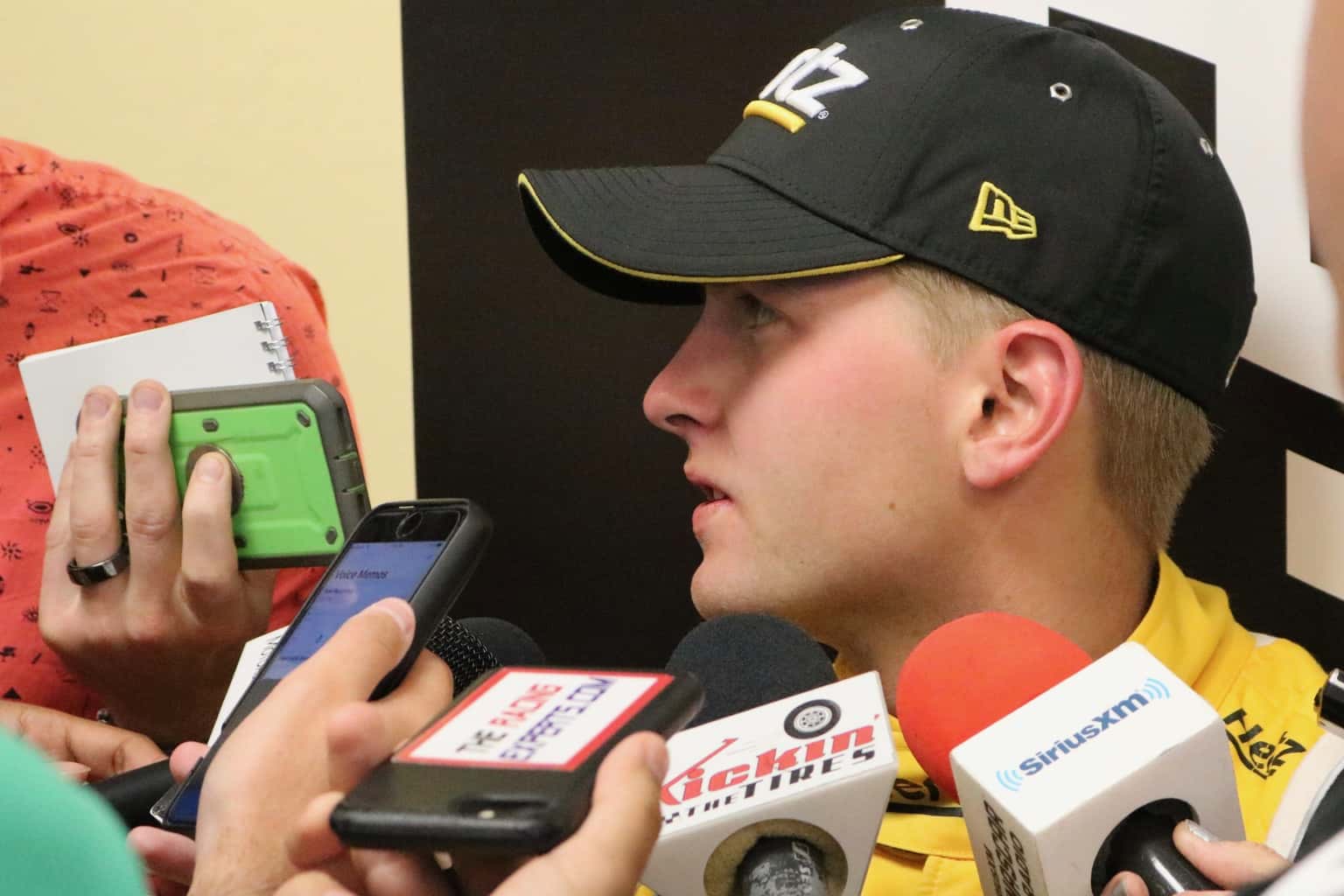 Monster Energy NASCAR Cup Series practice Thursday (July 4) at Daytona International Speedway ended with two of the sport’s big names at odds. A bump by Brad Keselowski sent William Byron onto the apron, the No. 24 heading to a backup car and Team Penske’s 2012 Cup champion making a statement.

Earlier in the day, lightning shortened the first Cup practice session just after Kyle Busch jumped to the lead. Busch posted a blistering one-lap speed of 200.754 mph to top all drivers. But teammate Martin Truex Jr. one-upped him later, posting an even higher speed of 205.936 mph in the last session of the day.

It was a band of Chevrolet Camaros that topped the chart for most of the first session until Busch rose to the lead. Busch joined behind a pack of Fords and his Joe Gibbs Racing Toyota teammates in a draft, becoming the quickest driver just before a lightning delay cut this practice short.

Ryan Newman was the lone Ford inside the top 10, posting the sixth-fastest time. Austin Dillon’s Richard Childress Racing teammate Daniel Hemric was seventh, the fastest rookie in the field. Chip Ganassi cohorts Kyle Larson and Kurt Busch were eighth and ninth, respectively, while Chase Elliott finished up the top 10.

Of the 34 vehicles posting a lap time, 22 ran for at least 10 consecutive laps. Kyle Busch led the group with an average speed of 198.785 mph. The rest of the top five were Ford drivers Brad Keselowski, Joey Logano, Kevin Harvick and Ricky Stenhouse Jr.

One minor incident early on in the session occurred when a piece of debris flew off a car. No one suffered serious damage.

After the lightning delay canceled NASCAR Xfinity Series final practice, Cup drivers rolled on track for their scheduled session. Manufacturers again worked together in packs and posted higher speeds than in the first period. Truex led a total of six drivers topping 205 mph, much higher than the typical threshold here as Daytona runs without restrictor plates for the first time since 1987.

Part-time competitor Parker Kligerman jumped to sixth in the period with the No. 96 Toyota of Gaunt Brothers Racing. Clint Bowyer, Bubba Wallace, Hemric and Ty Dillon completed the top 10.

A total of 21 cars out of the 39 that posted times ran 10 straight laps in the session. DiBenedetto, Hamlin and Jones topped 202 mph on average while Austin Dillon and Buescher finished up the top five in the group.

The caution waved with about 17 minutes left due to William Byron‘s amazing save. Brad Keselowski, leading a pack, approached Byron and tapped him in his left rear, which turned Byron around. As Byron fought to maintain control of his vehicle, Keselowski tapped Byron’s right rear which wound up with some damage.

We don't know how @WilliamByron kept it going straight. pic.twitter.com/7rhiYQ401p

Keselowski refused to apologize for the contact, some previous anger with Byron and recent superspeedway incidents resurfacing. The contact, which he blamed for a bad block by Byron was apparently intended to send a message.

“I’m not lifting,” Keselowski said to reporters. “I’m tired of getting wrecked at these [superspeedway] tracks. They’re all watching. They know.”

Byron’s team initially tried to fix the damage but the team later indicated they’ll pull out a backup car for Saturday night’s race.

Due to the incident in final practice, the @AxaltaRacing team is going to utilize a backup for this weekend’s race @DISupdates #Axalta24

Brad has forgotten about his history. Maybe he should ask Carl Edwards

Brad should start in the back of the pack. It looked intential.

I wish someone would wreck brad and Joey every race . they r just two crybaby