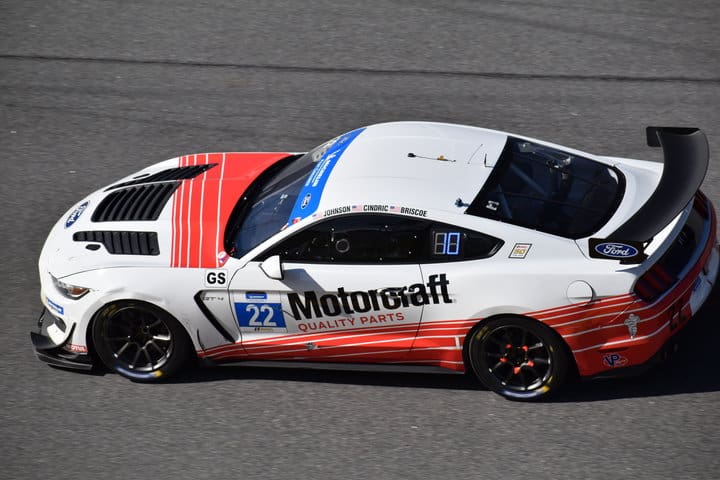 Canadian Tire Motorsports Park is the home track for Multimatic Motorsports (and by extension, the whole Multimatic operation), so they’ve brought their two Ford Mustang GT4s out to play for the first time since Sebring.  With the Gander Outdoors Truck Series off this weekend, ThorSport Racing’s drivers are back to have at it some more.  Ben Rhodes and Grant Enfinger will share the No. 15, while Matt Crafton is in the No. 22.  The entry list currently doesn’t list a co-driver for Crafton, but we were able to figure it out based on this tweet from Enfinger.

Happy 4th of July! Spending mine driving a @fordperformance Mustang with @Multimatic ! pic.twitter.com/d71J8Zf3Tb

The No. 22 is in the background.  Zooming in on the No. 22 indicates that none other than Johnny Sauter will be sharing the No. 22 with Crafton.  For Sauter, Saturday will mark his IMSA Michelin Pilot Challenge debut.

This is a change from Sebring, where Enfinger and Crafton shared the No. 22.  The No. 15 was shared by Rhodes and Myatt Snider.

The Atlantic Racing Team is entered with their Mercedes for their first start of the year.  However, they have no drivers currently listed.

Compass Racing has made a change in their McLaren.  Paul Holton is out of the car for the weekend, replaced by Paul Rees.  Holton will still be at Canadian Tire Motorsports Park as Compass Racing will be competing in the Mobil 1 SportsCar Grand Prix presented by Acura with their McLaren 720S GT3.

Finally, Automatic Racing is bringing out their previous generation Aston Martin Vantage GT4 (running No. 09) for what could be the final time.  Longtime teammates Ari Balogh and Greg Liefooghe, who raced a BMW M4 GT4 for Stephen Cameron Racing together last year, will drive.  The Cameron team has been fielding a BMW for Liefooghe and Henry Schmitt this season, but that car is not entered.

The TCR class has 14 cars entered.  JDC-Miller MotorSports has brought their second car in with defending TCR champion Britt Casey Jr. at the wheel along with Mikey Taylor.  This was a strong pairing at Mid-Ohio.  Also strong at Mid-Ohio was Mark Motors Racing with Remo Ruscitti and Marco Cirone.  They’re back for their second start of the year.

As of right now, there is one absence of note on the entry list.  LA Honda World Racing’s No. 73 for Mat Pombo and Mike LaMarra, who just won last weekend at Watkins Glen, are not currently on the entry list, while the other two cars (Nos. 37 and 52) for the team are.