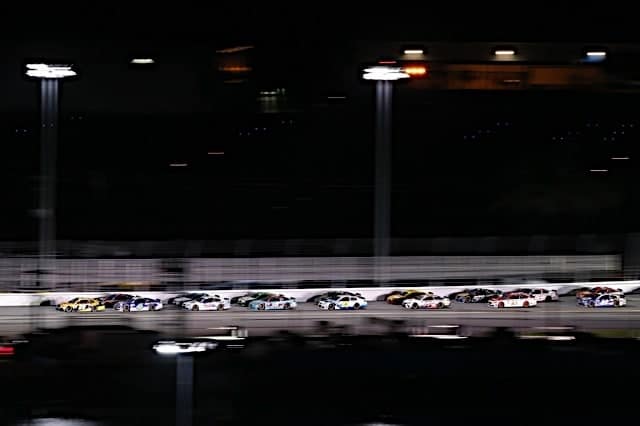 The traditional-style plate races so far this year in the Monster Energy NASCAR Cup Series have been varied from wild (Daytona International Speedway) to tame (Talladega Superspeedway). What scenario is more likely this week?

Frank Velat: Talladega became notorious for having one crash-marred race after another to the point that drivers now seem to go out of their way to avoid the big one there. When finishing becomes more important than winning, you end up with 40 drivers who are content to finish wherever as long as they don’t screw up. Daytona has a combination of prestige (Come on, it’s Daytona!) and desperation as the last chance for some drivers to sneak in a victory before the postseason. Buckle up and keep the yellow flag close by. This could get a little messy.

Mark Kristl: Because it’s a night race, the package really won’t affect the racing. We just saw good night racing at Chicagoland Speedway. The first two stages will be relatively tame, but the last few laps of each stage may lead to a caution when drivers jostle for positions. For drivers like Ricky Stenhouse Jr., this is their best shot to win and make the playoffs. Even though Jimmie Johnson is above the playoff cutline, he wants to win to guarantee his playoff berth. Far too many drivers may see this race as their Hail Mary opportunity to make the playoffs.Because the playoff picture is clearer than Talladega and Daytona earlier this season, it will be a wild one.

Amy Henderson: Wild for a few reasons.  Daytona is narrower and more difficult than Talladega, for one.  Plus, a lot of teams without wins can sniff one at Daytona, and there are all kinds of different agendas.  Those already in the playoffs can do whatever they want in terms of hanging back and waiting for everyone else to get caught in crashes or they can go for it full-bore, checkers-or-wreckers. The teams who usually have little chance of winning can race for it and can get in over their heads in a hurry.  Lots of ingredients for craziness here.

Chevrolet finally had a Cup race worth getting excited about last week. Is the Bowtie Brigade a flash in the pan, or is it peaking at the right time?

Velat: It wasn’t just that Chevy performed well as Chicagoland but rather which Chevy drivers were carrying the banner. Bowman winning really wasn’t a huge surprise given his speed. Heck, he finished second at almost everything in May except for the Indianapolis 500. But for Johnson, Kyle Larson and Austin Dillon to run well shows how far this camp has advanced. Those drivers haven’t had much to brag about this year, so it is indeed a momentum-building result.

Kristl: Chevrolet has slowly improved this season. At Talladega, it showed it’s capable of working together. A lot of Chicagoland Speedway was mistake-free for the Chevy drivers. Larson has been inconsistent this season and he put it altogether to finish in second place. Alex Bowman has been knocking on the door; he finally won. Even Kurt Busch finished inside the top 10. In their post-race interview, Bowman and Greg Ives said Hendrick is working together more than before this season. If Chevrolet teams combine forces at Daytona International Speedway, they’ll be tough to beat.

With the points gap between 12th and 13th widening last week, what Xfinity Series driver below the cutline has the best shot at winning this weekend?

Kristl: Gray Gaudling has overachieved this season, and he knows how to race at superspeedways. In the Xfinity race this season at Talladega, he finished second. Driving for BK Racing, he earned his career-best Cup Series finish. He also may be willing to take risks to win.

Henderson: At first glance, I was thinking it was between Gaulding and Brandon Brown, but while neither has a lot of Daytona experience, the experience they do have is pretty terrible; both have an average finish of worse than 30th. But you know who has been pretty strong at Daytona?  Timmy Hill.  With three top 10s in seven starts and a 16th-place average, Hill is easily the best of the playoff outsiders at Daytona. While I don’t see a win for an underdog in this race, Hill’s the best bet to prove me wrong.

Velat: Brown has an excellent shot at crashing the party. Brown has run top 20 regularly at a wide variety of tracks and led his first two laps in the Xfinity Series during the season opener in February. I would go as far as to say that if the team can avoid trouble Friday night, it will finish in the top 10 and may have a chance at the win.

This being the last Daytona 400-miler on July 4 weekend for the foreseeable future, which past summer classic stands out as the best?

Velat: While 1984 and 2001 get all of the publicity (rightfully so), I want to point out the 2007 summer blockbuster. Jamie McMurray edged out Kyle Busch in a photo finish that had everyone, even the TV booth, convinced Busch would get to the line first. Busch was actually trying to win two races in the same day, as the previous night’s Xfinity race was rained out and run the morning of the Cup event. The race was relatively clean and the gigantic draft of cars actually made it to the finish without a grinding crash. Even more impressive was that McMurray came back after nearly losing a lap after being penalized for dipping below the yellow line.

Henderson: I have to go with 2001, with Earnhardt besting the track that had claimed the life of his father a few months earlier. DEI cars were so strong on the plate tracks at the time, and Earnhardt was coming into his own as a driver.  Everything about that win just felt right after the tragic start to the year.