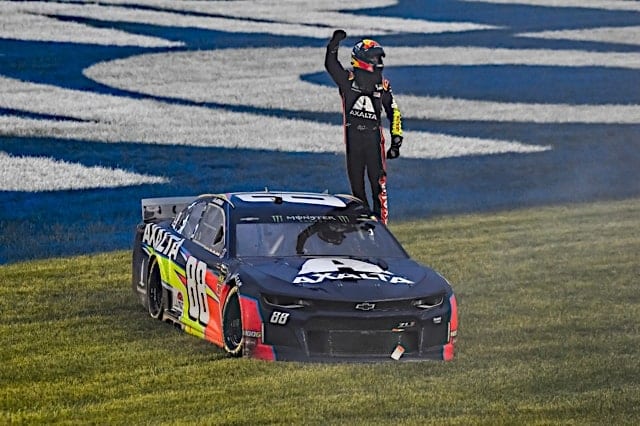 Winning at Chicagoland Speedway on Sunday night (June 30) was huge for Alex Bowman in that it gave him his first Monster Energy NASCAR Cup Series win, qualified him for next year’s All-Star Race and locked him into the 2019 playoffs.

But the win might’ve had long-term implications as well.

Having a long career in NASCAR comes down to two things: results and sponsorship. And prior to the win, Bowman had been lagging on both ends.

Bowman has raced in various NASCAR national series since 2012 and the Cup Series since 2014, and until this past weekend, all he had to show for it was a lone NASCAR Xfinity Series race trophy, plus a few pole awards. He made the playoffs in Cup last year but finished dead last in the 16-driver field. He was on pace to point his way into the postseason again this year before the Chicagoland win, but organizations like Hendrick Motorsports want winners.

Rick Hendrick was already taking a huge chance by putting Bowman in the car instead of an established driver or someone who had come through his developmental programs. Prior his current gig, Bowman had driven for the underfunded BK Racing and Tommy Baldwin Racing, and he was fired from TBR before he started racing in NXS for JR Motorsports. Dale Earnhardt Jr.‘s recommendation and Bowman’s solid subbing job for Earnhardt in 2016 led Hendrick to putting the Arizona native in the No. 88.

And that’s part of Bowman’s appeal to fans — that he worked his way from the bottom to the top of the sport, that he’s experienced struggles and hardships. But it doesn’t change the fact that it was an outside-the-box choice for Hendrick.

Hendrick has been adamant that Bowman will be back in 2020, but had Bowman gone winless both years in the No. 88, it’s reasonable to think Hendrick would replace him. Yes, Bowman is signed for one more year, but so was Kasey Kahne when Hendrick removed him from the No. 5 after 2017.

In fact, Bowman might need to win more than just once this year to ensure his future with the team. When Hendrick replaced Kahne, Kyle Busch, Joe Nemechek and Brian Vickers, each were coming off a season during which they went to victory lane. After all, Hendrick had to at least entertain the idea of potential free agents Kyle Larson, Kurt Busch, Clint Bowyer, Erik Jones and, until last week, Christopher Bell.

The relationship between Bowman and Hendrick appears to be great, but racing is a business, so Hendrick has to do what makes the most sense financially. The win for Bowman will likely be the first of many, and given his string of three straight second places earlier this season, he appears to be a threat for the championship.

So the results portion of the equation seems to be in Bowman’s favor for now. But he’s still very much lagging in the sponsorship department.

Bowman has full sponsorship for this season, but the No. 88 took a major financial blow when Nationwide announced it wouldn’t return for 2020. Nationwide was slated to sponsor 19 races next year, so that leaves the No. 88 sponsorless for more than half the season. If it was only a few races that were unsponsored, Hendrick could do what he does with William Byron‘s No. 24 and sponsor it with his personal companies such as Hendrick Autoguard. But Hendrick will lose serious money doing that for 19 races.

So basically, Bowman needs another sponsor if he’s going to keep the ride. I sincerely hope another company steps up and sponsors him, because he’s too good of a driver to lose his ride. Hendrick’s future is a lot brighter with him in the fold.

In a perfect world, or in the old NASCAR, a sponsor would see how amazing Bowman is driving this season and want to be a part of it. But sponsorship is so expensive these days that it’s harder and harder to find ones that will sign on for more than a handful of races. Hendrick got Ally Financial in the 11th hour to sponsor Jimmie Johnson for the entirety of the next two seasons, but he’s a seven-time champion who is guaranteed to get air time. It’ll be harder to nab that kind of sponsorship for a driver who is just getting going.

So while I do believe Hendrick really wants Bowman in the No. 88 next year, if HMS is unable to secure more sponsors, the team may be forced to look at a driver who brings 10-15 races worth of sponsorship. Larson could bring Credit One and McDonald’s with him for Chip Ganassi Racing, or Stewart-Haas Racing drivers Aric Almirola or Daniel Suarez could come with their respective sponsors.

Additionally, HMS could move up JR Motorsports drivers Justin Allgaier or Noah Gragson or GMS Racing driver John Hunter Nemechek, who all have sponsors attached to them. I’m not saying Gragson or Nemechek are Cup ready, but their sponsors might want them to make the jump if there’s an opening.

The odds of any of those scenarios happening are slim to none, but at this point last year, no one thought Furniture Row Racing would shut down and Martin Truex Jr. would take Suarez’s spot at Joe Gibbs Racing.

Larson, Almirola or Suarez coming over would be the closest to realistic. Every owner wants Larson, but probably none more than SHR co-owner Tony Stewart, who tried to get Larson to replace him in 2017 after he retired. If Larson and Cole Custer both end up in SHR rides in 2020, Almirola or Suarez would need another team to which to take their sponsors.

So even though Bowman has performed well enough to where he should be a lock to drive the No. 88 for years to come, it is absolutely crucial that he win even more races this year and find more sponsors as soon as possible.

Otherwise, this feel-good story could turn into a nightmare.

Well that would be a sign of what’s wrong with auto racing today. I kid without a famous father or deep pockets, who wasn’t handed the best equipment right from the beginning, loses his seat.

Pooh, what happened to C. Bell? Best prospect i have seen since Kyle Busch.