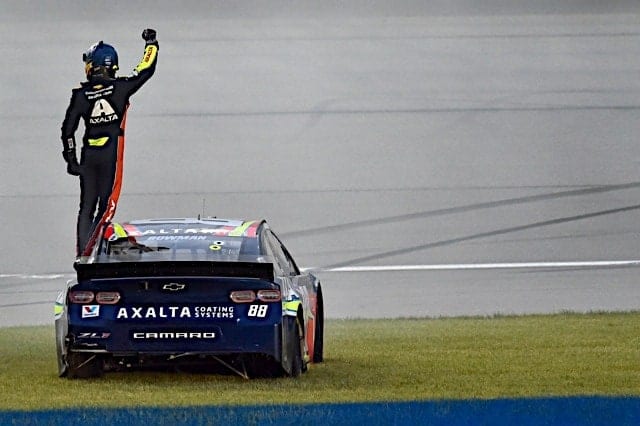 It seems almost fitting that NASCAR got a rain delay when it switched over to NBC for the second half of the season. It always seems like it rains when NBC takes over.

I saw lots of criticism about the small crowd at Chicagoland Speedway, but there is a simple fact of life in NASCAR racing nowadays: gone are the days when fans were worried about a sold-out race and scurried to buy tickets well in advance. Now, they wait until the week of the race and in many cases to see whether the weather will potentially ruin their NASCAR trip. When the weather is ominous like it was last weekend, the result is very poor week-of-the-race ticket sales and a small crowd. Mother Nature has not been kind to many NASCAR events, let alone any short track racing events in the Midwest this year.

Proud as a Peacock

I used to be a big fan of FOX Sports’ coverage of NASCAR. When the second half of the season came along, I quickly missed Mike Joy and the guys at FOX. I missed the style FOX Sports used to cover NASCAR. But those days are long gone.

Once the best play-by-play guy in auto racing, Joy isn’t as great as he used to be 10 years ago. Jeff Gordon has been a nice addition, but the FOX style  is not as entertaining, starting with the pre-race show and continuing with the race.

Meanwhile, NBC came back to the sport with some unique combinations. While play-by-play guy Rick Allen isn’t as great on Monster Energy NASCAR Cup Series races as he used to be back in the days when he was doing the Gander Outdoors Truck Series and ARCA Menards Series, the rest of the NBC team picks up the slack.

More than anything else, the folks at NBC seem to have more fun at the racetrack. Just as I know I am in the minority in enjoying the “Boogity, Boogity, Boogity” from old Darrell Waltrip, I confess to enjoying the antics of Kyle Petty and Rutledge Wood. Yes, they are corny, but it reminds me just a little of all the fun the best darn color commentary guy in the history of racing, Benny Parsons, used to have back in the day.

Jeff Burton, Dale Earnhardt Jr. and Steve Letarte give great analysis, and Krista Voda has so much fun at her job, you can’t help but smile along. I guess you could say I am proud as a peacock that NBC has our NASCAR coverage for the rest of the year.

Last week, I raved about those underdogs, and this week, you will get sick of hearing me gush about a first-time winner. This wasn’t just any first-time winner either — this was Alex Bowman.

Many years ago when I decided to launch a show about the development levels leading to NASCAR, I started a podcast called “Showtime Radio” on RaceTalkRadio and recruited a very young Bowman to be one of our regular guests. It has been a thrill watching this young man get the break he needed to make it all the way to Cup. The great news is that he is the same down-to-earth guy now that he was when he was first starting out and needed all the attention he could get.

Last Saturday on The Final Inspection Radio Show, I was asked about Bowman’s chances of winning at Chicagoland. While I was picking the usual suspects from Joe Gibbs Racing and Team Penske, I am sure glad I said he had a great shot to pull off the upset. Show host Steve Zautke called that one.

While I don’t think Bowman was racing for his career, this win certainly came at the best possible time when all the Silly Season talk is starting. Now that he got that first Cup win, I wouldn’t be surprised to see the second and maybe third wins come for Bowman the Showman this season.

After a somewhat predictable style of racing on Chicagoland’s magnificent mile and a half, it is back to the wild world of restrictor plate racing. Back in the old days when this race was known as the Firecracker 400 and it was run during the early afternoon, certain drivers did better or worse in this race than in the Daytona 500.

Since the shift to a night race, the variance between performances by the drivers is not as large. While the characterization of comparing handicapping of restrictor plate races to the spin of a roulette wheel is not correct, these events are a little more unpredictable. Also, in the big money era of NASCAR racing the plate races tend to be the big equalizer between the big teams and the little guys.

Look at who has scored the most points in the last five Daytona International Speedway races and you see Michael McDowell leading the way with Ricky Stenhouse Jr. in fifth place among active drivers. Neither guy usually cracks the top 10 at other tracks. Ryan Newman is also a sleeper this week having scored the second most points in the past five races. Only two drivers have finished on the lead lap in four of the last five races to lead the way, and only nine drivers have finished on the lead lap more than three times in the last five races, showing how much the inevitable Big One ends drivers’ days.

Win: Ryan Blaney-Picking a bit of an upset here, but Blaney is third in points over last five races here

Place: Joey Logano-Always in the hunt at any type track

Show: Clint Bowyer-Will be in the hunt if he can make it to the finish

Completely agree with the author regarding Fox; it’s become tired, with no energy whatsoever. Mike Joy really needs to hang it up and Fox needs to get Alan Bestwick back in the booth for NASCAR races. A combo of Bestwick, Gordon and McReynolds would be good