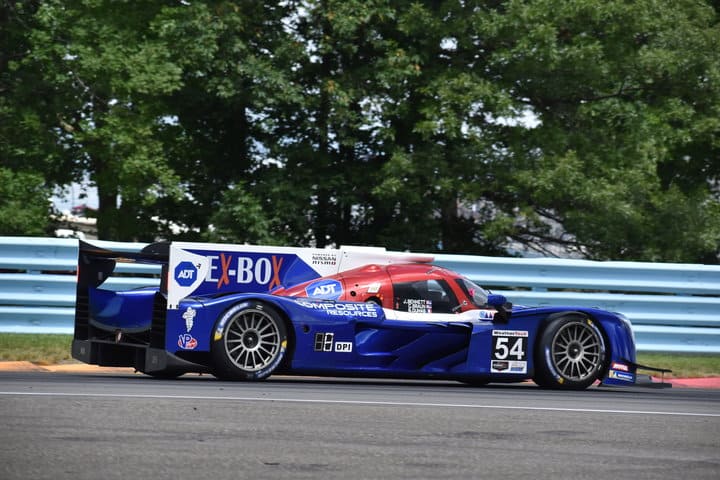 CORE autosport’s Colin Braun was the fastest man at Canadian Tire Motorsports Park last season en route to victory in an ORECA 07-Gibson.  Switching to the Nissan DPi hasn’t slowed Braun down at all as he was fastest overall in WeatherTech practice with a lap at 134.382 mph.

In the morning session, Braun was 99.999% as fast as he was in the afternoon.  He was fastest overall in the opening session with a lap at 134.380 mph, a mere one-thousandth of a second off of the fastest time of the day.

Porsche GT Team was on top in GT Le Mans.  Earl Bamber in the No. 912 Porsche was fastest with a lap at 118.729 mph, good for 14th overall.  Bamber’s lap was a tenth of a second quicker than teammate Nick Tandy.  BMW Team RLL’s Connor De Phillippi was third fastest in his BMW M8, repaired after a late-race fire Sunday in Watkins Glen.  Ford Chip Ganassi Racing’s Ryan Briscoe was fourth, while Corvette Racing’s Oliver Gavin was fifth.

GT Daytona saw Riley Motorsports’ Jeroen Bleekemolen set the pace in the early session with a lap at 115.138 mph in their Mercedes.  The team is running a backup car this weekend after their primary chassis was wrecked on the first lap of Sunday’s Sahlen’s Six Hours at the Glen.

Bleekemolen’s lap was just one-hundredth of a second faster than Magnus Racing’s Andy Lally in a Lamborghini Huracan GT3.  AIM Vasser Sullivan’s Frankie Montecalvo was third in his Lexus, followed by Paul Miller Racing’s Bryan Sellers and Jack Hawksworth in the second Lexus.

In the afternoon, Braun was just that little bit quicker to set the fastest lap of the day.  However, that time came in a session scheduled for 60 minutes that only had 32 minutes of on-track action.  Hot weather resulted in a piece of the track breaking up in turn 2.  That, plus the need to inspect the racing surface at Moss Corner, resulted in an early end to the session.

Braun’s best lap was a mere two-hundredths of a second faster than the Acura ARX-05 of Dane Cameron.  Ricky Taylor was third in the second Acura, followed by Action Express Racing’s Felipe Nasr.  Mazda Team Joest’s Jonathan Bomarito was fifth.  In LMP2, PR1 Mathiasen Motorsports’ Matt McMurry picked up the pace, turning in a lap at 128.845 mph to top the class.

GT Le Mans saw Corvette Racing at the front of the pack.  Jan Magnussen was fastest in the No. 3 with a lap at 119.276 mph.  The lap was more than half a second quicker than the No. 4 Corvette.  Richard Westbrook in the No. 67 Ford was third, then the BMWs of Jesse Krohn and De Phillippi.

GT Daytona was led by the veterans.  Turner Motorsport’s Bill Auberlen was quickest with a lap at 115.177 mph.  The lap was eight-hundredths of a second faster than Lally.  AVS Vasser Sullivan’s Richard Heistand was third, then Bleekemolen.  Park Place Motorsports’ Patrick Lindsey was fifth quickest, but things weren’t all good for the Texas-based team.  Later in the session, the car started smoking with Patrick Long at the wheel.  A hole in the oil reservoir was the culprit.