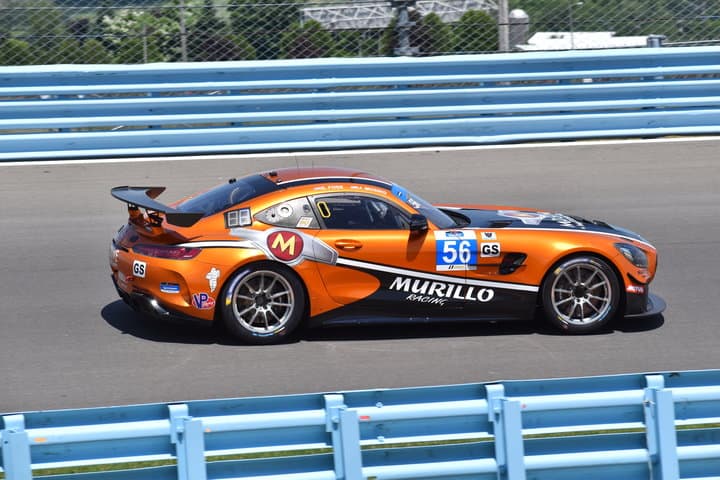 Murillo Racing’s Eric Foss turned in a lap during the first practice of the day at 106.009 mph in his Mercedes-AMG GT4. That time held up to be the fastest Michelin Pilot Challenge lap of the day at Canadian Tire Motorsports Park.

Foss’ lap was a quarter of a second faster than the McLaren of Motorsports In Action’s Jesse Lazare. TeamTGM’s Guy Cosmo was third quickest in his Mercedes with a chromaillusion-style paint scheme, followed by Automatic Racing’s Greg Liefooghe. Between the preliminary entry list being released and practice, Automatic Racing switched their cars around so that Liefooghe and Ari Balogh are driving the new Aston Martin this weekend. Last weekend’s winner Dylan Murry was fifth fastest.

The fastest of the ThorSport contingent in the session was Ben Rhodes, who ended up 17th quickest. His lap was still just within a second of Foss’ quick lap.

In TCR, Bryan Herta Autosport’s Michael Lewis continued to show the pace in his Hyundai Veloster N TCR that allowed him to win the class pole in Watkins Glen. Lewis turned in a lap at 104.782 mph to top the class. The lap was good enough for a tie for 15th overall with the Grand Sport-class Porsche of Trent Hindman.

Lewis’ lap was three-sevenths of a second faster than Mikey Taylor in the part-time No. 17 Audi for JDC-Miller MotorSports. Mark Motors Racing’s Marco Cirone was third fastest, followed by LA Honda World Racing’s Colin Mullan. Mason Filippi was fifth in the second Hyundai.

The afternoon practice session was held in the heat of the day. As a result, the speeds were down. TeamTGM’s Owen Trinkler was fastest overall in his Mercedes with a lap at 105.479 mph.

Trinkler’s lap was just three-hundredths of a second faster than Rhodes. Since the Gander Outdoors Truck Series will race at CTMP as part of the first round of the playoffs, getting any track time on the 2.459-mile road course is key for Rhodes and his ThorSport Racing teammates.

Liddell was third fastest, followed by CarBahn Motorsports’ Tyler McQuarrie in his Audi and Marcelli. BimmerWorld Racing’s Devin Jones was sixth in his BMW, then Cosmo, Hindman and PF Racing’s Jade Buford. Liefooghe was 10th quickest.

TCR saw JDC-Miller MotorSports show their strength once again. Taylor was fastest in the part-time No. 17 Audi with a lap at 104.303 mph, good for 16th overall. Taylor’s lap was nine-hundredths of a second faster than LA Honda World Racing’s Tom O’Gorman. Remo Ruscitti in the Mark Motors Audi was third, followed by Fast MD Racing’s James Vance in his home race. Stephen Simpson in JDC-Miller MotorSports’ full-time No. 54 was fifth.

Qualifying for the Canadian Tire Motorsports Park 120 is scheduled for 9:40 a.m. Saturday morning. The two-hour race is scheduled to go green at 1:55 p.m. and will be streamed live at IMSA.com and FansChoice.tv.