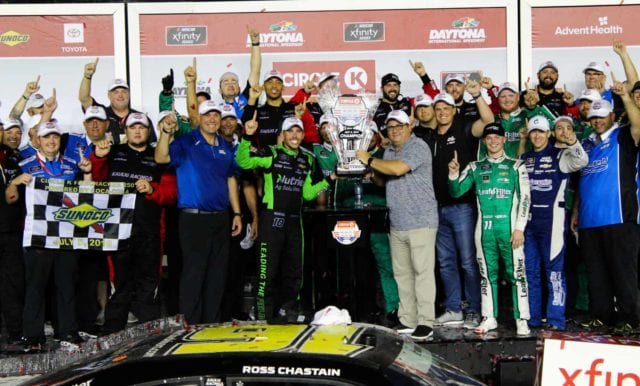 Ross Chastain was determined to give Kaulig Racing owner Matt Kaulig his first NASCAR Xfinity Series win. Throughout the 2019 Circle K Firecracker 250, Chastain wheeled his No. 16 Chevrolet wide across every lane in the race. His aggressive driving was noticeable.

That aggression paid off, as Chastain won the rain-delayed race at Daytona on Friday night, scoring his his second career NASCAR Xfinity Series win. After switching points eligibility from the Xfinity Series to the NASCAR Gander Outdoors Truck Series earlier this season (where he’s already won), Chastain will most assuredly compete in the Truck Series playoffs this season. All he wanted to do in this race was give Kaulig Racing a trophy. He achieved that exactly that after leading 49 of the 100 laps in the race.

Kaulig Racing had its career-best Xfinity Series race. In addition to Chastain winning the race, the team swept all three stages and the podium of top three finishing positions. Justin Haley finished in second place and AJ Allmendinger finished in third place — though Allmendinger’s Chevy failed post-race inspection, and his result was disqualified.

The Circle K Firecracker 250 saw plenty of cautions, and a few instances where NASCAR did not throw the caution flag.

The first caution came on lap 10 when Caesar Bacarella lost control of his No. 90 DGM Racing Chevrolet. He spun, and several drivers were involved. Landon Cassill was the only driver taken out in this caution due to a bent track bar.

As the laps in the first stage wound down, Chastain blocked Tyler Reddick. Chastain narrowly missed the wall, but Reddick made contact with it. The stack-up from the two drivers resulted in Sheldon Creed and John Hunter Nemechek simultaneously spinning from contact, bringing out the second caution. With such wet grass, both cars splitters were damaged.

Chastain won the first stage. On the final lap of the first stage, Haley blocked several drivers from making a run to the inside. They passed him low, but NASCAR deemed he forced them below the double-yellow line. As a result, NASCAR sent him to the tail end of the longest line to begin the second stage.

Halfway through the second stage on lap 45, Reddick had a flat left rear tire. He slid up the track, but amazingly he only collected Chase Briscoe.

A big crash for Chase Briscoe.

Tyler Reddick has a flat left-rear tire and gets into the No. 98 and sends him hard into the inside wall. Watch @XfinityRacing on NBCSN or stream: https://t.co/CAYgs2g5vY pic.twitter.com/25COS2r15E

At the end of the second stage, Allmendinger blocked Chastain to give Kaulig Racing the first two stage wins.

On lap 73, a wreck took place in the middle of the pack. Notably, many of those cars were from underfunded teams, so it was an expensive day for them at Daytona International Speedway.

With 21 laps to go, Riley Herbst spun, but there was no caution flag. Seven laps later, the amount of cars still on track took a massive hit when another big wreck occurred.

This wreck forced NASCAR to red flag the race for cleanup. Due to all the wet grass from rains that pushed back the scheduled start of the race by more than two hours, several cars needed assistance to get out of the grass. Under NASCAR rules, because of the wet grass, drivers were allowed to receive a push out of the grass without ending their race prematurely.

When the race restarted for the final time, Shane Lee and Justin Allgaier both spun separately on different laps. However, like Herbst, neither driver hit anything. They both continued racing, and the race stayed green.

The lack of strong contenders outside of the Kaulig Racing trio made it difficult for anyone to gang up to make a run. Seemingly all by himself, Allmendinger raced back from outside the top five into third place, prior to the inspection failure. Despite that disappointment, this was his first NASCAR Xfinity Series race at Daytona International Speedway, and the semi-retired driver showed no rust.

Also landing in the top five were Christopher Bell and Austin Cindric. Bell dodged every accident, and Cindric recovered from his involvement in the first caution flag period to come home in fourth place. Stephen Leicht became the top beneficiary of Allmendinger’s disqualification, earning his first Xfinity Series top-five result in more than a decade.

Only 15 drivers finished on the lead lap and just 22 drivers were running to see the checkered flag, so almost half the field wrecked out of the race. This was a far cry from the season-opener at Daytona International Speedway, which saw a “follow the leader” mentality around the high lane.

Immediately after he won, Chastain celebrated in his trademark fashion. He smashed a watermelon on the finish line, overjoyed with the victory and delighted to share it with the fans. In victory lane, he placed a watermelon on the roof of his car. Haley and Allmendinger applauded the team effort, and Matt Kaulig quickly learned the location of victory lane. Kaulig Racing is in its fourth NASCAR Xfinity Series season, and it finally earned its first win.