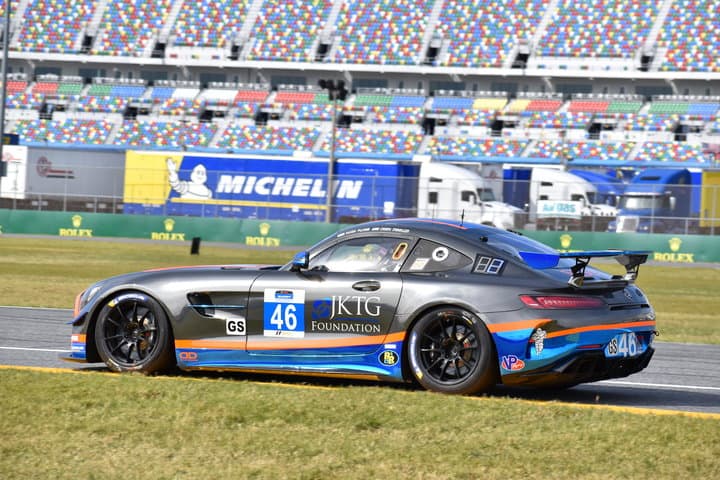 TeamTGM’s Owen Trinkler won the pole for Saturday’s Canadian Tire Motorsports Park 120 with the fastest Michelin Pilot Challenge lap of the weekend Saturday morning.  The lap of 106.271 mph was two-tenths of a second faster than the best practice lap on Friday.

Trinkler’s lap was seven-hundredths of a second faster than CarBahn Motorsports’ Tyler McQuarrie in his Audi.  Gander Outdoors Truck Series regular Ben Rhodes was fastest overall in the 15-minute practice session that immediately preceded qualifying.  Once on the clock for real, Rhodes qualified his Ford Mustang GT4 third overall, two-tenths of a second off of Trinkler.

KohR Motorsports’ Nate Stacy will start fourth in another Ford, while Murillo Racing’s Jeff Mosing will start his Mercedes in fifth.  Russell Ward will start sixth in the Mobil 1 Mercedes, then Motorsports In Action’s Corey Fergus in a McLaren.  Riley Motorsports’ James Cox will start eighth, while Compass Racing’s Paul Rees and Automatic Racing’s Ari Balogh will round out the top 10.  Matt Crafton qualified the second Multimatic Motorsports Ford 15th in class (19th overall).

Canadian Tire Motorsports Park is an interesting track when it comes to the TCR cars.  They are faster in the first sector of the track than the Grand Sport cars by quite a bit.  The fastest TCR first sector is more than three-tenths of a second faster than anyone in Grand Sport.

That provides a decent explanation for how jumbled the actual qualifying results are.  JDC-Miller MotorSports’ Mikey Taylor won the TCR class pole with a lap at 105.417 mph.  With 24 Grand Sport cars in the field, this lap was good enough for seventh overall, two-thirds of a second off of the overall pole.

Three cars out of the 38 entrants did not set times during the session.  They were the No. 8 eEuroparts.com ROWE Racing Audi R8 LMS GT4 and the No. 59 KohR Motorsports Ford Mustang GT4 in Grand Sport, along with the No. 84 Atlanta Speedwerks Honda Civic Type-R TCR in the TCR class.

The Canadian Tire Motorsports Park 120 is due to go green at 1:55 p.m.  The race will be streamed live at IMSA.com and FansChoice.tv.