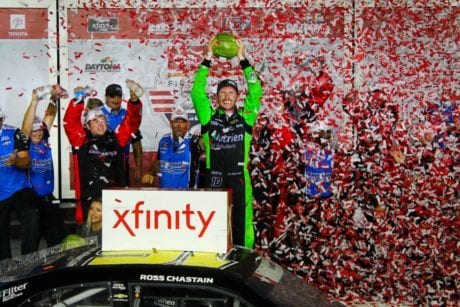 What a difference a few months can make. The NASCAR Xfinity Series season opener in Daytona was one of the dullest superspeedway races in recent memory, notable mostly for Michael Annett breaking his long streak of career futility. Anyone who tried stepping out of line immediately got shuffled back, meaning that long, tedious single-file parades were the norm.

In stark contrast, the Circle K Firecracker 250 had a little bit of everything: late night racing forced by a two-plus-hour rain delay before the green flag dropped, pit stops by cars facing in the wrong direction, drivers getting stuck in the muddy infield after incidents, and watermelons getting smashed by the winner, who gave his team its first ever series win.

With all that transpired, it felt right to have Ross Chastain give Kaulig Racing its breakthrough victory. The Watermelon Man was racing for nothing but the trophy after switching his points declaration to the Truck Series a few weeks prior, and the daring game of block or be blocked that was on display all night suited his risk-taking driving style perfectly. If “checkers or wreckers” had a Wikipedia entry, the references section would include links to some of the moves that Chastain was making.

While Chastain was smashing melons again, the rest of the Kaulig Racing organization was feeling good as well — at least until post-race inspection. Justin Haley battled back from yet another mishap involving the double yellow line, this time because NASCAR felt he forced other drivers below it, to finish second. AJ Allmendinger came out of semi-retirement and would have finished off a team sweep of the podium if only his No. 10 Chevrolet had an engine that could have held a vacuum.

Together, the three Kaulig Racing entries led 86 of the 100 laps, which is all the more startling when you consider that none of its cars had ever finished better than fourth prior to this weekend. It remains to be seen if this kind of muscle-flexing means anything in the context of the Xfinity Series championship, because only Haley is running for the title, and he’s not even locked into the playoffs yet (though it would take an epic disaster for him not to make it in on points). None of that matters right now, only that the team was able to power through the chaos to find the success that had so far eluded it. Having this season’s most exciting driver at the center of it was just a bonus, albeit a fitting one.

It would have been a real shame if the fans who stuck around Daytona International Speedway to watch the race begin after 10:00 p.m. ET got another dose of the procession that took place in February. Fortunately, that was not the case, with the action on Friday night much closer to the two-by-two pack racing that often comes to mind when the word “superspeedway” is dropped into conversation.

That’s not to say it was perfect. The blocking being done at the front of the pack was possible mostly because the runs that cars running together weren’t typically fast enough to shoot the head car past the leader. There’s always a little jumping back and forth between lines at Daytona, but the current Xfinity Series cars almost reward it because there’s not as much risk as there would be for the leader if the vehicles had just a little more raw speed.

Still, there was plenty of opportunity for drivers to make moves, which simply wasn’t the case five months ago. Tyler Reddick got shuffled out of the lead early on and dropped back about 20 spots, but that wasn’t a reoccurring theme.

Superspeedway racing is never going to be the favorite of many drivers (or fabricators, for that matter), and there’s an inherent unfairness to its randomness. At its best, though, it’s a breathtaking spectacle, and as Dale Earnhardt Jr. noted on the NBCSN broadcast, it’s hard to recall many recent examples that were as intense from beginning to end as this one.

Speaking of inherent unfairness, the wrecks at Daytona don’t care if you’re having an exceptionally good night. If you’re in the wrong place at the wrong time, into the wall or around you go.

As evidence, please consider the case of Timmy Hill. The 26-year-old entered the Firecracker 250 with the third-fewest points of any driver to make at least 14 Xfinity Series starts in 2019. His best finish prior to Friday was 17th at Dover, yet there he was, wheeling his No. 66 Toyota inside the top 10 on more than one occasion.

Unfortunately, he was just outside that range during the one huge wreck that started further up in the field, as Annett got bumped from behind, spinning sideways into the wall and leaving a trail of destruction in his wake. That spelled doom for Hill.

THE BIG ONE STRIKES AGAIN AT @DISUPDATES!

A 20th-place finish isn’t horrible for Hill’s bunch, but it could have been so much better, and it was simply bad luck that had them three laps down at the end.

Cole Custer could be forgiven if he started lobbying to get Daytona off the schedule. Despite his talent and increasingly impressive performances at a variety of tracks, the World Center of Speed isn’t one of them. Custer entered Friday’s race without a top-10 finish at DIS in any series, and he left with that dubious streak intact.

The ugly part is that he almost had a chance, despite some early damage to his No. 00 Ford. Custer finished eighth in the second stage and at the very least seemed primed to finish strong by his own particular standards.

Then he got caught up in the second big multi-car wreck of the race, dooming him to a 26th-place finish. Not only that, but there’s always one hit during a major accident that is harder than it looks at regular speed, and slow-motion replays showed that Custer took a hard lick when colliding with Annett.

Whether Custer moves up to the Cup Series in 2020 or not, he’s going to have to visit Daytona twice a season. Just don’t expect him to be thrilled about it.

Where do you want to start? Kaulig Racing, still very much an underdog in the minds of many, may have shaken that status for good after its 1-2 finish. But despite the first Big One of the night wreaking havoc on the mid-pack and back markers, a number of them still had nights to remember.

Stephen Leicht turned in his first top-five result in more than a decade, and only his fourth of all time. Right behind him, Brandon Brown enjoyed his first ever top-1o finish, as did Matt Mills, who got to move up from 11th after Allmendinger’s disqualification. Seventh-place Jeff Green broke a streak of 14 consecutive DNFs that started the week after he ran seventh in the first Daytona race of 2019.

In fact, every driver from 5th through 14th was an underdog, meaning the only way things could have gone any better for them collectively is if one of them would have won.

No Cup Series drivers were entered, but pretty soon Chastain is going to be considered an interloper too. Just, you know, from a lower series instead of a higher one.

“I watched these races as a kid every Fourth of July. Never could come in the spring because we were growing watermelons.” – Ross Chastain

“I was just trying to be a good teammate there. I knew me and the 16, one of us had it won. I didn’t want to back up and make the 20 have a run, so I kind of gave it up to give Kaulig Racing one.” – Justin Haley

“I maybe could have laid back a little bit, but man, you lay back and the guy behind you tries to make a move on you.” – Christopher Bell

Sometimes Daytona doesn’t quite live up to the hype, unable to bear the weight of expectations thrust upon it as the home of the world’s most famous stock car race. This wasn’t one of those times, as the Circle K Firecracker 250 had pretty much everything one could ask for save for a last lap pass or mad scramble to the checkered flag.

Who knows if that will be the case next February, given how different the two 2019 races were from each other. Maybe we can trick the track into thinking there’s an early summer during Speedweeks 2020.

Back to the intermediate tracks we go, with Kentucky Speedway in the on-deck circle. The third (and final, at least for now) Alsco 300 will take place on July 13, making it back to back Friday night events in the Xfinity Series.

Bell is the defending race winner, winning last year after coming from the rear of the field following a spin in qualifying. Custer and Reddick were fifth and sixth, respectively, so this has the feel of a return to the status quo after Kaulig Racing’s night in the spotlight.

Coverage is set for 7:30 p.m. on NBCSN, though that was supposed to be the case this weekend as well, and it didn’t quite work out that way.