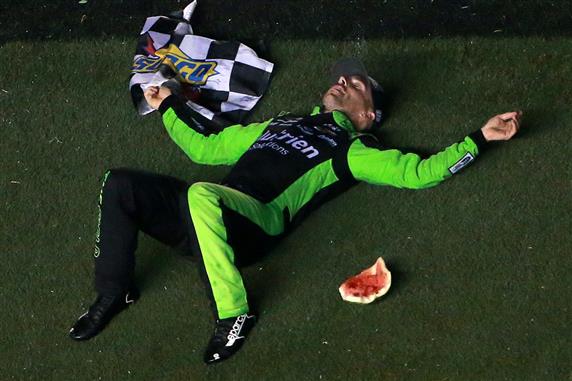 Last July, Justin Haley left Daytona International Speedway feeling like the track might have owed him one. His thrilling last-lap pass of Kyle Larson in the NASCAR Xfinity Series race was disallowed when officials determined he dipped below the yellow line. A potential win in his second NXS start turned into a disappointing 16th-place result.

Haley was certainly due for a make-up call. But nothing could have prepared him for the type of gift bestowed upon him in Sunday’s (July 7) Coke Zero Sugar 400.

In just his second Monster Energy NASCAR Cup Series start, Haley spent the race simply trying to miss the wrecks. He was driving for a team, Spire Motorsports, whose No. 77 hadn’t run better than 28th since the Daytona 500. It had never finished better than two laps down, let alone contended for victory in any race this season.

But a freak series of circumstances created a one-in-a-million opportunity. Haley earned the free pass on a lap 60 caution after falling a lap down early. He then lurked near the back of the draft heading into the final stage. Why? The underdog team simply wanted to leave with their car in one piece.

“You have to stay far enough back so that if the Big One does occur, you can avoid it,” Haley said. “It’s definitely kind of like a chess match of keeping a gap enough but not losing it.”

The strategy worked great when Austin Dillon and Clint Bowyer tangled in front of the field with 40 laps to go. The Big One ensued and nearly half the field was wiped out in a matter of seconds. As NASCAR sorted out the wreckage, dark clouds gathered which caused a number of teams to take their chances and stay out under the caution flag.

For a moment, that left Kurt Busch out in front. But then he pitted once NASCAR gave the one to go signal indicating they were about to go green-flag racing. Haley’s crew chief, Peter Sospenzo, decided to take his chances, leaving their small-time Chevrolet team in front when lightning flashed in the distance seconds later.

That triggered NASCAR’s lightning policy, causing a red flag and shelter-in-place edict for the fans. Hours of near-misses went by until rain finally hit, ending the race and earning Haley the most improbable victory in modern NASCAR history.

“It’s pretty surreal,” Haley said. “To come over and do something special with a new team is definitely unbelievable.”

“It’s a big f—ing deal,” added Spire co-owner T.J. Puchyr. “Look, it’s not lost on me that luck was on our side today.

“But I’m not going to feel bad about it at all. I’m going to love it. We’re just going to continue to be the Little Engine That Could and build this thing as best we can and go from here.”

The question, of course, is what Spire is actually building. Puchyr was tight-lipped on future plans and deferred questions about whether his full-time business, a sports agency called Spire Sports & Entertainment, should be representing drivers and also running a NASCAR team. They have no full-time driver, a pay-to-play operation that has started out as little more than an outgrowth of perennial backmarker Premium Motorsports.

Spire’s NASCAR charter, bought for $6 million from Furniture Row Racing, guarantees them admission into every race. But other than Haley and a one-race deal with a retiring Jamie McMurray in the Daytona 500, their team has done little than show up and ride around at the back. Critics feel the owners are in it to make money, not compete, making an unlikely win the wrong message to send for a sport who’s failed to attract new owners and manufacturers in recent years.

Puchyr, of course, would beg to differ.

“There’s a lot of people out there [who think] we’re doing this as a cash grab the way the charter system works,” he said. “Quite frankly, that’s not true.

“I think you need to spend some time and get to know us a little bit more. It’s a new world.”

A new world, indeed. It’s a 2019 season where after 18 races, teams like Stewart-Haas Racing aren’t Cup Series winners and a team like Spire Motorsports is. And a driver in Haley, just 20 years old suddenly finds himself part of the 2020 NASCAR All-Star Race despite no full-time Cup Series ride.

Kaulig Racing showed up to Daytona with a plan, and oh, isn’t it wonderful when a plan comes together.

Ross Chastain dominated Friday’s (July 5), Circle K Firecracker 250 at Daytona, leading 49 of 100 laps. However, he had to hold off teammates Justin Haley and AJ Allmendinger coming to the checkered flag, so Kaulig Racing could pick up its first 1-2-3 finish in team history. Or so we thought.

Unlike when Chastain took the checkered flag first at Iowa Speedway in the Truck Series, his car did pass inspection, awarding Kaulig Racing its first victory. Haley’s No. 11 Chevrolet passed inspection, too. However, Allmendinger, who made his first NASCAR start of 2019, failed inspection for the engine not being able to hold a vacuum when tested.

Regardless, Kaulig Racing led 86 of 100 laps in the race. In 122 prior starts in the series, the team had led just 93 circuits. Its best finish coming into Daytona was a fourth by Austin Dillon earlier this year at Las Vegas. It bettered that with two of its teams.

Because Allmendinger’s No. 10 car failed inspection, Christopher Bell moved up to third, with Austin Cindric and Stephen Leicht rounding out the top five. For Leicht, it’s his first top-five finish since 2007, when he was competing full-time for Yates Racing.

While Monster Energy NASCAR Cup Series teams were dealing with lightning in Daytona, the IMSA WeatherTech SportsCar Championship had a red flag of their own Sunday afternoon.  This red flag was for a different reason.

With 33 minutes remaining in the Mobil 1 SportsCar Grand Prix presented by Acura, something appeared to break on the Juncos Racing Cadillac DPi-V.R. driven by Victor Franzoni.  Franzoni entered turn 2 and simply lost control.  The broadcast booth on CNBC indicated that Franzoni had contact earlier in the race and that might have caused a failure on the car.  Franzoni slid through the paved runoff and broadsided the tire barrier.  The hit was hard enough to put Franzoni up on his side as the tires enveloped the Cadillac.

IMSA red-flagged the race so that track crews would have the proper time to get the tire barrier properly rebuilt and the Cadillac removed.  Franzoni was able to get out of the car (the position that it stopped in effectively trapped him in the car) after the car was moved slightly.  He was then loaded onto a stretcher and loaded into an ambulance while sitting upright.  Luckily, it appears that Franzoni is going to be ok.

Thanks for the messages! Special thanks to the @AMR_Social Safety team for their fast response. @VictorFranzoni has now been cleared from the hospital ??

The same cannot be said for Juncos Racing;s Cadillac, which was heavily damaged in the crash.  The team has four weeks to repair the car before Road America. – Phil Allaway

Some seriously weird shit this weekend. Not impressed. But hey, that’s me. T

Kb,
The man who prepared the race car told me very clearly many years ago, that you race against the teams in your own financial bracket and, you don’t crash the car. In last 18 years this man has pulled off a 6th at Talladega, a 3rd at Millington (since closed), a 10th at this year’s Daytona 500 and now a win yesterday. Celebrate them all for their perseverance this week. It’s been a long time coming…

If Austen Dillon!!!!!!! can win the Daytona 500 this guy can win the Firecracker! I don’t begrudge anyone a win in Cup. At least Haley doesn’t feel entitled.