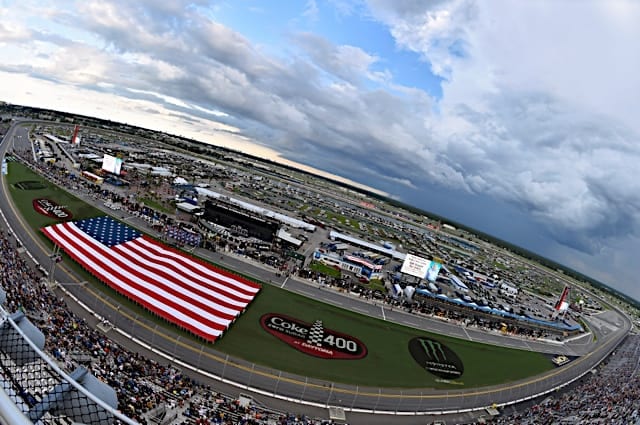 For the last 60 years, NASCAR has celebrated Independence Day in Daytona Beach.  Sadly, that tradition will come to an end next year.  The 400-mile Monster Energy NASCAR Cup Series race at Daytona International Speedway will shift to late August come 2020.

The Daytona/Indianapolis date swap was one of several changes which NASCAR announced for the 2020 schedule.

Most of the changes were good moves, particularly the scheduling of a night race at Martinsville Speedway.  Even the double-header at Pocono Raceway might turn out to be a positive surprise.  Daytona’s removal from Independence Day weekend, however, sticks out like a sore thumb as the most unwelcome scheduling change for next season.

Indianapolis is an odd choice for Independence Day weekend.  NASCAR traditionally held the Brickyard 400 in late July or early August, and one of the reasons for moving it to September was to get away from the heat.  If heat really is one of the reasons why attendance at Indy has suffered, moving its race back to July will not help matters.  As for racing at Daytona in the late summer, NASCAR better hope that there is no hurricane threat when the Cup Series comes to town next year.

But aside from whatever issues Indianapolis is facing, the biggest reason for this schedule change is clearly the playoffs.  Daytona’s summertime race has a well-earned reputation for being a wild, unpredictable event, even by superspeedway racing standards.  Under NASCAR’s current version of the playoff format, the postseason field gets set primarily by wins.  The thought is that Daytona offers the best opportunity for someone outside the playoff field to pull off a Jeremy Mayfield-style last-gasp win that earns them passage to the postseason.

Maybe Daytona would be a dramatic show.  Or maybe everyone would race super conservatively in an effort to protect their playoff positions.  Perhaps we could get another complete shocker of a winner like Justin Haley, who was declared the victor on Sunday evening after a long, rainy weekend.

Nobody really knows what will happen at Daytona in the summer, but whatever does happen will probably have high entertainment value.  NASCAR is no different than other modern American professional sports which mix entertainment with athletic competition.  There has always been an element of entertainment to professional stock car racing, even back in days when Bill France and his associates laid out a plan to make their brand of racing professional in the first place.

But ever since NASCAR instituted the original version of the playoffs in 2004, known as the Chase for the Nextel Cup, the balance has been shifting more to the entertainment side.  The elimination-style playoffs, with its multitude of automatic advancements, points resets, and a final winner-take-all race, upped the entertainment factor even more.  Judging by this comment from NASCAR President Steve Phelps, the sanctioning body has no problem with that.

I asked @StevePhelps if full throttle racing is becoming of the highest level of a motorsport.

"What are we looking for is what is the most entertaining race. If that means fill throttle racing, that is the racing we are going to have."

Phelps, in fairness, was referencing the 2019 Cup Series aero package and not the playoffs.  Yet the same philosophy underlies both the playoffs and the rules package.  If cutting back horsepower so much that drivers can run wide open around intermediate tracks is more entertaining, NASCAR will do it.  If constantly resetting and reshuffling the points standings creates a more entertaining championship battle, NASCAR will do it.

Obviously, this mentality is a short-sighted approach that invites controversy.  If NASCAR continues on the pathway toward entertainment above all else, at what point does it start to lose legitimacy?  Remember that one of France and company’s central goals was to organize stock car racing in such a way that they could crown a definitive national champion.  Over the years, as NASCAR expanded and competing stock car leagues fell by the wayside, the sanctioning body which France founded eventually lived up to its goal of determining a national champion.

NASCAR still awards championships at the end of the season, but the current system places too much emphasis on the final 10 races of the year.  The drivers who reach the championship race are often not an accurate representation of the best four drivers during the whole season.

It is also fair to question whether a winner-take-all race among these foursomes is a proper way to determine a championship-worthy season.  However, NASCAR has doggedly defended all its variants of the playoffs over the last 15 years despite the obvious flaws.

Likewise, entertainment is not a good reason to end the regular season at Daytona.  The end of Sunday’s race is a great example why.  After a big wreck wiped out most of the field, NASCAR attempted to restart the race with bad weather quickly advancing on DIS.  Race control gave the field the one to go signal, prompting leader Kurt Busch to head to pit road.  Haley stayed out, intending to lead the field to green, but lightning in the area of the track forced NASCAR to stop the race.  The race nearly resumed once the weather appeared to clear up, but more lightning caused another hold, during which the rain began.  With additional rain in the forecast, NASCAR called the race.

What if next year’s summer Daytona race gets decided in a similar fashion?  Is this really how the final playoff field should be set?  No disrespect is meant to Haley or Spire Motorsports.  They dodged the crash and made the right pit call at the right time.  But just imagine if a driver were to advance to the postseason that way.  Haley may not be eligible for the Cup Series playoffs, but the next driver who gets a win like he did probably will be.  And while Haley and the No. 77 team should celebrate their win, we should not overlook the circumstances and timing of events, and luck that contributed to their victory.

Hopefully, the regular season-ending race at Daytona will not last long.  NASCAR had to learn its lesson the hard way with the Southern 500, but that race did eventually return to its traditional Labor Day weekend slot.  Daytona could very well return to Independence Day, but it is still a shame that the race is being moved in the first place.

Seeing a 60-year-old tradition scrapped to enhance the race to a flawed playoff is hard to take.  But in NASCAR’s determination to legitimize its playoffs, apparently anything can be sacrificed on the altar of entertainment.

Seen Phelps in interviews, what a ROBOT. Not that he is spewing the usual Castle Daytona BS. He seems very much “removed” or disinterested in the mistakes this company is making for their perceived bottom line. Yes they got the coveted rights of TV from the one with ADDICTION issues negotiated. However, imo they are missing bigly the bigger, and most important picture. The human element. The fans in the stands, in the MOHO park, etc. It is a tradition, a celebration, etc. And that is truly what makes the heart sad. Yeah, I said it and mean it.

Indianapolis, like the chase, should be labeled as a failed experiment & cast aside.

“None are so blind as those who will not see.”

There’s more than one CAPTAIN OBLIVIOUS in the ivory tower.

Nothing is going to help Indy attract a crowd unless they put the race back on the short track. It was an interesting experiment, but once the ‘new’ wore off is became nothing but a gimmick. Just like the entire ‘chase’, ‘playoff’, let’s pretend there’s a champ nonsense. Holding a throttle wide open doesn’t take skill, just b*lls. Even drag races use the throttle to keep the cars straight. So disappointing.

The track is not the problem. I went to Talladega twice a year and Daytona at least once every year back in the 70’s and early 80’s, and the race was never boring – almost always kept the fans on their feet for half the race or more. Do you know that the drivers, in the draft or not, had to lift almost completely off the gas in the turns at both of those tracks in those years? The problem is the aerodynamics and other artificial factors injected into the racing. The problem is “stock” cars that in no way even remotely resemble stock cars. Real race cars, held to the track by tire rubber and the mechanics of suspension without aerodynamic downforce, can and did produce exciting racing on any track.

Spot on. Chasing cheap “entertainment” at the expense of the sport’s legitimacy is the act of a failing leadership.

The most disappointing part is that Steve Phelps went on a media tour just a few months ago apologizing for NASCARs actions in recent years, and vowing that never again will they chase the mythical “new fans” at the expense of the core fan base. And here he is, mere months later, doing exactly that.

Agree 100%. On the balance beam of entertainment vs competition, NASCAR has continually tilted rules to increase entertainment. It isn’t arbitrary that NASCAR is often compared to wrestling by critics and fans of other sports.

Great article! It sure is sad to see such a tradition go by the wayside. It seems like NASCAR is heading down a slippery slope with this chase for the entertainment factor. I hope it realizes that it must return to a system that better determines a true champion for the season. But people love the unexpected, and it’s all about the ratings, baby. Maybe NASCAR will see the disillusion of its core fan base, but only time will tell. I enjoy your writing and analysis.

If it’s entertainment they’re after, then NASCAR should do trailer races on small figure 8 tracks. Would tie in especially well with the truck series…

It’s been suggested using school buses and they should drag prison wagons like in Hang ‘Em High filled with the “brain trust” from Daytona.

At what point does it begin to lose legitimacy? That boat has sailed – and the winner take all championship destroyed any last vestige of legitimacy left in the championship race.