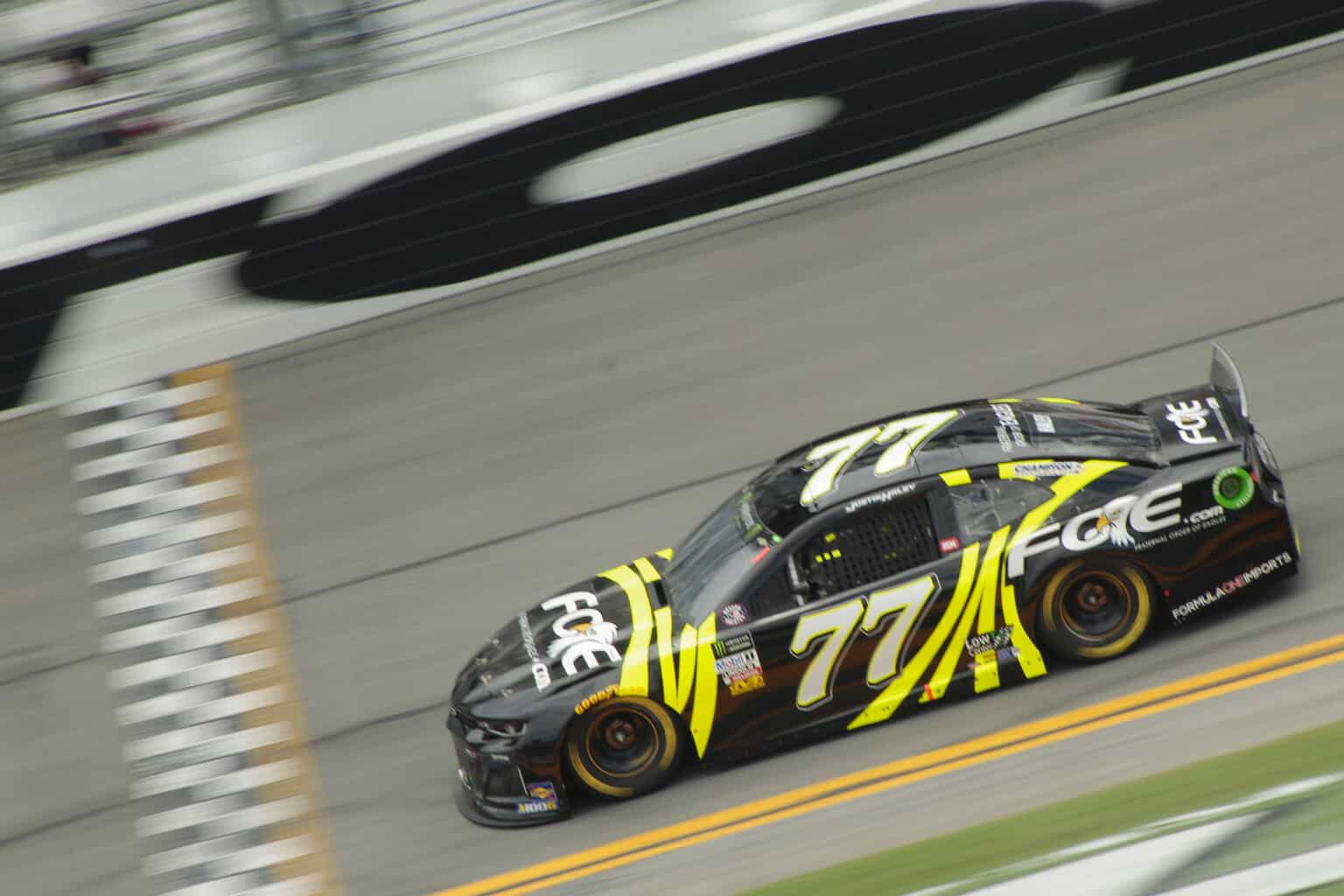 Justin Haley came into this weekend’s races at Daytona International Speedway thinking that he was owed a bit of justice after having his first career Xfinity Series win taken away for going below the yellow line last summer. He may have figured the score was as close to even as it would get when he finished second in Friday night’s Xfinity event. But the best retribution was delivered by a mass of dark clouds, lightning and unpredictable rain on Sunday (July 7).

Haley and his upstart team, Spire Motorsports, weren’t in Daytona chasing a win. The driver isn’t playoff eligible. The goals were to stay out of trouble, get Haley some seat time and scrounge up the best finish possible. Each of those objectives was a rousing success.

Haley and team stayed on the track after a field-decimating accident, while most of the competition made pits stops. Even after NASCAR informed the teams the race would be restarted in one lap, the No. 77 still didn’t pit. Then came the lightning strike that sent people scurrying, and the cars were sent to pit road. Haley had to endure a rollercoaster of emotions as the drivers were told to exit their cars, then called back to the cars, only to be told that the race couldn’t be restarted yet.

In the end, Haley was awarded his first career Monster Energy NASCAR Cup Series victory in just his third start.

After the race, Haley talked about how unexpected the outcome really was for him.

“It’s absolutely a blessing.  It’s pretty incredible that I have so many great people around me that have given me this opportunity to come to this level and the stage that we’re performing on. I never even saw myself running a Cup race until I got a call a few months ago to do Talladega, and it’s just unreal.  I don’t know how to feel.”

As is often the case at Daytona, there were plenty of underdogs sprinkled among the frontrunners. Ty Dillon landed his best career finish by coming home fourth. So too did sixth-place driver Corey LaJoie. Matt DiBenedetto didn’t lead like he did in February, but his eighth was a much better end result. Rookie Matt Tifft finished ninth, Landon Cassill 11th, JJ Yeley was 12th and Michael McDowell earned a 13th-place finish, which is his seventh top-15 finish in his last eight Daytona starts.

As for the NASCAR Xfinity Series, this week was another classic example of the field-evening power of Daytona and Talladega. Every position from fifth through 14th was occupied by an underfunded team when the checkered flag fell.

It was a banner night for the entire BJ McLeod Motorsports team as well, with Matt Mllis in 10th, Vinnie Miller in 11th and Stefan Parsons 12th. Parsons was making his Xfinity Series debut after Cody Ware was unable to run due to an illness. Interestingly enough, the BJMM cars started consecutively as well in 27th, 28th and 29th. Additionally, Gaulding’s teammate Ray Black Jr. overcame an early incident to finish 13th.

Scott Lagasse Jr. doesn’t have a single full-time year under his belt in ARCA, Xfinity or the NASCAR Gander Outdoors Truck Series. But don’t let that get you thinking that the St. Augustine native hasn’t enjoyed any success in his limited number of on-track ventures.

Lagasse is the son of former truck series driver Scott Lagasse. If you were to look at pictures from the inaugural truck season, you might notice a No. 24 truck painted just like Jeff Gordon’s rainbow car. But rather than Gordon behind the wheel, it was the elder Lagasse piloting that Dupont ride.

As for Scott Lagasse Jr., he has run a total of 70 Xfinity races, but only twice has he started more than seven in one year. Still, he has six top-10 finishes, with his best of sixth coming in the season opener at Daytona in 2017. Lagasse has 30 truck starts, with two top-five and five top-10 finishes at that level. He even has a pair of victories in ARCA competition in 2007, at Kansas and 2008 at Chicagoland.

For 2019, Lagasse has only raced in the two Xfinity events at Daytona, earning finishes of 21st in February in a JD Motorsports entry and 31st this past weekend driving for Rod Seig. While Lagasse may not be a permanent fixture on a national touring series, he most certainly is a capable one.

Thanks again @ronjons, awesome looking car in our first top 10 in cup ???? pic.twitter.com/lnb5vS1fjG

We said @brandonbrown_86 would crack the #XfinitySeries top 12 and the top 10 soon.

He did it with masterful run through the wrecks to take a career-best 6th place finish at Daytona, with a fantastic #NASCARSalutes paint scheme. pic.twitter.com/WOFUJRcQtu

It sure was a hot one today in the car. Just starting to feel better now. Proud of our @GoDriveSmart @RickWareRacing P12 finish today. Battled back from early pit penalty to get back on lead lap. We could have gambled for that P2 spot late but needed to put on 4 tires?‍♂️? pic.twitter.com/Q4mMkEFBc9