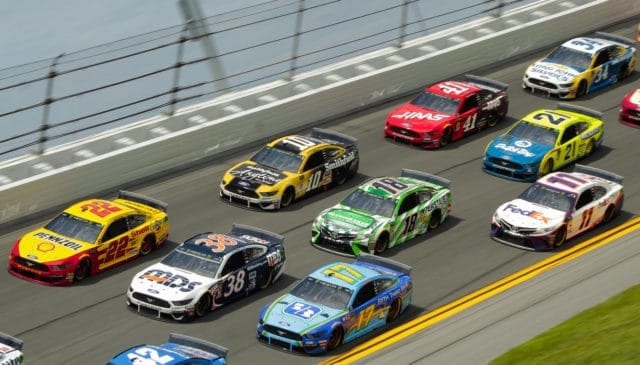 The final July 4 Weekend held at Daytona International Speedway did not go as planned for NASCAR. But sometimes that’s what happens.

Rain delayed the start of Friday’s Xfinity Series event, the Circle K Firecracker 250 Powered by Coca-Cola, for about three hours, starting after 10 p.m. local time when the green flag finally waved. And then Kaulig Racing finished 1-2-3 for the first time ever … until they didn’t, when third-place AJ Allemendinger was disqualified.

Then, Saturday night’s Coke Zero Sugar 400 in the Monster Energy NASCAR Cup Series was called off about an hour after the scheduled start time, pushing it into the daytime of early Sunday afternoon.

It seemed to be a relatively clean race for much of the event until a colossal crash at the front of the pack involved at least 19 cars, according to NBC’s graphics department. The inevitable storms rolled in, and three lightning strikes brought out the red flag for over an hour before the rain started falling. When NASCAR decided to call the race with 33 laps to go, Justin Haley was declared the winner in the No. 77 Chevrolet Camaro for Spire Motorsports.

Justin Haley had quite a weekend, getting his first career Cup win in his third career start in NASCAR’s premiere series. He also finished second on Friday night, his second top five and 12th top 10 in 16 Xfinity Series races so far in 2019. Haley also ran well in his Cup start at Talladega Superspeedway before getting involved in a late wreck, and is averaging a ninth-place finish in NXS.

Daniel Suarez has to be thrilled that he doesn’t have to race at Daytona again this year. The newest Stewart-Haas Racing driver has finished exactly one of six races at NASCAR’s most famous track in his Cup Series career. In his stint in the Xfinity Series, he’s crashed out of four of seven races there, and in one of two Gander Outdoors Truck Series races. This race he was a last-place 40th after an accident.

For the 2019 season, at the halfway point the driver of the No. 41 Ford Mustang has two top fives, six top 10s and an average finish of 15.7. He’s also fallen out of playoff position, currently holding the 17th spot in the standings.

William Byron will likely become the next driver to get his first Cup win, as the Hendrick Motorsports driver’s sophomore season has started to click in his first year with veteran crew chief Chad Knaus. Sunday’s race was only his first top five of the year, though he does have three poles and six top 10s, two more than his entire rookie year.

Clint Bowyer‘s seat in the No. 14 at SHR got even warmer after he and Austin Dillon started the Big One while racing for the lead. Bowyer now has five DNFs this season to go with five top fives and eight top 10s, and he’s wrecked out of three of the past four races.

For his career, Bowyer has four top fives and 12 top 10s at Daytona, with seven DNFs in 28 starts. This was the third consecutive event at the track that he wrecked.

Ryan Newman is doing well in his first year piloting the No. 6 Mustang for Roush Fenway Racing. His fifth-place run on Sunday was his first top five of the year, and his sixth top 10 of 2019. More importantly, it was his third top 10 in the past four races. He’s currently inside the playoff bubble, holding down the 16th spot for now, which no one really expected giving RFR’s results for much of the past decade.

Ryan Blaney is also unlikely to be disappointed about leaving Daytona for a while. In his nine starts at the track, five of them have ended early, including four of the past five. It was his third DNF of the season, though he’s still safely within the playoff field at 11th. For the season, he has five top fives and seven top 10s at the halfway mark.

Kurt Busch‘s camo-clad Global Poker scheme on the No. 1 Chevy Camaro wasn’t outstanding, and it was sort of a generic camo pattern, but the race damage (tape on the front end and a wide paintless scrape along the right side) gave it a look of improved authenticity, which would have looked quite nice in victory lane if not for an ill-timed bolt of lightning. Busch finished 10th anyway, continuing his solid season at Chip Ganassi Racing.

It’s not quite as hairy as February was, but Go Fas Racing had a good idea for how to use a rain delay wisely. Also, their car wound up sixth, an excellent result for Corey LaJoie and the No. 32 team.

Just think about it. @Justin_Haley_ is only 20 years old. The kid is incredibly mature. Got lucky today but is one hell of a race car driver.

Mark Martin had a lot of praise for Haley’s performance.

It’s off to Kentucky Speedway this weekend for a tripleheader of action across all three national series.

ThorSport Racing’s Ben Rhodes will repeat in the Truck Series’ Buckle Up in Your Truck 225 on Thursday, July 11 at 7:30 p.m. ET on Fox Sports 1.

In the Alsco 300 (Kentucky Edition) in the Xfinity Series, look for defending race champion Christopher Bell to cruise. This race will be Friday, July 12 at 7:30 p.m. ET on the NBC Sports Network.

Brad Keselowski and Joe Gibbs Racing drivers have been the only winners at the track in Cup, and five of the seven times the event has been run, the winner started on the front row. With that said, I think Martin Truex Jr. will make it three wins there in a row by taking the checkered flag in the Quaker State 400 presented by Walmart. Technically, both of his wins have come driving for Furniture Row Racing, but they were already a JGR satellite by then. This race will air on the NBC Sports Network on Saturday, July 13, at 7 p.m. ET.