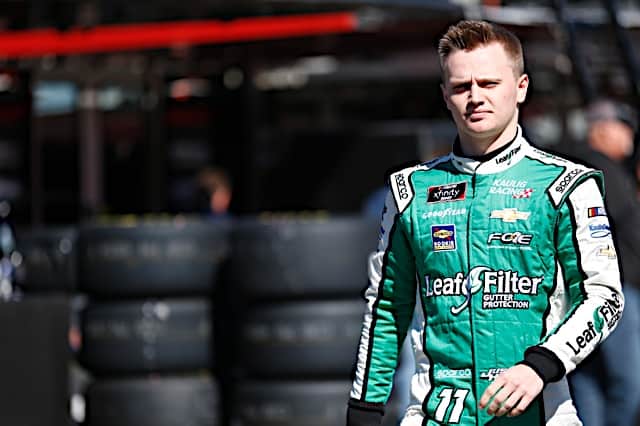 Sunday’s rain-shortened race at Daytona International Speedway in the Monster Energy NASCAR Cup Series proved to be one many people will never forget for several reasons. The racing was great but the winner surprised nearly everybody watching. Justin Haley is now a Cup winner in only his third career start while running the full Xfinity Series schedule for Kaulig Racing.

What potential do you see in Haley? Even if the win is a fluke, how far can he go in his career? Will he continue to fly under the radar or does he have superstar potential?

Meanwhile, as we have passed the halfway point in the 2019 season, there have been many interesting storylines to follow. Amongst all three national series, it has been quite an interesting year for the sport. One of these highlights was the All-Star Race back in May.

What was the best part of the night? What made it stand out from the rest?

Q: What’s your opinion of Justin Haley’s career so far? Even if his win is considered a “fluke” does he have a legitimate chance to be a winner once again at the Cup level someday? Aaron S., Seattle, WA

A: Haley has a bright future in the sport. I am not saying this because of one lucky Cup win, but because he has shown potential in the Xfinity and Truck series as well.

Right now, he is running better than Kaulig Racing has in the last few seasons in the Xfinity Series and has given the team their best season to date. They are pretty well guaranteed to make the playoffs unless something absolutely crazy happens and that will be their fourth straight appearance. Haley has a legitimate chance to win a race this season in the series, but a championship may be a little far fetched at this point.

The 20-year-old driver clearly has a lot of talent, as he has won races at every level, whether it was ARCA, K&N, or NASCAR’s top three series. One day, I am a firm believer that a competitive Cup team will hire him as their driver, even if it’s years down the road. He will win another Cup race at some point in time. He has a lot of time left in this sport, and he has already been in it for about five to six years.

A lot of people have given Haley hate for the Cup win at Daytona, even though he did what he had to do. He missed a wreck, stayed out when he was told to and happened to catch the rain at the right time and won the race. His first career win will always be known as arguably the biggest upset in NASCAR history, but I do not believe that is what Haley will be remembered for in this sport.

He has the potential to have a lot of success. He is humble, quiet, and minds his own business, while at the same time, driving the wheels off whatever he races. This Cup win has given him the spotlight now as he returns to his full-time Xfinity role for the rest of the season. The victory could help boost his confidence in that series and, who knows, maybe he will capture a win soon there.

Q: What has been the highlight of 2019 so far as we are now halfway through the season? John T., St. Louis, MO

A: One of the best highlights of the season, and possibly the biggest, was All-Star night in May. There was so much that happened that night, and the racing itself was spectacular.

Every stage finish in the Open was outstanding and the drivers went for it 100 percent of the time during the race. The best story from the Open was Bubba Wallace making it out of stage two and advancing to the All-Star Race. This happened a week after he spoke to the media about battling depression after dealing with some personal issues.

To add to that, we saw Kyle Larson advance from the final stage of the race and Alex Bowman win the fan vote. Larson would be a player the entire night.

Later in the All-Star Race, we saw incredible battles for the lead and throughout the pack, between multiple drivers. Eventually, it was Larson who took the checkered flag, becoming the first driver to win the race after advancing from the Open since Kasey Kahne in 2008.

The action wasn’t even over once the checkered flag had flown. On the cool down laps, Ryan Newman and Clint Bowyer got into it which led to Bowyer going over to Newman on pit road to give him a few punches to his head (while Newman was still sitting in his car with his helmet on, mind you). This capped off a very entertaining night at Charlotte Motor Speedway.

There have been several other interesting storylines thus far, such as the qualifying fight between Daniel Suarez and Michael McDowell, the domination between Joe Gibbs Racing and Team Penske, and Kyle Busch reaching 200 NASCAR wins. While all of these have been amazing to follow, the All-Star Race is the one that stands out for me.

When there is drama and excitement for an entire night between two different races, that’s when you know it was a success. Many All-Star races in the recent past have not been very memorable due to the lack of excitement or just because nothing particularly special happened. However, I think this All-Star Race was an instant classic. Even if it’s only an exhibition race, it was one of the best races all year long to this point.

The season is still far from over, so there could be several more storylines to follow as we progress deeper into the year. 2019 has been an interesting year for the sport, that is for sure, and as we get into the summer, it will only get better, and more exciting to follow.

Sad NASCAR had to let already a long long long wait cheat spectators out of a non competitive, no competition back marker who happened to stay out. To call that a winner is well I guess what they MUST call him, in name only. A person with honesty knows there wasn’t a fight, wasn’t a lap, there was nothing. He even admitted as such..so why the hoopla as he actually BEAT the CUPPERS? HE DID NOT! And don’t make me explain the word beat to you people.The big race of the holiday weekend they gave it away and robbed the patient holdovers in the stands! He didn’t win anything, he didn’t beat the “big guys”, he did none of those things. Yeah, yeah he got the trophy it will be milked till the teats are dry and the cow has long died. Typical NASCAR reporting.

kB
It’s a legit win, no different than playing a fuel strategy or a pit strategy. Casey Mears got his first win that way and so did Chris Bueshler. Give the man and his team their just due. Haley is a cup winner, just like Greg Sachs, Ron Bouchard, Bobby Hillin, Derrike Cope, and Regan Smith. He just did it more unconventionally. And congrats to Premium who prepared the race car

The only thing wrong with this past weekend was the start time of the race on Sunday, but NBC claims that was influenced by the Women’s World Cup Final broadcast time.

If they start that race even one hour earlier, they finish the race easily, I think.

The best highlight is not having to worry about Brian’s next brilliant idea for his product.

Might be legitimate, but sure would give me second thoughts of going back, especially considering the cost. If I want entertainment instead of racing, I have Netflix.