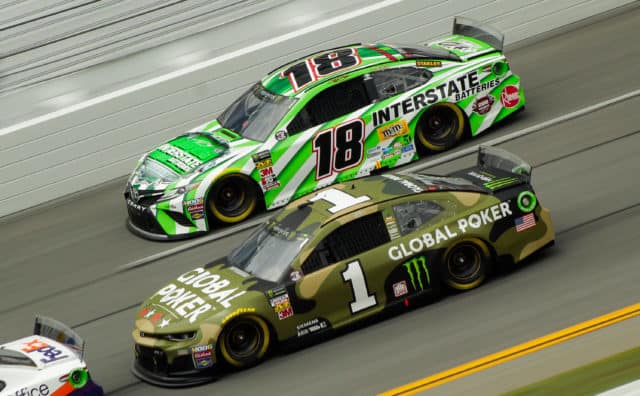 After getting delayed more than 12 hours due to rain, the Monster Energy NASCAR Cup Series was back in action at Daytona International Speedway and did not disappoint. The racing was electric with the threat of rain throughout the day, and when it was all said and done, 20-year-old Justin Haley scored his first career win in a rain-shortened race.

For many of the top teams, it was a rough day for them and specifically their pocketbooks. The Big One struck on lap 120 and collected many of the top cars including Chase Elliott, Ryan Blaney and Clint Bowyer, to name a few. Did these drivers make it in the top 12 even with their unfortunate ending at the World Center of Racing?

Here’s how Haley’s surprise victory – and the Big One – factored into this week’s power rankings.

For Joey Logano, it was more of a “survive and move on” kind of race. The defending champ looked to be on his way but was swallowed up by a gaggle of crashing cars and ended up finishing 25th, two laps down.

Had a rocket today at @DISupdates, but unfortunately we were clipped on the final “Big One” right before the rain came in. We’ll leave the #CokeZeroSugar400 with a 27th-place finish and head to @KySpeedway next week pic.twitter.com/oNKfmmZZ1D

For Busch, like Logano, it was all about surviving. Also like Logano, Busch got some damage from the Big One but not as bad as some others and Busch went on to finish 12th.

Busch heads to Kentucky where he has won twice in nine starts with an average finish of fifth. Could he win for the first time since Pocono?

Like his other three teammates, Truex was also caught up in the mess that sent 18 cars every which way but up on Sunday afternoon. On the bright side, he heads to the place where he is undefeated in stage racing  and winner of the past two cup races: Kentucky Speedway.

“He should be a threat to win this weekend at Kentucky.” – Kobe Lambeth, KobeLambeth.com

It was a rough day at the office for Harvick and his team as they were caught up in multiple incidents through the day on Sunday. They first got into Brad Keselowski which sent Keselowski into the fence with minimal damage to the No. 4. Then Harvick cut a tire down and spun it into the fence with a little damage.

To top it off? His tire exploded when he headed down pit road for the red flag for the rain delay.

Another unimpressive day in a season that’s been much of the same for Harvick.

“That win is around the corner, then look out!”  – Godwin Kelly, Daytona Beach News-Journal

“If you told me that Spire Motorsports won a race before Kevin Harvick, prior to the season, I would laugh for days.” – Lambeth

If you thought Harvick had a rough day, Keselowski would tell you to hold his Miller Lite as he had a rough weekend. The 2012 champion got into William Byron in practice and told NBC that he would not be lifting for anybody. However, during the race, Harvick was the one that didn’t lift when he got into the back bumper of Keselowski which sent him into the wall, ending his day at Daytona.

We are excited to share that baby Keselowski is a …☺️@PaigeKeselowski pic.twitter.com/wFpIzNKEPJ

“The “not lifting” mentality came around to haunt Brad on race day.” – Adam Cheek, Frontstretch.com

“Congrats to the Keselowski family on the little girl coming soon.” –Lambeth,

Just like his other three teammates, Hamlin was charging up the field and was caught up in the melee on lap 120.

Man. 2nd speedway race we got wrecked inside top 5. Luck of the draw I guess. Not all blocks have to be made. Wish more guys would have that mentality. Live to race another lap. Only 1 block is necessary, it’s on the last lap.

Unlike Keselowski and Harvick, Busch had a solid day going until he went down pit road right before the lightning struck. If Busch would’ve stayed out, he would have been the Coke Zero Sugar 400 winner. His crew chief, however, Matt McCall was looking at the radar and, while he thought they were going to back to racing after the delay, Mother Nature had other plans and gave the victory to Justin Haley.

Just been that kind of season for Busch and the No. 1 team…

At least, he could joke about it after the race, right?

“Don’t talk about lightning bolts around this man for a while. Quite a while.” –Kelly

“He never wants to experience a storm again. The lightning will only cause FLASHbacks (pun intended).” –Cheek

After riding around at the bottom of the track with his Chevy teammates, Bowman was caught up in the Big One on lap 120 that put him out of the race and out of contention from going back to back in the win column.

Don’t count him out at Kentucky though — he has been on fire lately. And on the bright side, he’s got a new paint scheme that will feature some dogs on it at Kentucky on Saturday!

Me: Let’s unveil a car with a doggo ?

Thanks for helping us show off the @nationwidekids 2019 paint scheme, Beck! ? Ready to wheel this thing at @kyspeedway this weekend pic.twitter.com/mx5oyWyN5n

Like his teammate Bowman, Elliott was also caught up in the Big One and finished with a DNF.

Saturday is just around the corner! We'll all get to watch @chaseelliott drive this beast in the Quaker State 400. That's my #MondayMotivation!!? pic.twitter.com/aC0vTyjdIc

To say it was an eventful weekend for Byron, would be an understatement. Byron got together with Keselowski in practice on Thursday which resulted in a backup car for the youngster. With qualifying canceled for rain, Byron had to start the race with a brand new car that had no laps on the track. He marched his way up to the front, avoided the Big One and ended up second when the red flag came and was called a little while later.

“Justin Haley prayed during that rain delay for Mother Nature to unleash her forces upon Daytona International Speedway. William Byron prayed for Haley’s No. 77 Chevrolet to fail post-race inspection. He came up one position short, but he has about one race of points margin over the playoff cut line.” –Kristi

“Perhaps Byron is trying emulate teammate Alex Bowman by starting his own streak of second-place finishes before a first win” –Ryan Holman, Ryan Holman on Youtube

“He is going to get his first Cup victory at some point before the season ends.” –Lambeth

It was a very solid day for Johnson and the No. 48 bunch as they were up in the top 10 for most of the day. He even avoided the Big One and scored his best finish of 2019.

Next on the agenda? Fly Fishing with his daughter for her ninth birthday.

That was the plan… hopefully we can find a day this week to put the waders on. https://t.co/NXMWuL7DBK

“Seven-time appears to be moving in the right direction.” –Lambeth

Dillon led 48 laps and was charging for his first victory since the 2018 Daytona 500. However, he made an aggressive move down to the bottom groove with the No. 14 of Bowyer following behind. The two made contact and Bowyer turned Dillon into the fence to start the 18-car wreck on lap 120.

Def one of the best race cars I’ve ever had. Disappointed in how everything went down and hate wrecking race cars but I’m here for @RCRracing. Trying to get them in the playoffs.