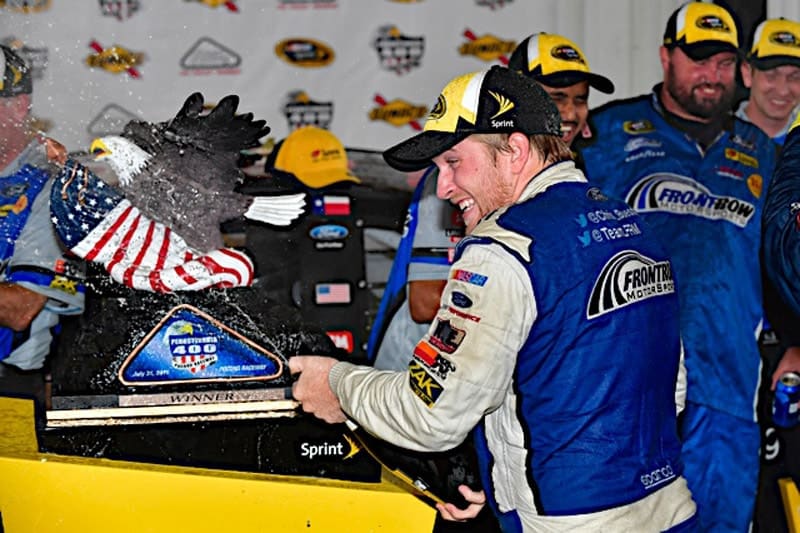 In August 2016, weather also played a role and forced an early ending. But the track wasn’t wet, and there wasn’t lightning in play.

It looks like something out of a movie. Fog so heavy that drivers couldn’t see the track and spotters couldn’t see the drivers. It rolled in over turn 1 and settled in for the long haul. Buescher had just taken over the race lead when NASCAR threw a yellow and then a red flag.  It was hard to fathom that the fog would not lift, but with no sun to burn it off, it forced NASCAR to call the race.

Buescher secured his first career win and the rest is history.

It’s almost hard to call this race, which came down to fuel mileage, a fluke because it wasn’t just one team that gambled and got lucky. It was a pack of teams that played the strategy game and won that night.

The top five included a first-time winner, three career-best finishes that would stand for the drivers’ entire careers, a veteran’s first top five in a decade and a team’s first ever top-five result. Most races, one of those finishes alone would make it a rarity. But all of them? That’s a lot of very good calls from pit road.

First-time winner Casey Mears, second-place JJ Yeley and fourth-place finisher Reed Sorenson all scored career-best finishes that would remain the best of their careers. Third-place Kyle Petty hadn’t scored a top five since September 1997. And the now-defunct Red Bull Racing team carted home its first top five with Brian Vickers behind the wheel. Whatever the circumstances, it’s a group fans could find it easy to get behind.

While it’s hard to imagine any of Johnson’s wins at the time being unlikely, as he was en route to six race wins and a fifth straight Cup title, this one certainly was. Johnson, not exactly known for his road course prowess, was running second to Marcos Ambrose, a road course race, under caution with just a handful of laps remaining.

Fuel was in short supply and drivers were shutting off the engines and coasting to save enough to make it to the finish. That’s when Ambrose made the mistake that cost him the race: he cut the engine going uphill. That doesn’t really work because, well, gravity. Ambrose rolled to almost a complete stop, allowing Johnson and several others to drive by before he could get the No. 47 refired.

Under NASCAR rules, drivers have to maintain pace car speed, and Ambrose was not allowed to retake the spot. That gave the lead to Johnson, who went on to win. It’s his only victory on a road course but will always be better remembered as one of the biggest brain cramps in recent NASCAR history.

Speaking of first-time road course wins, the stars had to align in Charlotte once again for Blaney to take his second career Cup win.

A late restart led to a bizarre multi-car crash in which the leaders piled into the turn 1 wall like lemmings falling off a cliff. Among the drivers left, Martin Truex Jr. and Johnson were running first and second on the final lap. Johnson, who hadn’t won in over a year and was running down leader Truex in a hurry, got hot in the chicane coming to the checkers, spinning both himself and Truex. That allowed Blaney to slip by for the win and a playoff transfer. It also gave him the distinction of being the first-ever winner on Charlotte’s new infield road course.

Sure, the car had won the same race the year prior, but that’s where the similarity ends. In 2001, veteran Sterling Marlin won the fall race at Charlotte, setting up for a 2002 campaign that saw him lead the points for 25 weeks. He was a definite title favorite before being injured in a crash at Kansas Speedway that ultimately ended his season.

Enter McMurray, a promising 26-year-old who had not yet won in any NASCAR national series. Already tagged to drive for Chip Ganassi Racing for 2003, he was pressed into service as Marlin’s replacement for the last six races of the year. Charlotte was just McMurray’s second career Cup Series start, and he showed that he could take Marlin’s car to the front. That’s not an easy task no matter how good the car is; substitute drivers have to drive a car set up for someone else and work with an unfamiliar crew.

McMurray led the first 96 laps of his career that night, including the last one, beating a charging Bobby Labonte in just his second start in the top series. He capped off the year with back-to-back Xfinity Series wins at Atlanta and Rockingham, his first wins in that series as well.