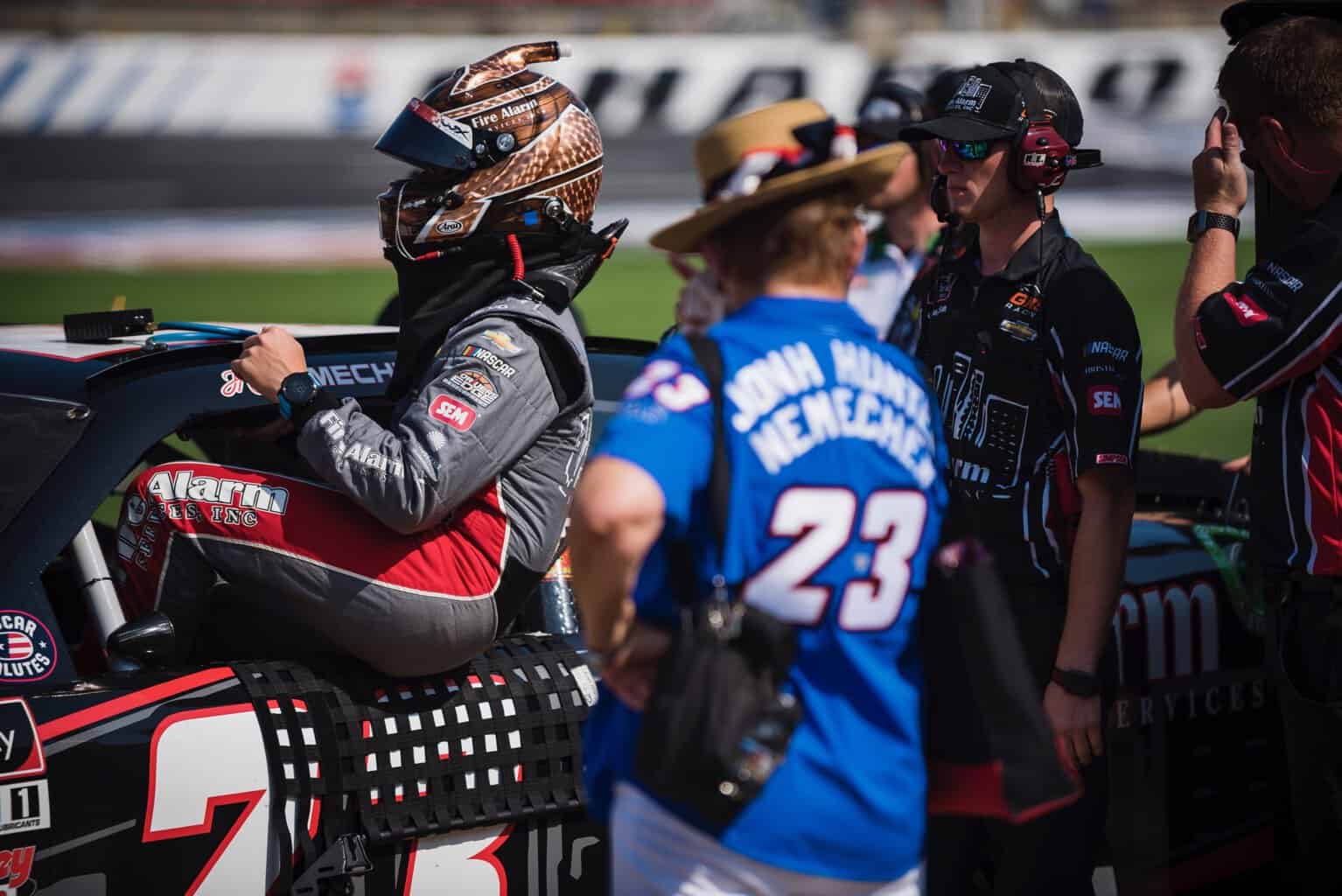 Growing up, almost every single child leans on their grandmother for some sort of life advice. Fortunately for John Hunter Nemechek, his grandmother, Martha, is obsessed with racing.

Nemechek, 22, is in the midst of his first full-time season in the NASCAR Xfinity Series with GMS Racing. But it’s well-known that the North Carolina native grew up around the racetrack, while his father, Joe Nemechek, was chasing his dream in Monster Energy NASCAR Cup Series racing.

While Nemechek’s parents were typically away from the track almost every weekend so his father could race, it was Martha who helped shape Nemechek into the person he is today.

“She was definitely a support system,” Nemechek told Frontstretch. “With dad racing every weekend, I was racing myself, so I had to figure out how to do my schoolwork. I pretty much grew up with the guys around the racetrack, but she was definitely a big influence on me. I had to make sure I got all A’s because I got rewarded for all A’s.”

What was Nemechek’s award for doing well in school? A nice, home-cooked salmon entree, sprinkled in with a “little bit of everything.”

“She’s definitely one of my biggest cheerleaders, if not the biggest, with everything going on,” Nemechek added. “She hasn’t been to a lot of races this year. She’s been around her great-grandchild, her first one that she’s spending a lot of time with. It’s definitely neat to have her do that and still being able to come to some races throughout the year.”

Most recently, Martha attended the Xfinity race at Charlotte Motor Speedway on Memorial Day Weekend. That day, FOX Sports captured a video mid-race of her jumping up and down, cheering on the No. 23 Chevrolet driven by her grandson. Nemechek led four laps on that afternoon, en route to a 12th-place finish.

Much like how Martha supported her son, Joe, she supports Nemechek with a handmade T-shirt that sports the No. 23.

“That goes back to when she came around the race track with dad back in the day in the Army car,” Nemechek stated. “She has a lot of fun coming to the racetrack. It’s sad to say, but they’re getting older, so the more times she can come around and do her deal is really a blast.

“I think the biggest thing for her is just enjoyment. Seeing me go around in circles, doing what I love and am passionate about. Our family has been involved in the sport forever. To have their support behind me – she’ll text me before and after every race, and I’ll normally get a call on Sunday morning asking what had happened [in the Xfinity race]. She’s definitely in tune with everything that’s going on.”

During the summer months, Nemechek’s grandparents will relocate to North Carolina. But through the cold winters, they spend their time in the warm, Florida sun. Ultimately, Martha will attend roughly “five-six” of her grandson’s races this season.

In his first season with GMS, Nemechek sits seventh in the championship standings, comfortably inside the playoff standings. With 10 top-10 finishes and an average finish of 10.9, he believes the team is starting to turn the corner, as the core team has been building chemistry since the opening weekend of the year at Daytona International Speedway.

Out of all current playoff eligible drivers, Nemechek is tied with Ryan Sieg for the fewest laps led (eight) through the first 16 races. However, the No. 23 team is consistently consistent, as its averaging finish position is less than one spot behind Cole Custer, who’s tied with Christopher Bell for the most wins in the series (four).

Nemechek vows he won’t stop until he and the No. 23 team are the best.

“I want to win some races. We need to get a little bit more consistent running inside the top five,” he explained. “I feel like we’ve been getting more speed built into our cars, and I’m learning as well from some of the places I’ve never raced an Xfinity car at. Some of this stuff is still new to me. I’m looking forward to going to a few more places and figuring it all out.

“I feel comfortable that we’ll be able to make the playoffs. I just want to make sure we win some stages, win some races and get some playoff points and hopefully go to [Homestead-Miami Speedway] and be in the [Championship] Four. If I didn’t say that, I wouldn’t be here doing this. I want to win, that’s the biggest thing.

“I want to make it to the top. My goal has always been to be able to be in a competitive car at the top and win races, win championships and become one of the best. I want to be the best, and there’s definitely nobody that’s outworking me or out-training me.”

The series heads to Kentucky Speedway this weekend, where Nemechek led 14 laps and passed Kyle Busch during the second stage to claim the stage win in a Chip Ganassi Racing car. Unfortunately, his Chevrolet lost voltage late, dropping him to seventh in the final rundown.

Nice feel good article. I’d feel better about this kid if he cleaned up his act, he takes dirty driving to a whole new level at times and it’s just not necessary. He’s his own worst enemy.