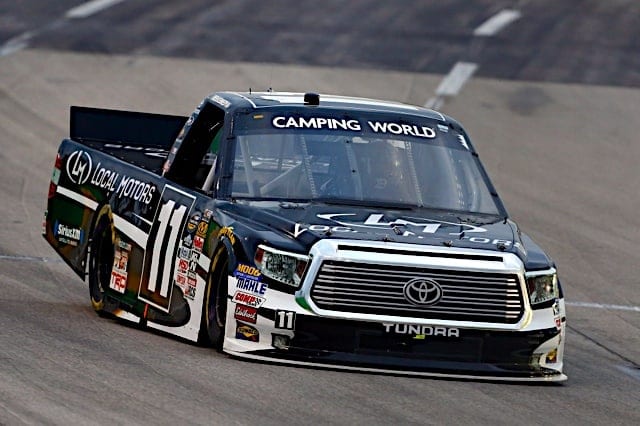 Today, many NASCAR fans will remember Carl Edwards for various reasons, whether they were a longtime fan or completely caught off guard by his sudden exit from the sport. But in 2003, no one really knew who he was aside from maybe MB Motorsports, the team that gave him seven starts during the 2002 season, or Roush Fenway Racing, which signed Edwards to race for its now-defunct Gander Outdoors Truck Series effort after seeing those starts the previous year.

With three DNFs in his first six races with Roush, it took Edwards almost all the way until the mid-point of the season before he found victory lane. He led just 40 laps after starting fifth but did what became his signature backflip after he won. Edwards went on to win twice more that season before finishing eighth in the championship standings.

John Wes Townley simply got loose and nearly spun just as Brad Keselowski pulled up alongside him. But instead of going all the way around, Townley simply straightened it out and kept on going. I’ll never understand why the caution flag flew other than the expectation that Townley would spin completely and end up hitting Keselowski. Instead, he was able to continue on to an 11th-place finish behind eventual winner Ty Dillon.

2015: Ben Kennedy Tangles With the Catchfence

Perhaps one of the scariest moments in Kentucky Speedway history came when Ben Kennedy took one heck of a ride along the catchfence. With just a handful of laps remaining, contact with Townley sent Kennedy’s truck up into the catchfence where it spun around and slid down the SAFER barrier before coming to rest on the track again. The extensive damage to the truck left people cringing, wondering whether Kennedy was severely injured. Kennedy managed to walk away from the incident, which happened just a week after Austin Dillon flew into the catchfence at Daytona International Speedway in the Monster Energy NASCAR Cup Series race.

The resulting damage forced the race to be called five laps shy of its full distance. Repairs to the catchfence could have taken as much as two hours, and NASCAR opted to cut it short, allowing track officials an ample amount of time to complete the repairs before the Xfinity and Cup series races that weekend. Matt Crafton walked away with his fourth of six wins that season but still came up shy in the championship hunt to champion Erik Jones and runner-up Tyler Reddick.

During the 2016 season, William Byron and crew chief Rudy Fugle seemed unstoppable. After scoring their first career victory at Kansas Speedway in May, finishes of 11th and 10th at Dover International Speedway and Charlotte Motor Speedway, respectively, gave way to three wins in four races, including the one at Kentucky. Byron’s fourth victory of the season put him in a tie with Kurt Busch for most wins by a rookie in the Truck Series The win was also the 51st for Kyle Busch Motorsports, which surpassed Roush as the winningest Truck Series team that night. In all likelihood, Byron, who went on to win a total of seven races that season, probably would have won the championship if not for a blown engine at ISM Raceway in the race that set the Championship 4.

For the final 20 laps of this race, Brandon Jones had the faster truck of the two, but Christopher Bell drove an absolutely flawless stretch on his way to the checkered flag. Jones got loose with about 10 laps remaining and had to spend his time catching up again instead of fighting for the lead and the win. But perhaps what’s more impressive is earlier in the race, Bell got sandwiched in the middle of a three-wide battle with Jones and Austin Cindric. After avoiding damage during that spin, he had the entire race to make up the lost ground en route to victory lane.

Exciting as I started working with @j66anderson today. He has done a great job in building his race team. I’m looking forward to being a part of it as it continues to grow towards the next level.