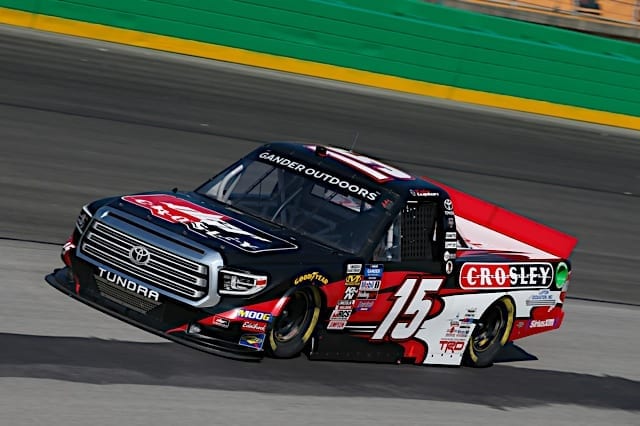 The past few years of Dylan Lupton‘s racing career haven’t gone at planned. But with back-to-back top-10 finishes in his first two starts with DGR-Crosley Racing has given the 25-year-old has his confidence back.

Lupton began the Buckle Up in Your Truck 225 at Kentucky Speedway in 20th position on Thursday (July 11) evening. By the end of the opening stage, the No. 15 truck had only gained a pair of positions to 18th. But avoiding the melee in a chaotic second stage, he was sitting pretty in third, earning eight stage points.

“It’s a blast racing in fast trucks,” Lupton said after the race. “I’m really fortunate being in this seat, and I just think we’re going to get better and better. I’m learning a ton racing with these guys and how to play with the aero. That’s the biggest thing, I don’t have much experience with these trucks. I feel like with each lap I get better, and really I think we can win one by the end of the year if we keep working at it.”

At Chicagoland Speedway — Lupton’s first start with DGR — he finished 10th after running the majority of the race inside the top 10. Most of the final two stages at Kentucky, the No. 15 was racing inside the top 10. Prior to joining the team, the California native thought running to this potential was a possibility.

“I set pretty high goals and standards for myself because I know I can do it, but this just kind of solidifies that,” Lupton said. “I knew if I came over here to DGR, I would be surrounded by a lot of talented individuals and that I would have an opportunity to run inside the top 10 and top five.

“To bring home a 10th at Chicago and a fifth-place here at Kentucky, the trucks are clean and we’re going to keep building off of it. I’ve got a little bit of a break until Bristol, but I’m going to enjoy this one.”

Prior to the past two truck races, Lupton had just two career starts in the Truck Series coming in 2016. But he also spent more than a year not competing in any of the top three national touring divisions, going from the Xfinity Series race at Pocono in June 2018, all the way to Chicago at the end of June this year without making laps.

That was a tough pill to swallow for Lupton, but he’s excited about what the future holds.

“It’s been a roller coaster,” Lupton said of the past year. “I’ve had a blast racing NASCAR but haven’t been able to go full-time, just trying to get any opportunity that I was given. This is really the first time I can showcase my talent and I’m just having a blast right now.”

David Gilliland, co-owner of DGR-Crosley Racing, backed up Lupton’s statement, noting that he’s seen a boost in confidence from the young driver.

“It’s incredible. Dylan’s done a great job, he’s had really good speed,” Gilliland told Frontstretch. “His confidence was really, really down when he came to our team. I’ve watched him race and I know he can do it. … We’re really proud of what we’re building at DGR-Crosley and what Dylan’s been able to do. I’m looking forward to great things and keep building with him. We’re really excited to have him as a part of the team.

“They’ve already talked about adding a couple more races which is awesome for both of us. Just continuing to grow, build and get better.”