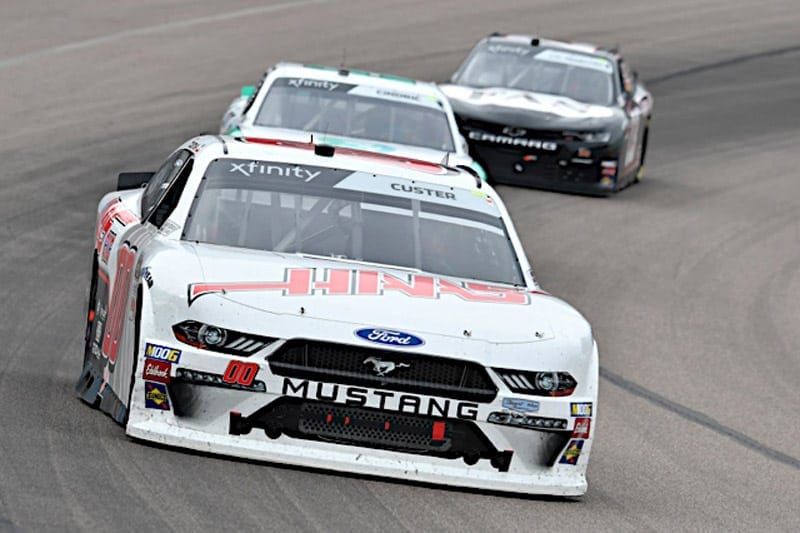 There’s a great rivalry brewing in the NASCAR garage, one filled with stars from various backgrounds competing for different manufacturers and each bringing their own personality and flavor to the championship chase.

Here’s the thing, though – it isn’t in the Monster Energy NASCAR Cup Series. NASCAR’s best young rivalry is growing in the Xfinity Series.

Last season NASCAR media and fans spent the majority of the season discussing the Big Three, a term given to Kyle Busch, Kevin Harvick and Martin Truex Jr. as they spent a large swath of the season dominating the Cup Series. The term dominated headlines through the summer and fall but quickly faded from conversation after Joey Logano‘s unexpected drive to a Championship 4 triumph at Homestead-Miami Speedway.

But while the term may have disappeared, the concept is alive and well in NASCAR’s second tour. Daniel Hemric graduated to the Cup Series after a deep playoff run in 2018, but the other three drivers from the last year’s Championship 4 have returned in dominant form.

Christopher Bell entered 2019 as a favorite after his seven-win 2018 and took little time to live up to expectation. Fresh off of a third-consecutive Chili Bowl Nationals win, the dirt star returned to NASCAR with a win in the second race of the year at Atlanta Motor Speedway. He’s since tacked on three additional wins, placing him in a tie for the most wins in the series.

Bell’s win total has been matched by Cole Custer. With crew chief Mike Shiplett — an unexpected addition to the team after Chip Ganassi Racing shuttered its own Xfinity Series program — Custer and Stewart-Haas Racing have become a consistent threat to win. The Californian has won as many times in the opening five months of 2019 as he had in five years of national series starts beforehand.

Bell and Custer have led the series win trips to victory lane, but they each find themselves trailing another driver in the standings amid NASCAR’s summer stretch. It’s the same driver they lost to in surprising fashion at Homestead last November.

No one knew what to expect from Reddick in 2019. His title run in a one-off year with JR Motorsports was largely deemed a fluke — a championship season filled with inconsistency but bookended by wins at Daytona International Speedway and Homestead. The latter win came as a surprise after a consistent playoff run, delivering Reddick a shocking title after he snuck into the Championship 4.

Reddick made major changes heading into 2019, foregoing JRM to leap to Richard Childress Racing. He couldn’t match the Daytona win from 2018 but in the months since has set about proving that he deserves to be called a champion. The 23-year-old opened the season with 11 top fives and three victories in the opening 14 races, surging to a sizable lead in the regular season standings.

In the midst of a dominant 2019, the Xfinity Series’ top trio has placed a stranglehold on the series. Michael Annett won the opening race of the year and all-time wins leader Kyle Busch scored his usual burst of victories in the opening six weeks of the year. But from Bristol Motor Speedway in April through Chicagoland Speedway in June, Xfinity’s Big Three combined to earn nine consecutive wins, a stretch that falls just one win shy of their victory total from the entirety of 2018.

No one driver dominated the stretch. In fact, none of the trio managed to win back-to-back races. Instead they all continuously pushed each other, fighting through a vicious game of one-upmanship that elevated all three drivers into a league of their own.

The rest of the field has been left to battle for an opportunity to be best in class. They all sit over a dozen playoff points behind the top trio, condemned to fight amongst each other in the postseason without wins or poor luck for the Big Three.

At one point it seemed there would be a fourth dominant driver. Ross Chastain appeared poised for a ride with CGR, due for a chance at an Xfinity Series title. But the opportunity fell apart, leaving the Floridian scrambling and ultimately shifting to Gander Outdoors Truck Series points to chase a title with Niece Motorsports. He fittingly ended the Big Three’s streak with an emotional victory at Daytona, but has otherwise been left by the wayside.

With Chastain out, a host of different drivers have risen to contend for their own shot at a surprising title ascent.

Austin Cindric leads the group heading into today’s race at Kentucky Speedway, holding a slight advantage over Justin Allgaier as he searches for a career-elevating title run. Allgaier’s endured a quiet year after a five-win 2018 but is in position to make another playoff march if he can find consistency.

Steady improvement has seen Noah Gragson rise to sixth in the standings, while Truck Series standout John Hunter Nemechek and Daytona Cup spoiler Justin Haley sit just behind him in seventh and eight. Annett remains a distant threat after his breakthrough win in Daytona, and Charlotte Motor Speedway ROVAL winner Chase Briscoe has shown flashes with his six top fives, though consistency has proven difficult to find.

Reddick and Logano each showed in 2018 that topping a NASCAR tour’s best teams for the title is possible in the playoff era. But any hoping to accomplish the feat in 2019 are going to have to close a sizable gap to make it happen.

The Xfinity Series’ Big Three have proven themselves to be a cut above the field this year. With luck the trio will rise up to Cup in the near future and continue their rivalry on NASCAR’s top step.

But if you’re waiting until then to watch them battle, then you’re missing out on one of the highlights of the 2019 season.