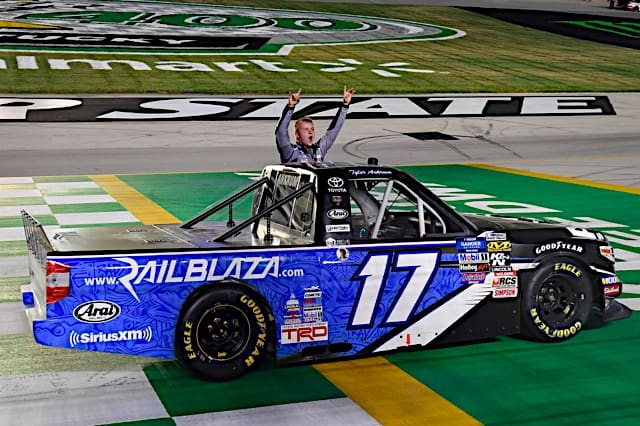 In a Nutshell: Tyler Ankrum scored his first career Gander Outdoors Truck Series win in Thursday night’s Buckle Up in Your Truck 225 at Kentucky Speedway. After Brett Moffitt ran out of fuel with just two laps remaining, the rookie, who led a race-high 40 laps, inherited the lead and held on to a more than seven-second victory over Stewart Friesen.

“I can’t thank everyone at DGR-Crosley enough: David [Gilliland], Bo [LeMastus], Bono [Kevin Manion] and everyone else for believing in me,” Ankrum said. “They work so hard day in and day out. I cannot believe that we just did this; it’s incredible. This is a dream come true. I’ve always doubted myself, and I think tonight is going to wash all that away.

“I have a great group of partners this year that have gotten me this far; without them none of this would even be possible. Toyota, Railblaza, Academy Sports, Modern Meat. This is incredible. It’s going to take a lot more work to chase a championship, but we are one step closer.”

Harrison Burton recovered to third after a late spin in stage two resulted in minor damage to the front end of the No. 18 Toyota. Ross Chastain and Dylan Lupton, who scored a career-best finish, rounded out the top five.

Austin Wayne Self snagged his best finish of 2019 with a sixth-place run, while Moffitt ended up seventh as the last truck on the lead lap. Spencer Davis, Jeb Burton and Johnny Sauter rounded out the top 10.

Early in stage two, Spencer Boyd made a bold move inside Natalie Decker but slid up the track, clipping Decker’s front end. The two spun hard into the outside wall and collected Jordan Anderson along the way.

Later, Decker expressed her displeasure with Boyd in the garage area.

Appears we got a conflict in the garage between Spencer Boyd and Natalie Decker. Credit to Jon Pittman for the great footage. #NASCAR pic.twitter.com/MB0y9pyGjl

It’s hard to fault Decker for being upset with Boyd. Whether it was actually necessary to snatch Boyd’s hat off of his head and throw it is debatable, but it’s easy to judge someone’s actions in the heat of the moment as an outsider. It’s clear Decker’s frustration at her performance throughout the season is really getting to her and likely has done a number on her confidence.

With just a handful of laps remaining in stage two, Grant Enfinger and Brandon Jones restarted side by side, and when Enfinger made the move inside Jones for the lead, he got loose and slid up the track, taking both drivers hard into the wall. It appeared Jones turned right after the initial contact and ensured Enfinger wouldn’t be able to continue.

The leaders get into each other and hit the wall! ? pic.twitter.com/liDBm81iWT

Once he emerged from the No. 51 Toyota, Jones gestured at Enfinger almost as if to ask what happened.

Enfinger accepted full responsibility for the incident that took two of the strongest trucks out of the race.

“I just screwed up. I lost a little bit on that restart and then got a big suck down the back straightaway going into Turn 3, and got separated enough, I felt like, to clear him and go ahead and slide up there, but I didn’t clear him all the way and just lost my air and wrecked it. You can’t really run side-by-side here. It’s all on me.

“I was trying to make something of it and it just didn’t pan out. I hate it for these ThorSport Racing guys, this Champion Power Equipment Ford F-150 definitely had a shot at going to victory lane here.” – Grant Enfinger

Though he appeared to be quite upset when he initially got out of his truck, Jones apparently had time to cool off as he was pretty level-headed in his comments after being taken out of the lead in a truck that was likely strong enough to win.

“I’d be curious to know what he (Grant Enfinger) said,” Jones said after he was released from the infield care center. “It’s tough. I’ve raced with Grant really hard. He races hard, but I don’t know. I asked him if he was upset about the restart. I waited really, really late to go, but that’s just me playing games. We’ve got to try to get the lead there. It was pretty cool that we got it.

“They’ve all been racing hard. A lot of wrecks early. I hate it. We had SoleusAir here. It’s their hometown. We had a really, really fast Toyota Tundra. It was looking like a repeat of Chicago with a better finish than what we had there too. I get one more with these guys. I hate for Rudy (Fugle, crew chief) and all them. They build great trucks every single week. They’ll keep coming and we’ll keep performing and we’ll get there.”

Perhaps what’s the most incredible part of the whole incident is that the pair crashed in front of the field and managed to only take each other out instead of a large chunk of the field.

After the checkered flag flew, Ben Rhodes went to Brennan Poole to share his displeasure with how Poole raced him as the laps ticked away. Poole apparently blocked Rhodes multiple times late, despite not being on the lead lap while the driver of the No. 99 Ford still had a shot at the win.

Later, Rhodes explained to ESPN Louisville why he was so upset.

Louisville native @benrhodes explains what happened between him and @brennanpoole as Rhodes was in contention for the win @KySpeedway late. pic.twitter.com/22bVvl6NEh

FOX messed up and missed this incident completely, so the only information we really have to go on is what can be found through the tweets of those who were at the track. Assuming Poole was blocking Rhodes as he described, there was a good reason for Rhodes to be upset, especially since he would be locked out of the playoffs at this time.

The guys are back in the garage trying to diagnose the issue. Needless to say our night is over. ? pic.twitter.com/0PoqsB42eR

We struggled big time today and the team @NieceMotorsport didn’t give up and we had a top 5 truck at the end. Proud of the effort. Ended up p9. Thank you @StateIndustries @alscoinc!!

“This win is super special,” said team co-owner Gilliland. “We couldn’t do it without the help of Bo [LeMastus], Toyota and all of our partners who have supported us since day one. We have a great group of people who left other opportunities to take a chance on our team. We are working so hard on developing something special and different at DGR-Crosley.

“I’m so proud of Tyler. I’ve been watching him race since he was 11 or 12 years old. To see these kids grow up and watch them move up and succeed within our organization is really special and something that we are really proud of. I’m so proud of every single person that we have at DGR-Crosley. This is awesome.”

Points Update: With just three races remaining in the regular season, Enfinger maintains his stronghold on the point lead by 52 markers over Friesen. Moffitt, Crafton and Rhodes round out the top five. Burton sits sixth in the standings, though he’s out of the playoff field at this time. Daytona winner Hill and winless Gilliland are seventh and eighth, respectively, while Creed and Sauter round out the top 10.

Chastain’s top-five run was enough to move him into the top 20 in points and put him in the playoffs at this time. He’ll join the other four winners this season in Hill, Moffitt, Sauter and Ankrum in the championship battle, along with three drivers yet to be determined. Barring disaster in these next three races, Enfinger will likely take the regular season championship to take the sixth spot in the Round of 8. As of right now, Friesen and Crafton would be the final two drivers to make the playoffs, locking Kyle Busch Motorsports out of the championship battle altogether.

Looks like my guys are gonna have to report to the Nascar RandD center Monday to start working on our pocono truck.

What a night! First top 5 in @NASCAR tonight at @KySpeedway! My @DGR_Crosley crew did a hell of a job making adjustments throughout the race. Can't wait for my next truck race at Bristol! pic.twitter.com/b1Hw9RKfJs

Up Next: The Gander Outdoors Truck Series heads to Pocono Raceway in two weeks. Coverage for the Gander RV 150 begins at 1 p.m. ET Saturday, July 27 on FOX. The race can also be heard on your local MRN affiliate or SiriusXM NASCAR Channel 90.